"Jewish bankers were prepared to offer favorable loan terms if the government made a gesture toward the Jewish People," the passage reads. 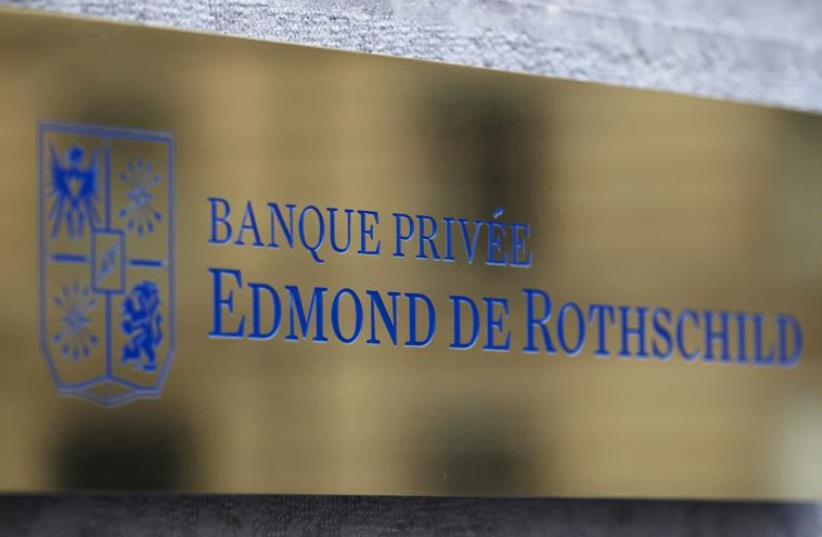 A logo of Banque Privee Edmond de Rothschild is seen on the bank building in Geneva
(photo credit: REUTERS)
Advertisement
A Dutch publisher defended an assertion in a history textbook for high school students that said that cash-strapped Britain’s support for Zionism owed to its desire to woo rich Jewish bankers.The book "Theme Workbook – The Middle East," published by ThiemeMeulenhoff and intended for students attending pre-university secondary education - the highest scholastic track in the Dutch education system for minors, is “anti-Semitic,” Likoed Nederland, a pro-Israel local association named after the Israeli ruling party, said in a statement Wednesday.“The British government was in urgent need of money during World War I,” the book reads on page 23, which explores the reasons for the Balfour Declaration. Issued in 1917 by the British minister responsible for the colonies, it said Britain viewed favorably the establishment of a national home for Jews in what would later become the Mandate over Palestine."Jewish bankers were prepared to offer favorable loan terms if the government made a gesture toward the Jewish People," the passage reads. The book also states that "the Holocaust led to the establishment of Israel" - a fact Zionists dispute citing the Balfour declaration and League of Nations resolutions.ThiemeMeulenhoff defended both assertions, stating that the Holocaust "had a role" in Israel's creation and that although "there was no Jewish global conspiracy," Jewish power was overestimated at the time, leading to the impression that such a gesture would be beneficial. The publisher disputed the presence of any anti-Semitic texts in the book.The publisher declined to correct these texts and 35 other points that Likoed Nederland disputed, including the assertion that Egypt, which became independent in 1922, was under British occupation until 1956, and that Israel was "born of injustice and based on injustice."ThiemeMeulenhoff argued the injustice was the Holocaust. It accepted four corrections, including the date which the term "Palestine" was applied to the area and the book’s inflated number of dead at Dir Yassin - the site of an atrocity perpetrated by Jewish fighters in 1948 against some 120 Arab civilians.The two additional corrections ThiemeMeulenhoff accepted were of the assertion that discrimination against Arab Israelis means they are not allowed to buy land, and that they are excluded from serving in the Israeli army and from subsequent benefits.