Members of the tiny community believe it will survive, despite its low numbers. 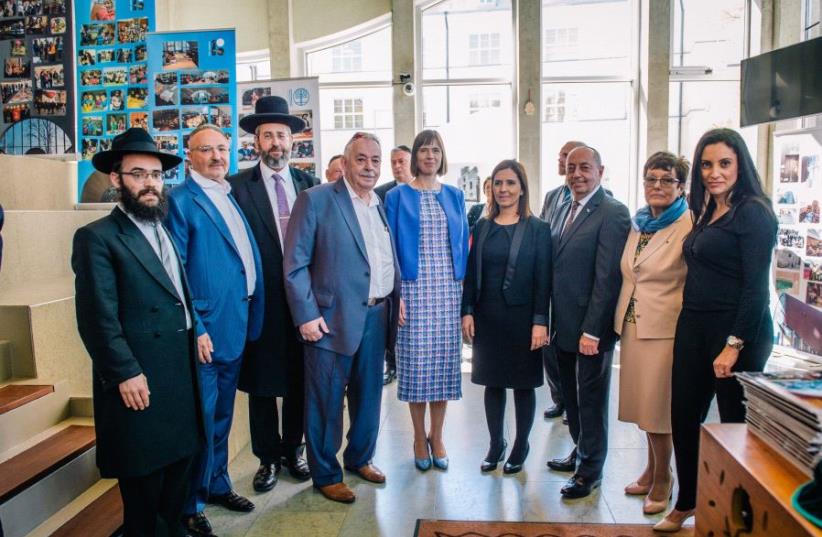 Estonian President Kersti Kaljulaid (center) pictured with other dignataries in the celebration of the 10th Anniversary for the establishment of the first Jewish community center built in Estonia since the Holocaust, May 25 2017.
(photo credit: ELENA RUDI)
Advertisement
TALLINN – “We will be here forever,” a veteran member of the Estonian capital’s tiny Jewish community told The Jerusalem Post during a celebration of the community center’s 10th anniversary on Thursday.Estonia was the first country to be declared Juden-Frei (Free from Jews) at Germany’s Wannsee Conference 75 years ago. Though thousands returned after the Holocaust, Jewish life was stifled by the Soviet regime and saw another drastic decline in its community after the fall of Communism in 1989, when many Jews emigrated.“In the Soviet Union, we had a corner, a little synagogue, half hidden,” recalls Peisah Kozlovski, 65. He said life before the establishment of Tallinn’s new synagogue was “gloomy.”“Life started after Estonia became free, and especially with this synagogue,” he remarked. “The community has changed a lot with the arrival of our [Chief] Rabbi [Shmuel Kot], who united all of us and made this life very interesting. We have a lot of friends, we come together – it’s a point of meeting. We go to shul and then to a cafe next door,” he said, smiling.The community currently numbers some 2,000 – natives alongside Israelis and other immigrants – but its members are confident in its continuity.“The numbers don’t matter,” Kozlovski said. “We have a lot of children; it will grow.It will not be big, but still we are forever, like Israel.”“Estonia is a good place for the Jewish people,” agreed Eric Kachkovsky, 30. “We don’t feel any antisemitism and we feel treated very warmly.”Russian native Aaron Raihshtein recalled the synagogue’s early days when it was only possible to convene a minyan once a week. Now they have one every day. He describes Jewish life in the city as “blooming,” and his fiancée, Ester Volskii, discussed her plans to open the first kosher grocery store there.Given the size of Estonia’s population, 1.3 million, it’s natural that its minorities are small. Foreign Minister Sven Mikser said: “We are so few that everyone counts.”“I think the Jewish community is one of most active, both politically and culturally,” he told the Post, adding that he doesn’t see any reason it won’t survive. Though he was unable to attend the celebration as it coincided with the NATO summit, other Estonian and European officials did, including Estonian President Kersti Kaljulaid, who delivered a speech inside the beautiful, modern synagogue.“The story of the synagogue of Tallinn tells us about the fate of the Jewish community,” she told the audience. “Estonia is proud of the fact that the country today has a flourishing and happy Jewish life. The history of the local community, as the history of the country itself, has experienced tragedies and revivals, from the years of the Holocaust, which tell us the tragedy and the difficulty of occupation, to the flourishing recent years of free, democratic and independent Estonia.Today, the synagogue is a beautiful and a clear indication of the importance of freedom.”Estonia granted the Jews cultural autonomy in 1926. It was renounced in 1940, and restored in 1993 after Estonia regained independence and passed a law granting minorities the right to preserve their national identities.“Our two nations shared both the joyous and difficult times in which we lived together and on which we have to speak more clearly. Both nations have had to fight for their existence. I must recall with gratitude those 178 Jewish women and men who participated in the Estonian War of Independence. Both of our nations know what it means to keep your identity and freedom even under the pressure of foreign powers, and we can be proud of their achievements,” the president stated.Other prominent figures at the event included Estonian Parliament Speaker Eiki Nestor and European Commission Vice President Andrus Ansip.Social Equality Minister Gila Gamliel and Chief Rabbi David Lau flew in from Israel for the occasion.In addition to the synagogue, the center includes a school, a kosher restaurant and a Jewish museum. The building was named Beit Bella, after the mother of Jewish businessman and philanthropist Alexander Bronstein, who funded the community center. Boris Oks, chairman of the board of the Jewish community, recalled how the local architects had never seen a synagogue before, so they were sent to Israel to get a feel for Jewish houses of prayer.The guests toured the center and watched a show put on for them by the schoolchildren.In honor of Jerusalem Day, the youngsters sang Hebrew songs about Jerusalem, with an impressive command of the language, and enacted a play about the city.Jewish community chairman Alla Jakobson lauded the Israeli officials for their participation, saying that their presence gave support and strength to the children and community.“After World War II, Tallinn was the only capital in Europe with no rabbi, and we realized we needed a synagogue,” Jakobson said in a speech to the attendees. “Ten years for Jewish history is nothing – our history is long – but for our community, it is life,” she said.Referencing a 100th anniversary celebration she attended in Helsinki, she wondered whether her community would be able to celebrate the same milestone. “I hope it will,” she added.