She also met with Sintayehu Shifaraw, the runner up of the International Bible Quiz before the competition.

By IRIS GEORLETTE
APRIL 22, 2018 17:16
Justice Minister Ayelet Shaked meets members of the Jewish community in Addis Ababa (Courtesy)
Advertisement
In her upcoming visit to Ethiopia, Justice Minister Ayelet Shaked will be visiting a local Falash Mura synagogue instead of an orthodox synagogue, indicating a breakthrough in overcoming delays in bringing the remaining Jews from Ethiopia to Israel.Following a disagreement with the Foreign Ministry, which suggested Shaked visit an Orthodox synagogue in lieu of a Falash Mura synagogue, pressure was exerted on Shaked and the Foreign Ministry and it was agreed she would visit the local Ethiopian synagogue. 'Falash Mura' is the Ethiopian name for members of the Beta Israel community in Ethiopia who forcibly converted to Christianity during the 19th and 20th centuries. The Falash Mura ar not covered by the Law of Return and are required to convert to Judaism once in Israel.In the past, Israeli ambassadors to Ethiopia and distinguished guests had not visited Falash Mura synagogues. A senior official of the local Ethiopian community told The Jerusalem Post's sister publication Maariv that Shaked's visit there is an important breakthrough.In recent months, Shaked had continuously expressed concerns about the government's delays and met with Sintayehu Shifaraw, the runner up of the International Bible Quiz and member of the Falash Mura community. Shifaraw was granted Israeli citizenship from the Ministry of Interior after an investigation by Maariv uncovered that he had to make a special deposit of bonds ensuring his return to Ethiopia, before being granted entry into Israel for the competition. The long-awaited meeting took place during the justice minister's travels to Tanzania and Kenya as part of Prime Minister Benjamin Netanyahu's delegation on a diplomatic mission in Africa. During her visit to the Falash Mura Tikvat Zion synagogue, Shaked will meet with Falash Mura community members and Shifaraw's family. Afterward she will have a dinner with Rabbi Menachem Waldman and other members of the community. 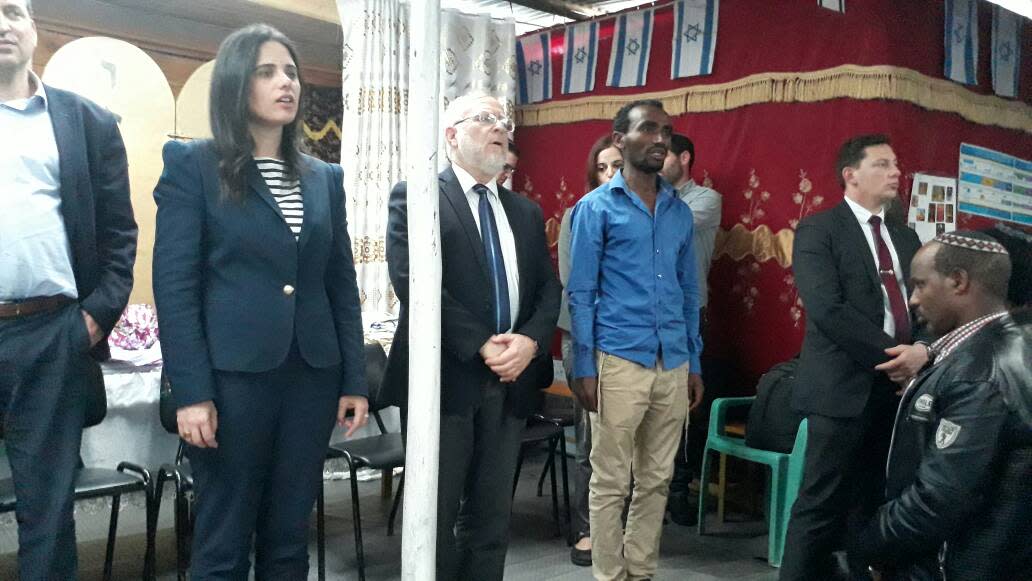 Justice Minister Ayelet Shaked sings the anthem during a meeting with Ethiopian Jews in Addis AbabaThe members of the community expressed that they intend to call on Shaked to confirm a date for a ministerial committee on the issue of Aliya from Ethiopia, as demanded by the prime minister on March 11th, 2018. In addition, they intend to call for the implementation of a new government decision that will enable the fulfill the promises of a 2015 decision which was agreed upon by the government to facilitate the Aliya of Ethiopian Jews."We welcome Shaked's decision to see with her own eyes the Ethiopian Jewish community, their longing for Judaism and Israel and their longing for their families in Israel. We have no doubt that Shaked will work with full force in order to implement the government's 2015 decision and uphold the law in Israel," the organization Struggle of Ethiopian Aliya said.