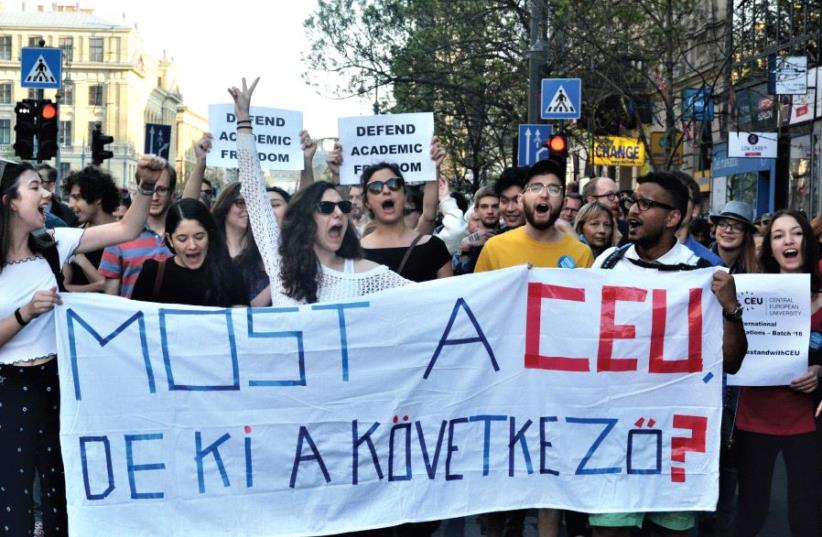 Students bear a banner that says ‘CEU now, but who’s next?’ during a protest against the Hungarian government’s plan to shut down a local university founded by George Soros
(photo credit: TIBOR KRAUSZ)
Advertisement
BRUSSELS - The European Commission opened a legal case against Hungary on Wednesday over a new higher education law that threatens to shut down a Budapest university founded by US financier and liberal philanthropist George Soros.Brussels, long exasperated by what it sees as Prime Minister Viktor Orban's authoritarian tendencies, believes the law, passed on April 4, undermines the principle of academic freedom and is incompatible with the European Union's democratic values.The law has triggered mass street protests in Hungary in support of the Central European University (CEU), but Orban says it is needed to prevent foreign universities from issuing dubious diplomas.The Commission, which upholds EU laws, said it had sent a letter of formal notice to Budapest as "a first step towards an infringement procedure," adding: "The Hungarian authorities will now have one month to respond to the legal concerns."The EU executive arm also said it would continue to discuss with Hungary its concerns over the country's stance on asylum rules and a draft law on non-governmental organizations.Orban, in power since 2010, has repeatedly clashed with NGOs sponsored by Soros, who promotes a liberal and internationalist worldview that the Hungarian leader dislikes.
George Soros (Photo credit: REUTERS)
EU lawmakers were set to debate the Hungarian situation in Brussels later on Wednesday and Orban was also due to take part.On Tuesday, CEU president Michael Ignatieff, the former head of Canada's Liberal Party, appealed to Brussels for help.The EU's scope to punish Hungary is limited, however, as this would require the unanimous backing of the 27 other member states. Orban can count on his nationalist-minded allies in the Polish government to oppose any harsh action.The Commission's 'infringement' procedures, which it can open when a member state violates EU laws, are a lengthy affair, but diplomats in Brussels hope Orban can be persuaded to seek a compromise."I think the Hungarian government will try to find a deal. The style of the discussion may not be very elegant but there will be some sort of a compromise in the end most likely," one diplomat said.The CEU has stood as a bulwark of liberal thinking in Hungary and across eastern Europe since it opened in 1991 after the fall of Soviet-backed communism in the region.Orban critics say the move against the CEU is part of a broader push to stifle dissenting voices and put independent institutions - including the judiciary, media and NGOs - under closer government control.