The European Jewish Congress (EJC) expressed shock and revulsion at the attacks, calling them “shots at the heart of Europe,” which must countered. 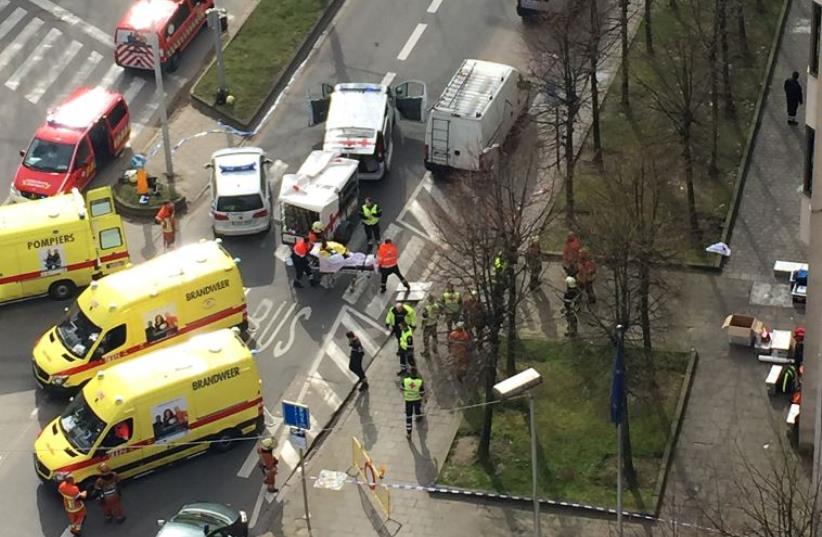 Rescue teams evacuate wounded people outside the Maalbeek metro station in Brussels on March 22, 2016 after a blast at this station located near the EU institutions
(photo credit: AFP PHOTO)
Advertisement
Jewish leaders and organizations in Europe denounced the Brussels attacks on Tuesday, describing the incidents as Islamist terrorist attacks and the work of “Islamic fascists,” and called for concerted action against terrorism infrastructure and supporters.Chief Rabbi of Brussels and the rabbi of the Belgian Central Jewish Consistory Avraham Gigi issued a message of solidarity with the victims and their families, and said the aim of the terrorists was to undermine Europe and that the EU should fight such groups with vigor.“Jews and non-Jews need to unite to fight against terror, against those who wants to destroy our democratic values, against those who want to undermine the foundations of Europe,” Gigi told The Jerusalem Post by phone.“We will all be in this fight together. We share in the suffering and loss of the families who lost their loved ones and we are with them,” he continued, calling the events a tragedy for Belgium.Gigi said that some of the planned Purim celebrations in Brussels would likely be muted in light of the attacks, and said a large concert with some 400 guests in the city’s Grand Synagogue, which he heads, would probably be canceled.Purim prayer services and the reading of the Book of Esther would go ahead as planned, under the protection of Belgian police and army personnel.Jewish schools and other institutions in Antwerp and Brussels went into lockdown following the attacks. Community leaders were discussing the possibility of canceling school on Wednesday.The European Jewish Congress (EJC) expressed shock and revulsion at the attacks, calling them “shots at the heart of Europe,” which must be countered.“This is yet another shocking, appalling and deadly attack on innocent Europeans by radical terrorists,” said Dr. Moshe Kantor, president of the EJC.“We can no longer ignore the fact that radical Islamists are at war with Europe and all Europeans and we call on our governments and law enforcement agencies to act accordingly. We have been exposed for too long and now we must strike back at the terrorist infrastructure, including those who support it economically and those who inspire and provide it legitimacy.”Moscow Chief Rabbi Pinchas Goldschmidt, also president of the Conference of European Rabbis, expressed solidarity with the families of the victims and the injured in Brussels and said that the Jewish community was praying for them.“This latest act of war of Islamic fascism against the capital of Europe and against all the values and liberties it represents is another chapter of the struggle between the forces of light and of darkness in our time,” said Goldschmidt.“A united Europe has to gather its strengths in unity and in determination to face and fight this evil on all fronts, in the media, on the borders, in the mosques and in the markets.”Rabbi Shmuel Pinson, head of the Synagogue Maale of Uccle-Forest in Brussels, said the city’s Jewish community was worried about its security, along with the rest of Belgium’s citizens, but is trying to continue as best as possible.“The whole city is paralyzed, which affects the Jewish community as well,” he told the Post. “The Jewish community is afraid, as is the rest of the population, although perhaps more because Jewish people have been the target of attacks in the past.”Pinson said that, as of Tuesday afternoon, his synagogue was still going ahead with planned Purim celebrations on Wednesday night, noting that police and army personnel would be guarding Jewish sites over the holiday.David Harris, the CEO of the American Jewish Committee, who was in Brussels for scheduled for meetings with EU officials, said that parts of the capital were in partial or complete lock-down, while heavily armed soldiers were visible in many parts of the city.“Brussels is a jihadist target,” he said. “We saw it in May 2014, when four people were killed at the Jewish Museum here. We saw it again with the city's lock-down in November. And again now. More generally, Europe faces an increasing threat of such terror, and, though it had been agonizingly slow to wake up to the magnitude of the challenge, the stark reality seems to be sinking in. Europe's way of life and core values are at stake. It must prevail in this struggle.”The Federation of Jewish Communities of Spain, the institution that officially represents Spanish Jewry, contacted The Jerusalem Post to express its profound sadness and concern for the victims of today’s terror attacks. "The FCJE condemns the terror attacks on the European capital and expresses its solidarity with the Belgian people, while wishing a speedy recovery to those who have been hurt." "Once again, we feel the need to urge the European authorities to react firmly to this terrible event, and not to give in to the blackmail of terrorism, and the threat that radical Islam presents for the entire world, in wishing to eliminate our ethical and democratic values,” said a spokeswoman for the federation.World Jewish Congress President Ronald S. Lauder condemned the attacks, urged further international cooperation in the fight against Islamist terrorism and said that jihadist ideology must be uprooted.“Our hearts go out to the many victims and their families,” he said.“Those who masterminded these attacks must be caught, their support network must be dismantled and their financial resources dried out.“What is more important is to cut the tree from its roots, to combat the Islamist and jihadist ideologies on all fronts, and to finally ensure that the senseless killing of people by fanatics is stopped wherever it takes place.”JTA and Marion Fischel contributed to this report.