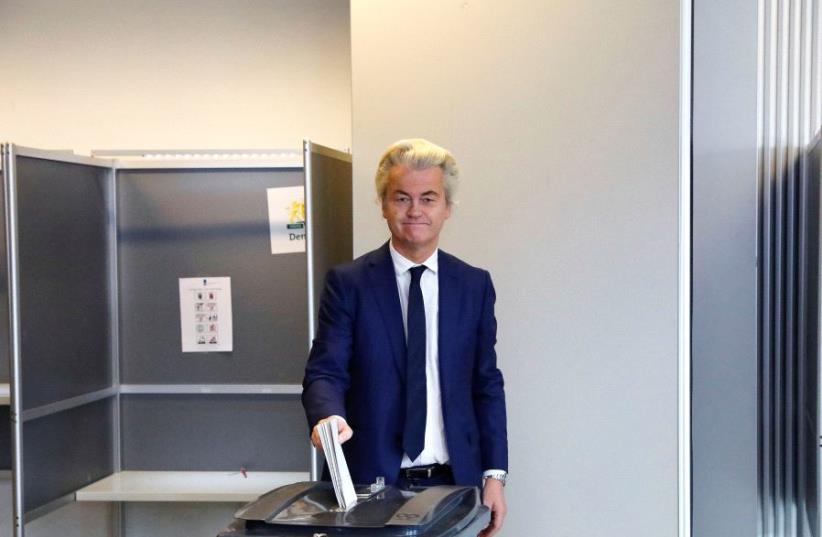 Dutch far-right politician Geert Wilders of the PVV party votes in the general election in The Hague, Netherlands, March 15, 2017.
(photo credit: REUTERS)
Advertisement
The European Jewish Congress on Thursday praised Dutch voters “for rejecting populism and extremism” after Prime Minister Mark Rutte’s center-right party beat the far-right party of Geert Wilders.“Prime Minister Rutte expressed before the elections that a populist ‘domino effect’ was taking place across the globe. However, we hope that this electoral victory will begin the reverse, a ‘domino effect’ of mainstream parties pushing back against extremism and populism,” EJC president Dr. Moshe Kantor said.“With the French and German elections taking place in the coming months, hopefully this result will be an encouraging sign to the mainstream parties in their election campaigns against populists and extremists.” he continued. “We look forward to joining together with the Prime Minister in the battle against racism, extremism and antisemitism.”
Dutch politician Geert Wilders compares Islam to Nazism in TV interview
The Conference of European Rabbis also hailed the results. Conference president Rabbi Pinchas Goldschmidt said: “Yesterday was a good day for Europe, the news from the Netherlands were encouraging. We will continue to pray for the future of the European Union, its ideals, liberties and values.”Wilders’s anti-European Union, anti-Islam Party for Freedom gained seats in Wednesday’s election, but was clearly beaten by Rutte’s People’s Party for Freedom and Democracy, and has no chance of entering a coalition government, as rival parties have shunned it.Reuters contributed to this report.