The Brussels conference focuses on the status of restitution in countries that endorsed the Terezin Declaration. 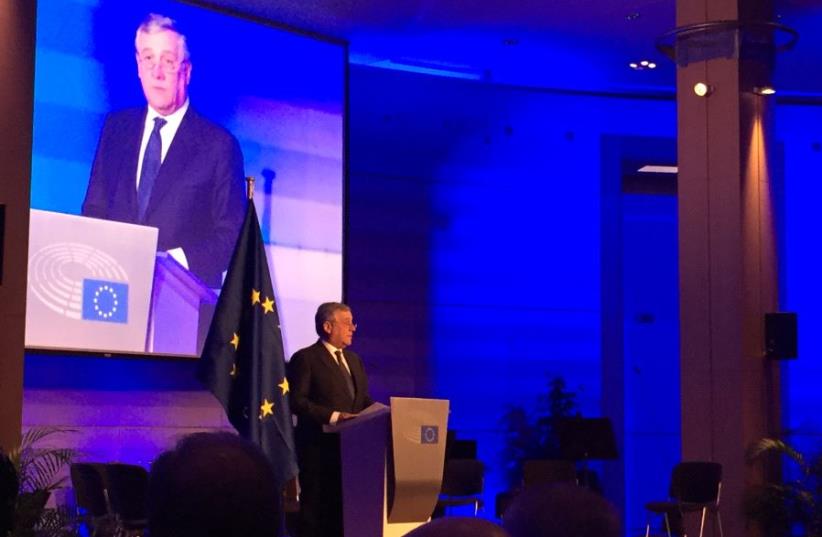 Antonio Tajani
(photo credit: TAMARA ZIEVE)
Advertisement
European Parliament President Antonio Tajani on Wednesday urged European countries to step up efforts to ensure the return of property and possessions seized from Jewish victims during the Holocaust.Speaking at the opening of an international conference in Brussels titled “Unfinished Justice: Restitution and Remembrance,” Tajani stressed the importance of restitution.Declaring that restitution across Europe was still challenged by legal and technical problems, leaving victims without their property, Tajani said: “Restitution, together with remembrance and reconciliation, is a fundamental element to restore justice after the Holocaust.
IDF Chief Cantor Shai Abramson sings "El Maleh Rahamim" at European Parliament"s International Holocaust Remembrance Day ceremony on Jan. 25, 2017 [credit: TAMARA ZIEVE]
“The European Parliament has called on the [European] Commission to develop common principles and guidelines,” he added, highlighting that the 2009 Terezin Declaration provides a clear reference point for restitution and a commitment for all European countries.Forty-seven countries, including all 28 members of the European Union, approved the Terezin Declaration, which recognizes “the importance of restituting or compensating Holocaust-related confiscations made during the Holocaust era between 1933-45.”According to the World Jewish Restitution Organization, only a small fraction of private and communal property illegitimately seized from Jewish victims during the Holocaust has been returned or compensated.WJRO also emphasized that, of the remaining 500,000 survivors alive today, up to half are estimated to live in poverty.“Progress has been made over the last years. Some countries have done a lot and have even developed best practices. Others should do more,” Tajani said.The European Shoah Legacy Institute – which commissioned a comprehensive study on the status of restitution in each of the countries that endorsed the Terezin Declaration – called out Poland as being the only country that has yet to enact legislation dealing with restitution or compensation of private property nationalized by the Polish postwar Communist regime.The conference was hosted by the European Parliament and organized by the European Alliance for Holocaust Survivors, a coalition of members of the European Parliament committed to issues impacting Holocaust survivors, the WJRO and ESLI, together with the European Jewish Congress and B’nai B’rith International. The permanent missions of the State of Israel, the Czech Republic, and the United Kingdom to the European Union and their respective foreign ministries were also partners in the conference.During the conference, members of the European Parliament called on the European Commission and all member states to each appoint special envoys for Holocaust-related issues, including restitution, to accelerate activities aimed at securing justice for victims.Gideon Taylor, chairman of operations for the World Jewish Restitution Organization, praised Tajani’s announcement as a “significant step toward helping Holocaust survivors achieve justice regarding confiscated property.“The support of the European Parliament sends a strong signal about the importance of fulfilling the pledges countries made under the Terezin Declaration,” he said. “Countries have a moral obligation to ensure that workable property restitution laws are put in place, and we hope that they will respond by reaffirming their commitment to providing justice for the remaining survivors, their families and Jewish communities as a matter of urgency.”Polish-born British Holocaust survivor Ben Helfgott also emphasized the importance of the issue, saying that “committing to a substantial, broad and coordinated program of restitution goes some way to recognizing the suffering, anguish and torment that occurred directly to those Jews present at the time, and the damage it caused for generations afterwards.”The conference was attended by members of the European Parliament, diplomats, leaders of international Jewish organizations and European Jewish communities as well as Holocaust survivors.