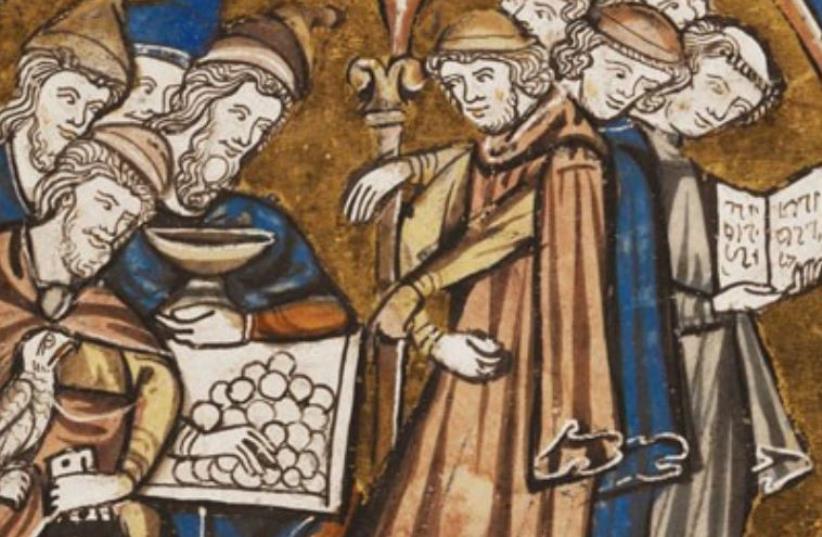 Ancient depiction of Jews as money lenders and financiers
(photo credit: Courtesy)
Advertisement
The European cities that were tolerant towards Jews during the Renaissance are reaping the financial benefits to this day, according to a groundbreaking study by a European academic.Professor Luigi Pascali, an economist who teaches at the University of Warwick and Pompeu Fabra University in Barcelona, authored a research paper in which he claims that the presence of Jewish moneylenders and financiers in European townships was instrumental in the development of banks and other lending institutions.Those areas from which Jews were expelled in the Medieval period continue to suffer the economic repercussions even in the present day, Pascali found.The report first appeared in the British newspaper Daily Mail.To buttress his argument, the professor cites cities in his native Italy. In the traditionally depressed southern part of Italy, Jews were expelled in 1503 by the Spanish crown, which had issued a decree requiring them to convert to Christianity.In the northern part of Italy, however, where city-states either operated independently or were ruled by the French, Jews were permitted to stay. The result was that banking and moneylending were allowed to flourish, and this served to benefit the entire population. The north of Italy has always performed better economically than the south – and the expulsion of the Jews was certainly a factor, according to Pascali.“I argue that cities, in which the local Jewish community in 1500 caused an early development of the banking sector, have more banks today and, because of this, are more developed today,” Pascali told the British newspaper Daily Mail."Local banking development has a large causal impact on economic development," he said. "In particular, using firm-level data, I show that a higher density of local banks increases aggregate productivity in the manufacturing sector, by reallocating resources towards the most productive firms.""This is the main channel through which local banks have an effect on economic development."