Germany is holding what are likely to be its last trials linked to the Holocaust, in which the Nazis killed more than six million people, mostly Jews. 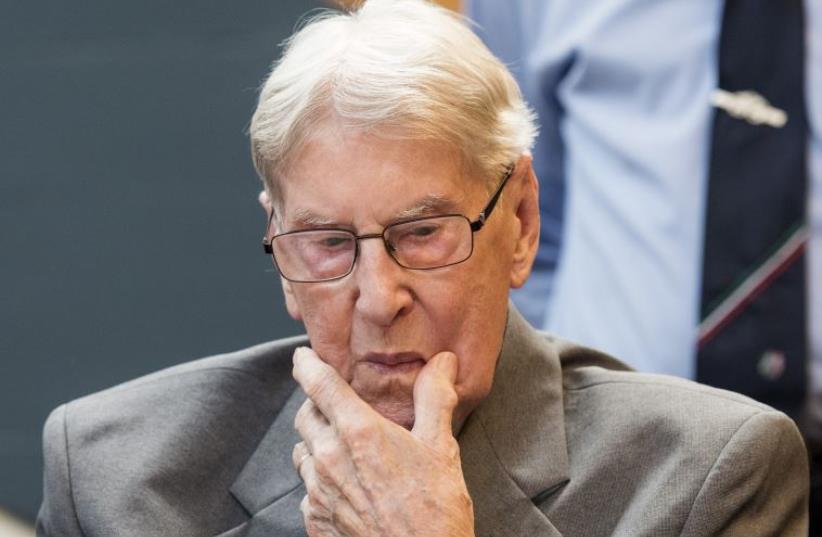 Ex-Auschwitz guard Reinhold Hanning
(photo credit: REUTERS)
Advertisement
A 94-year-old former Auschwitz guard was convicted on Friday of being an accessory to the murder of 170,000 people, according to the judge presiding over what could be one of Germany's last Holocaust trials.Reinhold Hanning was sentenced to five years in prison for his role in facilitating the slaughter at the Auschwitz death camp in Nazi-occupied Poland.The defense had called for the acquittal of the former SS officer, saying Hanning had personally never killed, beaten or abused anyone in his capacity as a guard at the camp.Judge Anke Grudda read out the verdict on Friday, the 20th day of proceedings in the four-month trial, with each day limited to just two hours due to Hanning's old age.The trial included testimony from at least 10 Holocaust survivors, some of them about Hanning's age, who detailed their horrific experiences, recalling piles of bodies and the smell of burnt flesh in the death camp.Hanning remained silent and emotionless throughout much of the trial, avoiding eye contact with anyone in the courtroom.He finally spoke up the end of April, apologizing to the victims and saying that he regretted being part of a "criminal organization" that had killed so many and caused so much suffering. "I'm ashamed that I knowingly let injustice happen and did nothing to oppose it," he read from a paper.Hanning was not charged with direct involvement in any killings. But the prosecutor's office in Dortmund and dozens of joint plaintiffs from Germany, Hungary, Israel, Canada, Britain and the United States accused him of helping Auschwitz to function.A precedent for such charges was set in 2011, when death camp guard Ivan Demjanjuk was convicted. Last year, Oskar Groening, known as the "bookkeeper of Auschwitz", was sentenced to four years in prison after he was convicted of being an accessory to the murder of 300,000 people at the death camp.Germany is holding what are likely to be its last trials linked to the Holocaust, in which the Nazis killed more than six million people, mostly Jews.In addition to Hanning, one other man and one woman in their 90s are accused of being accessories to the murder of hundreds of thousands of people at Auschwitz. A third man who was a member of the Nazi SS guard team at Auschwitz died at the age of 93 in April, days before his trial was due to start.