Ex-Canadian minister in Israel: Stand up against injustice everywhere 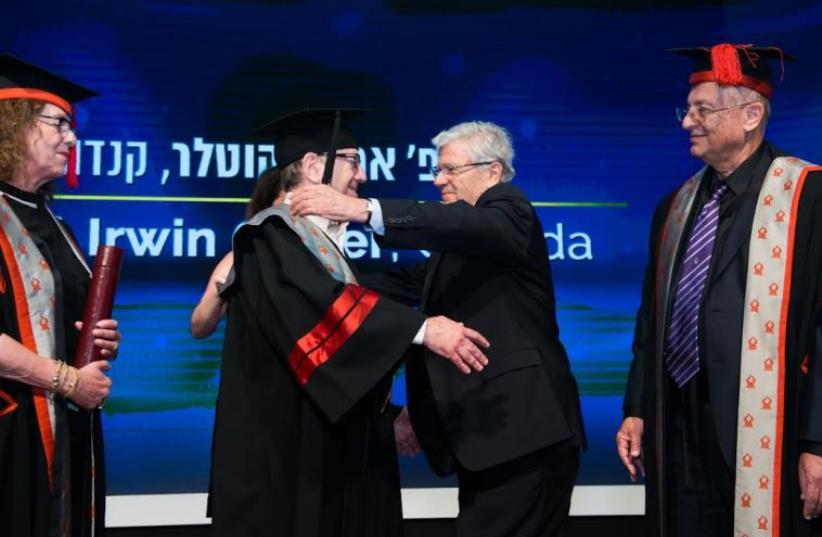 IRWIN COTLER receives his honorary doctorate from BGU president Rivka Carmi, rector Zvi HaCohen and former Supreme Court president Aharon Barak on Tuesday night.
(photo credit: DANI MACHLIS/BGU)
Advertisement
Canadian legal expert Prof. Irwin Cotler made a passionate plea in Beersheba on behalf of activists around the world “putting their lives on the line in the struggle for democracy and human rights and freedom.”Cotler, who has been nominated by Prof. Alan Dershowitz for this year’s Nobel Peace Prize, was one of six recipients of honorary doctoral degrees conferred by Ben-Gurion University of the Negev at a ceremony during the university’s 46th Board of Governors meeting Tuesday night.“A small group can change the world,” Cotler said in Hebrew, adding in English: “I think if I had a message, it’s not to remain indifferent. Stand up against injustice! Make sure that every day you do something to advance the cause of justice. I have hope that at the end of the day, the struggle for justice and human rights will be won.”Cotler, 76, an emeritus professor of law at McGill University who served as justice minister and attorney-general in Canada, was honored by BGU as “an illustrious legal scholar who has dedicated himself to upholding justice and protecting the rights of all people.”In a lecture in the Senate Hall preceding the ceremony, Cotler discussed his role in pushing for the release of political prisoners around the world, from Natan Sharansky in the former Soviet Union to Nelson Mandela in South Africa.Cotler opened his speech by quoting his father as urging him, in the Jewish tradition, to pursue justice, and his mother advising him to go out into the world and combat injustice, both within and outside the community.It was these teachings, Cotler said, that served as the basis of his involvement in two great human rights struggles in the second half of the 20th century: the one against apartheid in South Africa and the second for human rights in the Soviet Union, particularly the struggle for Soviet Jewry.He recalled how he had personally connected with efforts to liberate the two leaders who became “the voice, face, identity and vision” of these struggles – Mandela and Sharansky – both of whom he met after their release from jail.“Nelson Mandela endured 27 years in a South African prison and returned to preside not only over the dismantling of apartheid but to become the president of the first democratic, egalitarian, non-racial South Africa,” he said. “Anatoly Sharansky emerged to come on aliya to Israel, to become a member of Knesset and cabinet, [and] now the chair of the Jewish Agency.”In 1978, Cotler recalled, he developed an advocacy model of “shaming” to mobilize against human rights violators by exposing their violations of their own legal systems. He used the model in meetings with former Soviet leader Mikhail Gorbachev to urge him to free Sharansky, and with former South African foreign minister Pik Botha to push for Mandela’s release, and he continues to use it today.“Two weeks ago, the foreign minister of Canada, Stephane Dion, took with him to Saudi Arabia a legal brief from me regarding the release of Saudi blogger Raif Badawi, who I’m now representing.” Cotler said.“Again, this is a brief based on Saudi Arabian law, on Islamic law, not on its violations of Canadian or American law.”At the conclusion of his address, Cotler shared with the audience the principles of the “Never Again” Nuremberg declaration adopted at an international legal symposium at Jagiellonian University in Poland on May 4, on the eve of Holocaust Remembrance Day.Despite the “Never Again” slogan adopted after the Holocaust, he said, the world has witnessed genocides in Rwanda, Darfur and most recently in Syria.Together with the survivors of the Holocaust, Cotler said, “we must remember and pledge and undertake that ‘Never Again’ will not simply be an idle slogan, that never again will we ignore the plight of the vulnerable amongst us... that we will speak up and most importantly, that we will act against racism, against hate, against anti-Semitism, against injustice and against the crime of crimes whose name we should even shudder to mention: genocide. Let this be our commitment and our undertaking. Let this be our pursuit of justice.”In addition to Cotler, BGU President Rivka Carmi and Rector Zvi Hacohen presented honorary doctorates to Prof. Valerie Mizrahi, a distinguished South African scientist who had made the battle against tuberculosis her life’s work; Prof. Silvia Torres-Peimbart, an illustrious astronomer from Mexico, Prof.Jeffrey D. Ullman, a world-renowned computer scientist at Stanford University; Prof. Harvey V. Fineberg, president of the Gordon and Betty Moore Foundation and former provost of Harvard University; and Ernest Scheller Jr., a distinguished industrialist and philanthropist from Pennsylvania.