On the other side of the Atlantic, where Credit Mutuel has a branch office in New York City, the state’s legislature is negotiating a tough anti-BDS law. 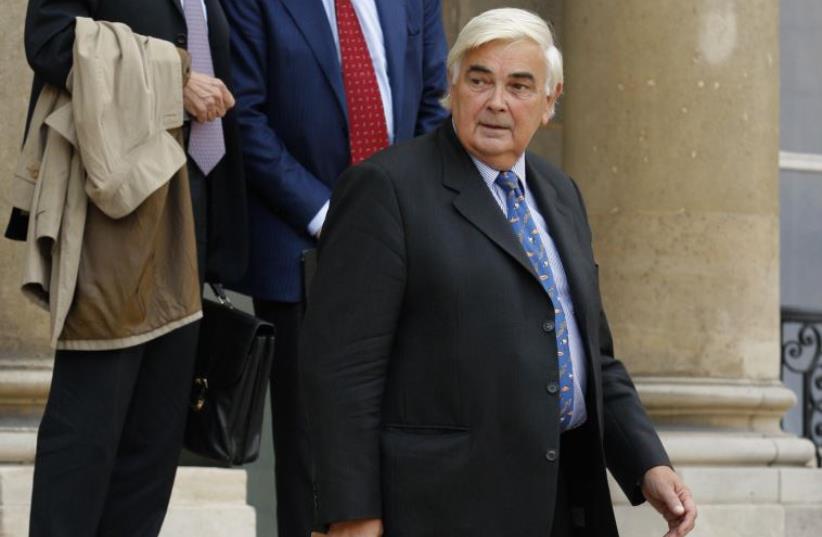 Credit Mutuel's Director General Michel Lucas, leave the Elysee Palace after a meeting with France's President Nicolas Sarkozy
(photo credit: BENOIT TESSIER /REUTERS)
Advertisement
NEW YORK CITY - The French embassy in Israel announced that an account held by Campaign BDS France with Credit Mutuel bank appears to violate the law."The French opposition against any form of boycott is well known. There are strict rules in France against calls for a boycott. These rules apply notably to all economic operators," the French embassy told The Jerusalem Post on Tuesday.France’s 2003 Lellouche law has been applied to punish Boycott, Divestment, Sanctions (BDS) activists for seeking to damage Israel’s economy. The Lellouche law outlaws discrimination based on national origin. The French embassy statement sends a fresh blow to Credit Mutuel and could open a floodgate of litigation against the financial institution. Multiple Post press queries to the French financial institution Credit Mutuel were not immediately returned on Tuesday.Frédéric Monot, a spokesman for Credit Mutuel, told the Post last week, “We do not disclose information covered by banking secrecy, but we strictly respect the application of French law.”Credit Mutuel is now in the cross hairs of a two-front legal war. On the other side of the Atlantic, where Credit Mutuel has a branch office in New York City, the state’s legislature is negotiating a tough anti-BDS law.“The New York legislation would certainly adversely affect those banks. In a time of crisis that is growing more acute by the day, Americans and New Yorkers want to stand with our strategic democratic ally. Israel and against hatred peddled by the BDS movement,” New York State democratic Assemblyman Charles Lavine told the Post in early April.Roger Cukierman, the head of the CRIF( Representative Council of French Jewish Institutions), told the Post on Wednesday that “a boycott [of Israel] is forbidden by law” in France, and said the BDS France account should be closed.Campaign BDS France did not respond to Post press queries.After the Post exposed its existence in February, the French bank BNP Paribas terminated the account of the main BDS group in Germany – BDS Campaign. BDS Campaign had an account with BNP Paribas’s subsidiary DAB Bank in Munich.According to sources in France, BNP Paribas shut the BDS Campaign account because it was in violation of the Lellouche law.Last month, a French appeals court invoked the Lellouche Law to convict activists who called for a boycott of Israel.France’s Cassation Court upheld the conviction of seven activists for discrimination and meted out a $1,000 fine to each anti-Israel protestor.The BDS activists urged a boycott of Israeli goods at a supermarket.