This Halloween, two party-goers took dressing up a little too far. 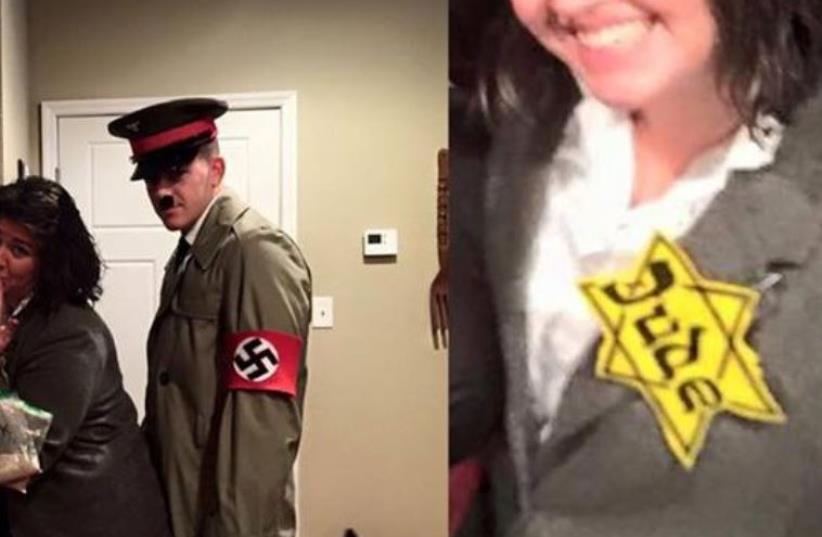 Holocaust-themed Halloween costume
(photo credit: FACEBOOK)
Advertisement
People push the limits every year with costumes appropriating different cultures in order to be edgy, and sometimes they wind up crossing the line.  This year, a particularly offensive costume involved a man dressed as an SS officer and a woman dressed as Anne Frank, carrying a bag of powder labeled “Mama Frank.” Facebook had the original pictures taken down, after push-back from several users.
This wasn’t the only Holocaust-themed costume around this season.  Earlier this week at a Goodwill store in Berkeley CA, there was a Holocaust prisoner uniform replica for sale.  When the employees were notified of this inappropriate garment, it was quickly pulled from the racks. Stand With Us, a pro-Israel organization primarily active on social media platforms including Facebook and Twitter, condemned the offensive costume. “Yes - this is actually a Halloween costume that someone wore this year, and posted about it on Facebook. It is absolutely shocking that we need to say this, but the murder of six million Jews by the Nazi regime is not a Halloween costume. It is appalling and disgusting that this young woman and man thought it appropriate to dress up as such for Halloween - and even more appalling that they posted it on Facebook. These photos explain to the world just why Holocaust education is so important. We must continue to educate others about the Holocaust.”
Emily Schrader, the Social Media Director of Stand With Us, told The Jerusalem Post: “I saw it on a friend of a friend’s Facebook.  The original photos were taken down from Facebook, but my friend shared it and I think it’s important to talk about the fact that it’s not cute or funny. It’s inappropriate and just not acceptable. Disrespectful costumes like this demonstrate the need to continue to educate future generations about the severity of the Holocaust. ”In the comment section of the Stand With Us post, different spectators weighed in.  Joe Sheedy made a case for dark humor, saying, “I don't know, I genuinely give people a large berth on Halloween and I'm very much no holds barred on humor. I think at times you miss the mark entirely and it's just offensive like this as it's not really of any quality."Personally I don't mind humor on any subject. I think Joan Rivers said a great thing when she made the first 9/11 joke in stand up. She described how it caused this gasp of relief from the crowd as they realized it was OK to laugh and cry together in the face of tragedy," he continued. "Obviously this isn't that it's just a rather childish costume that I expect they'll get some blow-back from. But I don't ever want people to stop being tasteless in a way because it reminds us all that's it's OK to laugh in the face of even the worst events. So yes I totally see why people are offended, I mean I am, it's just cheap and humorless. I'd just say comedy shouldn't have limits and despite this completely failing at comedy I wouldn't want us to be limited in terms of what can be offensive.” Patrick Moore looked at the matter from a more serious perspective:  “This is appalling and very disturbing to me. Over 6 million innocent Jews lost their lives. Words cannot say how angry I feel when I see this kind of heartless form of disrespect. I feel that could have been my family and the Jews are my brothers and sisters. Regardless if I am an American Catholic Christian. The Holocaust was the murdering of God's beloved people.”Brett Brown gives us a reality check while bringing light to the situation.  “Just a reminder: Halloween is suppose to be about things that scare us, and isn't the repeat of an event like this or the people like this scary? I think these two are on point.”