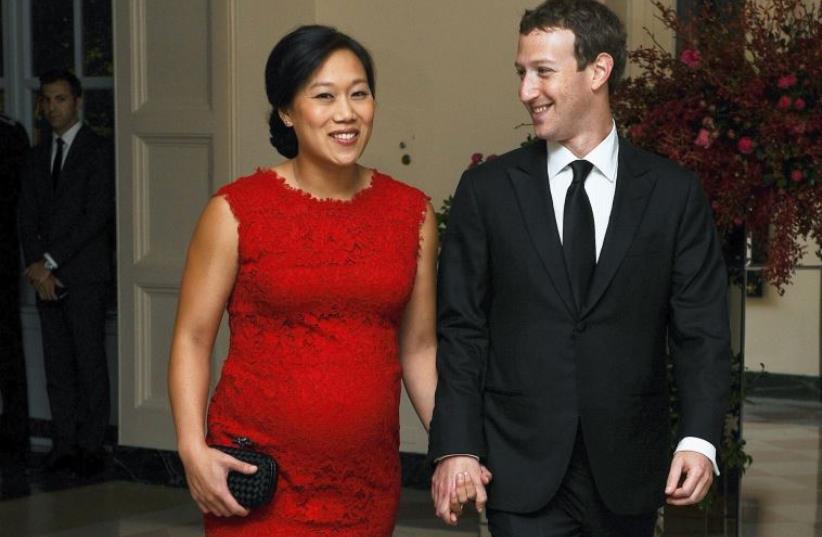 Mark Zuckerberg and his wife Priscilla Chan, September 25, 2015
(photo credit: REUTERS)
Advertisement
SAN FRANCISCO - Facebook Inc Chief Executive Officer Mark Zuckerberg said on Friday he will take two months of paternity leave after his daughter's birth, a strong statement from one of the busiest and most powerful US executives on the importance of family time.Silicon Valley technology firms have rushed to extend parental leave allowances and other benefits in an attempt to recruit and retain talent, but many workers do not take advantage for fear of falling behind at work or missing out on promotions.Facebook, the world's biggest online social network, allows its US employees to take up to four months of paid maternity or paternity leave, which can be used all at once or throughout the first year of their child's life, a policy which is generous by US standards. The Jewish Facebook CEO announced in July that he and his wife, Priscilla Chan, were expecting a baby girl.A 2015 study by the Society for Human Resource Management found that 21 percent of employers it surveyed offered paid maternity leave, and 17 percent provided paid paternity leave."This is a very personal decision," Zuckerberg wrote on his Facebook page, along with a picture of a stroller, a yellow baby carrier and his dog, Beast. "Studies show that when working parents take time to be with their newborns, outcomes are better for the children and families."Zuckerberg, 31, did not say who would be running the company while he is out. Facebook did not immediately respond to an inquiry.It is likely that chief operating officer Sheryl Sandberg, who oversees all of Facebook's advertising, will assume leadership. Zuckerberg largely oversees products, but will likely rely on chief product officer Chris Cox while he is out.Zuckerberg's decision is unusual among high-level tech executives, especially men. Yahoo Inc CEO Marissa Mayer took two weeks off after her first child's birth in 2012, and when she announced she was pregnant with identical twin girls in September, she said she would be taking limited maternity leave and "working throughout."Zuckerberg's post generated more than 50,000 'likes' in one hour and nearly 3,000 comments. Many of the comments lauded his decision and said it sent a positive message about U.S. parental leave policies.Sandberg commented and congratulated Zuckerberg and his wife. Noting the baby's upcoming birth, she wrote in her post: "I can't wait to meet her."