“I was lucky that not having Asian or multiracial rabbis never made me think it was something that I couldn’t do.” 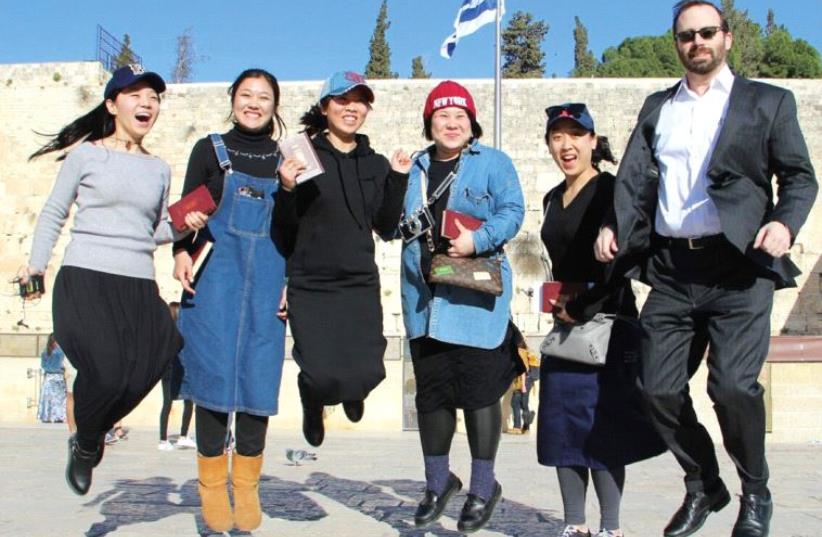 The author jumping in the air in joy at the Western Wall with Jews from China
(photo credit: LAURA BEN-DAVID)
Advertisement
Rabbi Jacqueline Mates-Muchin, originally from San Francisco, is known as the first ever rabbi to share the double culture: Jewish and Chinese.
Growing up between the two traditions, studying in both Hebrew and Chinese schools as a child with her siblings, she said in an interview for LUNAR: The Jewish-Asian Film Project. that for her, “I didn’t feel like there was a push or pull [of identities].”
“I think my parents had a really good approach to it, that we were very lucky to be a part of two peoples, and two long-standing traditions. [They] were sure to tell us that nothing held us back, and we could work to do whatever we wanted to do in the world.
“I was lucky that not having Asian or multiracial rabbis never made me think it was something that I couldn’t do,” she added.
During an interview with the Global Jews website, she was asked on the impact her title of first Chinese-American rabbi could have on the next generations, to what she answered that “It’s a humbling thing to know that, for some people, their understanding of what’s possible changes based on who their leadership is.”
She also recalled her childhood and time at university, saying that it was hard for people to believe she was Jewish. She even remembered that in college, Hillel leadership assumed she was active only because her boyfriend at the time was Jewish.
However, she insisted on the fact that she always knew that people's’ doubts about her identity weren’t about her, specifically, but about internalized biases they held.
“My parents told us very young that people would say those kinds of things,” she said, that "it would hurt sometimes, of course, but we recognized that they were the ones who were saying something problematic.
“At the heart of it, we, as Jews, are a people, and we are about belonging and feeling grounded in a people and a tradition that extends as far back as we can remember and into the future as far as we can imagine,” she said in the interview. “Some of my experiences growing up taught me the significance of belonging. Being very close to my family, I have a very innate sense of what that belonging is, and when you don’t feel like that.”
For Mates-Muchin, it is important to share the stories of Jews who are living with different cultures, like her. Even though she herself has not always felt welcome in the Jewish community, she also thinks it’s important to highlight experiences that are not just about pain and exclusion, the Global Jews website reported.
“We need to enable the people whose experiences we’re talking about to be the ones who identify when and where and how those things are discussed,” she said. “If the majority of American Jews are able to let go of assumptions and be open to hearing what peoples’ experiences, feelings and traditions actually are, that’s ultimately how community can be created in the most meaningful way.”