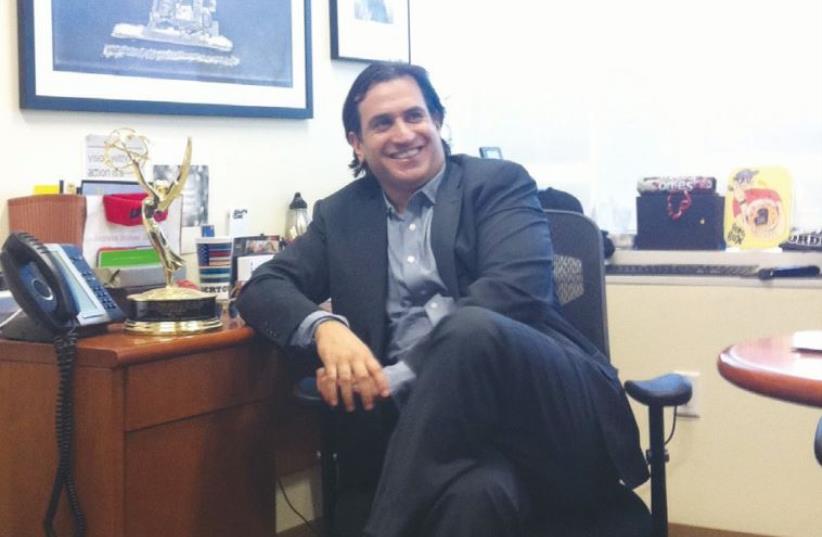 BENTO BOX Animation CEO Scott Greenberg relaxes at his Burbank, California, office
(photo credit: LAURA KELLY)
Advertisement
LOS ANGELES – An Emmy sits atop a desk cluttered with files, folders and paraphernalia representing Bento Box, the Los Angeles production company behind the US television channel FOX’s Bob’s Burgers, and The Awesomes, an original for the Internet streaming site Hulu.Bento Box CEO Scott Greenberg calls his father Steve, the chairman of the conference of presidents of Major Jewish Organizations, and puts him on speaker phone. “Dad, who was it that you gave Ronald Reagan the Prisoner of Zion bracelet, was it Begun? It was Begun.”Back in 1981, Steve met the president and presented him with a bracelet bearing the name of Prisoner of Zion Yosef Begun. A photo of this meeting is part of a traveling exhibit created by Limmud FSU, the Jewish festival of learning, culture and creativity.Scott Greenberg, a New Jersey native and LA transplant, will be speaking at the first-ever Limmud FSU West Coast conference, which takes places this January 29-31 at the Westin Hotel in Pasadena.His session will be “The Bento Box Entertainment Story: How we built the award-winning animation studio into a global digital entertainment phenomenon.”“I had the opportunity at a young age to see my father and his friends – these great men – doing things for the greater Jewish community,” Greenberg says in an interview in his office in Burbank. “When I was younger I didn’t know any different. You had Jewish people in need and they helped – that’s just what we did.”Greenberg began his career in Hollywood working on the iconic animated series The Simpsons and King of the Hill. He founded Bento Box in 2009 with Joel Kuwahara and Mark McJimsey.He says that he feels blessed to live in America and being invited as a speaker for Limmud FSU reinforced all the things he is thankful for. “I had the opportunity to go to college and law school, get up and move 4,000 miles away from my family, start a business because I don’t have to worry about being persecuted.“I don’t have to worry about my family not eating, or my family being questioned, lets say, because we make cartoons who push the envelope of free speech.I don’t think about it... It makes me reflect on how lucky I am to do what I do. And Limmud represents part of the reason why I’m lucky to do that.”Limmud FSU West Coast will feature an array of prominent speakers, including Oscar-winning actor Jon Voight and hip-hop mogul Russell Simmons.Other major participants in the conference will include Jewish Agency chairman and Soviet Jewry hero Natan Sharansky; Israeli film star Tamara Klingon; LA City Councilor Zev Yaraslovsky; Limmud FSU chairman Matthew Bronfman; honorary co-chairs of Limmud FSU Michal Grayevsky, Diane Wohl, Ada Horwich; Russian rock star Andrey Makarevich; Russian satirist and author Victor Shenderovich; Russian-Israeli singer Irene Talia Rosenfeld; jazz musician Leonid Ptashka; Jewish Women’s Renaissance Founder Lori Palatnik; former IDF Maj.- Gen. Uzi Dayan; Reut Institute President Gidi Grinstein; Rabbi David Wolpe; and Hillel International President and CEO Eric Fingerhut.“Limmud FSU has revolutionized how we strengthen the Russian-speaking Jewish community worldwide, and Limmud FSU West Coast offers an historic opportunity to engage and inspire this emerging community for generations to come,” said Limmud FSU founder Chaim Chesler. “We are thrilled to be bringing the premier Limmud FSU experience to the West Coast, with its fascinating Jewish history and growing Russian-speaking population,” said Limmud FSU co-founder Sandra Cahn.