499 pieces were determined to have a questionable history. 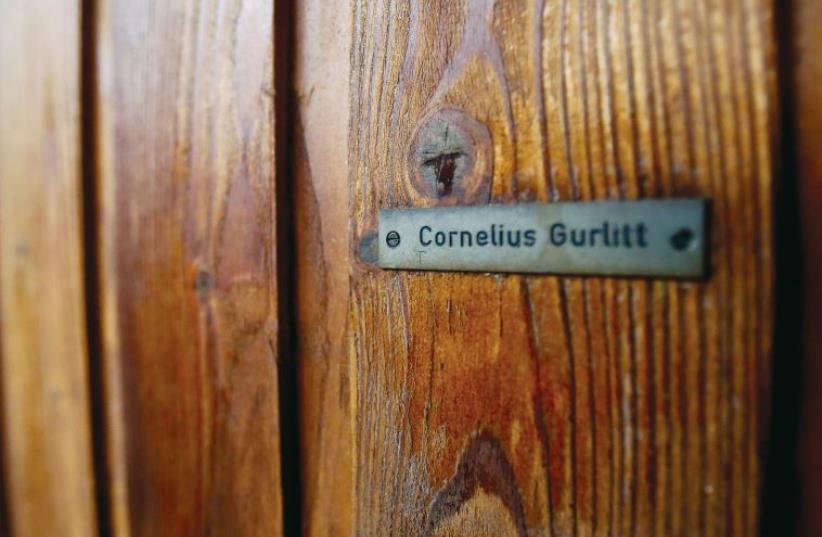 The nameplate on the house of art collector Cornelius Gurlitt is pictured in Salzburg in 2013
(photo credit: DOMINIC EBENBICHLER/REUTERS)
Advertisement
BERLIN - A task force set up by the German government to determine the ownership history of more than 1,500 art works discovered in 2012 has found that only five were wrongfully taken from Jews, drawing criticism from Jewish groups.German tax inspectors discovered the art collection, which included works by Matisse and Picasso, during a raid on the Munich home of Cornelius Gurlitt. His father, an art dealer, had sold what Hitler dismissed as "degenerate" art.After two years of research, the head of the task force, Ingeborg Berggreen-Merkel, presented the final report on Thursday.She said that only five pieces had been confirmed as stolen Nazi art, although 499 were determined to have a questionable history. Of the five, four were returned to heirs of their owners, including Max Liebermann's "Two Riders on a Beach" and Henri Matisse's "Seated Woman".The announcement drew sharp criticism from Ronald Lauder, president of the World Jewish Congress. He issued a statement on Thursday calling the results "meager and not satisfactory".Lauder said he "expected Germany to do better, given that time is running out", and accused the task force of poor management of its work.Jewish groups have been pressing the German government to move quickly, since many of the heirs of the Nazi victims are advanced in age.Accused of carrying out her work without sufficient transparency, Berggreen-Merkel said a dispute over the validity of the will of Gurlitt, who died in May 2014 at the age of 81, had made it difficult for the task force to be more forthcoming.In the will, Gurlitt designated the Bern Art Museum in Switzerland as sole heir to his collection. A cousin is challenging that claim, arguing that Gurlitt wasn't in good psychological health when he wrote his will. A court decision on the validity of the will is due in February.Culture Minister Monika Gruetters has announced Germany is setting up a Lost Art Foundation in the eastern city of Magdeburg, which will continue research into Gurlitt's artwork.