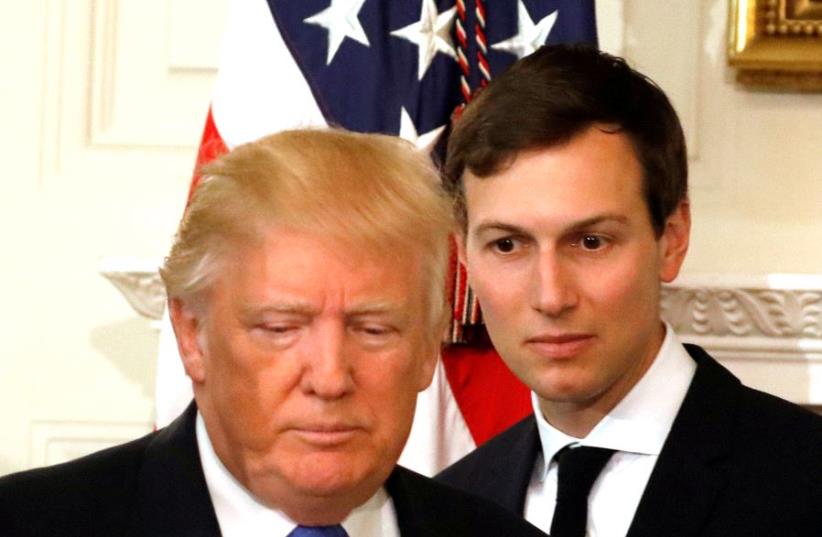 Donald Trump and Jared Kushner
(photo credit: REUTERS)
Advertisement
"The white majority are fed up with all of these lying, cheating, thieving, war-mongering, child-molesting political pimps and whores of this corrupt and decadent two-party, Jew-party, queer-party system!" cried Arthur Jones at a neo-Nazi rally in rural Kentucky, The Guardian reported.Jones delivered his fire-and-brimstone speech to a tent of like-minded individuals who applauded and "Mmmhmmm!"ed along with him. He decried United States President Donald Trump's campaign promises of a ban on Muslims and a wall along the US-Mexican border to keep out undocumented migrants, an issue on which the gathering felt the president has not delivered."President Trump," Jones continued, "has surrounded himself with hoards of Jews, including a Jew in his own family.  That punk named Jared Kushner. What does he know about foreign affairs? Nothing. And yet, he is going to determine what our foreign policy is in the Middle East? Absolutely absurd."[Notice: This video contains strong language.]"We're sending our troops over to the Middle East. To fight in Afghanistan, to fight in Iran, to fight in Iraq, to fight in Pakistan, to fight in Yemen... why?! One reason why: Israel. The Jewish lobby has Donald Trump locked up. I don't think the man realizes how naive he appears to the rest of the world. He's nothing but a puppet in their hands. And we were foolish enough to send this naive, Jew-loving fool into the White House. I'm embarrassed that I voted for him. I'm sorry I voted for him. If I could take the vote back, I would in a minute."In a wild election year in which Trump has been simultaneously labeled by many on the Left as deeply antisemitic and by many on the Right as in cahoots with a global Jewish conspiracy, Jones insisted, "The man has betrayed us!" and concluded his tirade with a shout of "White power!" to which several audience-members responded with a Nazi salute.According to the Anti-Defemation League, Jones has been involved in antisemitic and racist activities since the 1970s, including celebrations of Adolf Hitler's birthday. The ADL also noted in their profile of Jones that he is a Holocaust denier who protested the 2009 opening of the Illinois Holocaust Museum in Skokie, IL.The gathering took place in Pikeville, KY, a small town that was concerned about a potential violent conflict between the neo-Nazi groups and anti-fascist protestors who might confront them. In the wake of violent altercations at protests in Berkley and Seattle, James Anderson, an anarchist website editor, told The Guardian that the locals had expressed their anxiety."The organizers in Pikeville have been very clear they don't want people coming to the small town and smashing up the one McDonald's."One shop owner said that the Nazi rally was "setting back Pikeville 100 years."As for the "antifas," or anti-fascist groups bent on opposing the rally, their organizer told The Guardian that they took into consideration that their confrontation would only draw further media attention to the cause of white supremacy. "There is no denying they relish the attention... We also have to weigh the risks of not confronting them. We believe that, in the longer term, allowing neo-Nazis to organize openly and treating them like any other group gives them more legitimacy... History teaches us that ignoring Nazis will not make them go away and creates the risk they will begin to build real power."