France goes to polls under cloud of latest terror attack

The polls open on Sunday at 8 a.m., and will close 12 hours later. If, as seems certain, no one receives 50% of the ballots, the top two contenders will face off two weeks later. 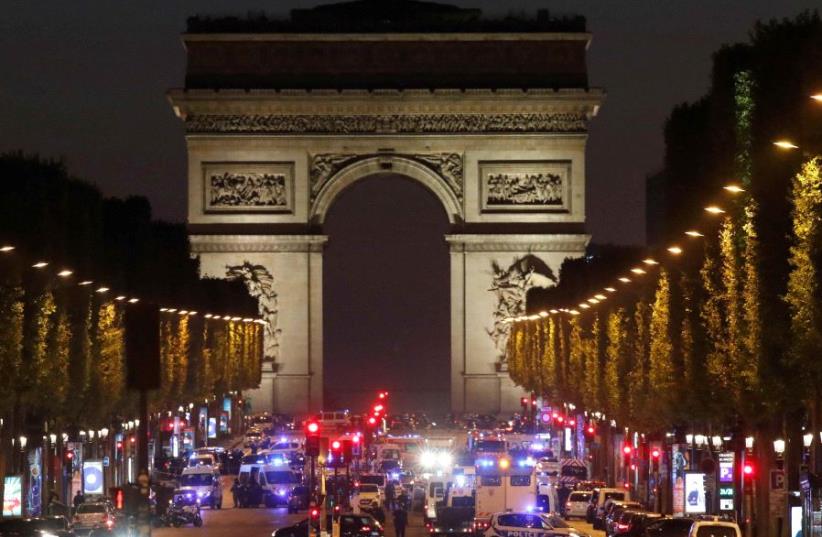 Police secure the Champs Elysees Avenue after a shooting incident in Paris, France
(photo credit: REUTERS)
Advertisement
PARIS –  Voting in France's presidential election will kick off Sunday morning under the tragic auspices of yet another terror attack that hit Paris earlier in the week, heightening concerns centered on security issues in an already tight race with no clear front-runner.  The polls will open on Sunday at 8 a.m., and will close 12 hours later. If, as seems certain, no one receives 50% of the ballots, the top two contenders will face off two weeks later.Surveys indicate that 23% of voters plan to vote for centrist Emmanuel Macron, 22% support far-right Marine Le Pen, 20% support center-right François Fillon and 19% are for far-left Jean-Luc Melanchon. Supporters of Benoit Hamon, candidate of the ruling center-left Socialist Party, have lost nearly all hope of seeing their candidate make it to the May 7 runoff.The campaign has focused on the economic crisis and high unemployment rate at the heart of the public agenda (the very same issues that made President François Hollande so unpopular), along with immigration. But anxieties about France's security situation were only exacerbated following a shooting on Thursday night on the Champs-Elysees shopping boulevard in central Paris, in which one policeman was killed and two others were wounded.It is currently unclear how the event will affect the French election, but candidates have been jockeying for an advantage in the contest by emphasizing their security credentials throughout the campaign period.
France Shooting CHAMPS ELYSEES AVENUE (Courtesy Thomson Reuters)
Some of the candidates later clashed over whether official campaigning should be brought to a full stop in light of the incident."In this current context, there are no grounds to continue campaigning. We must first show our solidarity with the police," conservative candidate Francois Fillon told the France 2 show a day after the Paris attack. Fillon, who has sought to reinforce his credentials as a hard-liner on security, added that fighting "Islamist totalitarianism" must be the priority for the next president.Far-left politician Jean-Luc Melenchon said the candidates should not cave in to violence."As we wait for more definite information, I think we need to attend to our duties as citizens: no panic, we shouldn't interrupt our democratic process," Melenchon said.Pollsters see centrist Emmanuel Macron and far-right leader Marine Le Pen taking the top two places on Sunday and so going head-to-head in the run-off. That would break the normal rotation of power in France between the center-left and center-right.Macron, a former banker who quit as economy minister last August to set up his independent "En Marche!" ("Onwards!") movement, would beat Le Pen or any other candidate in the run-off, the latest polls show.But these are so close that gaps between candidates in the first round fall within the margin of error.Melenchon, propelled from wildcard to genuine contender thanks to feisty television performances and a smart social media campaign, is virtually neck-and-neck with Fillon and only a few percentage points behind the frontrunners.CLOSELY WATCHED OUTCOMESecurity fears had already re-emerged in the run-up to a first ballot after an attack thought to have been targeted at some of the candidates was foiled earlier in the week. France has been hit by a series of deadly attacks since 2015.Le Pen, who has stressed her plans to curb immigration in the last week as she tries to rally support, on Thursday night also seized on the latest incident."I don't want us to get used to Islamist terrorism," she told France 2. "We have to stop being naive. We can't leave our children a country that is not able to defend them."Earlier in the evening, Macron also weighed in on the shooting, saying the president's No.1 job was to protect people.The election will decide the direction of France's 2.2 trillion euro economy, which vies with Britain for the rank of fifth largest in the world. With eurospectics Le Pen and Melenchon in the race, the outcome could have a bearing on France's place in Europe.A Harris Interactive poll on Thursday showed Macron and Le Pen still in front, with the gap a bit wider than before. The centrist inched ahead to 24.5 percent while Le Pen was a bit weaker at 21 percent.Fillon - an early favorite before his campaign hit the rocks following nepotism allegations that he has denied - scored 20 percent, meaning he was now gaining on Le Pen. Melenchon was stable on 19 percent.