French court orders suspect in 1980 synagogue bombing back to jail

French authorities allege that Diab was a member of the Popular Front for the Liberation of Palestine and took part in the synagogue bombing. 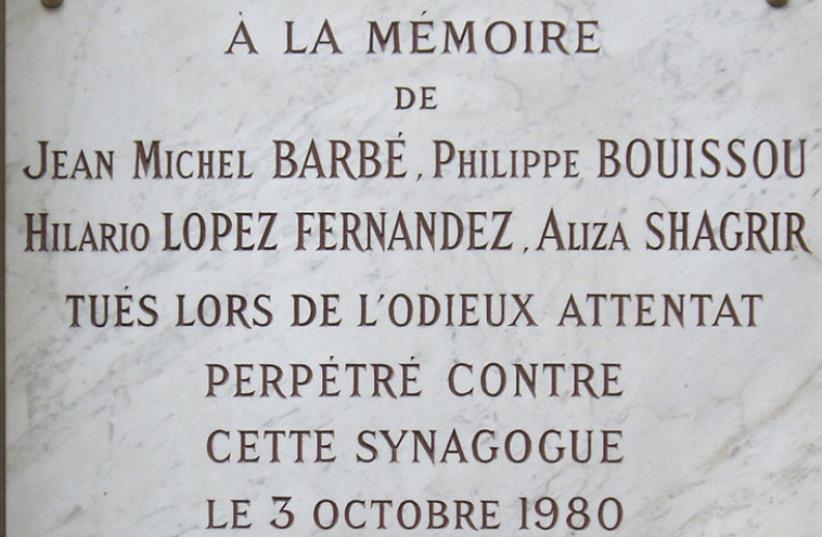 A memorial plaque at Rue Copernic Synagogue for the four people killed there on Oct. 3, 1980
(photo credit: Wikimedia Commons)
Advertisement
A French court of appeals ordered the re-incarceration of a terror suspect who had been released to house arrest while standing trial for the killing of four Jews in 1980.The Paris Court of Appeals on Tuesday upheld the prosecutors’ appeal against the May 12 release of Hassan Diab, a Lebanon-born university lecturer in Canada who was extradited to France to stand trial for a synagogue bombing in Paris, Le Monde  reported on Wednesday.French authorities allege that Diab was a member of the Popular Front for the Liberation of Palestine and took part in the synagogue bombing.The ruling overturns a lower court’s decision finding “doubt on the fundamental question” of whether Hassan Diab was in France when a bomb went off on Oct. 3, 1980 outside the ULIF synagogue on Copernic Street, AFP reported.Diab had fought his extradition from Canada for six years and is maintaining his innocence. His ex-wife, Nawal Copty, testified that she was with him in Beirut on Sept. 28, 1980 – a date on which the prosecution already places him in Europe, Le Monde reported.CRIF, the umbrella group of French Jewish communities, protested the decision to release Diab to house arrest in a statement released the following week, saying it was outraged.Diab’s arrest and extradition in 2014 “were a symbol of the judiciary’s determination to fight terrorism,” CRIF President Roger Cukierman said in the statement. “This release is scandalous and irresponsible. It is an insult to the victims and their families and will be interpreted as frailty in the face of terrorism, which hit France hard only recently.”Prior to his release, Diab was held in Fleury-Mérogis Prison, a high security correctional center in southern Paris.