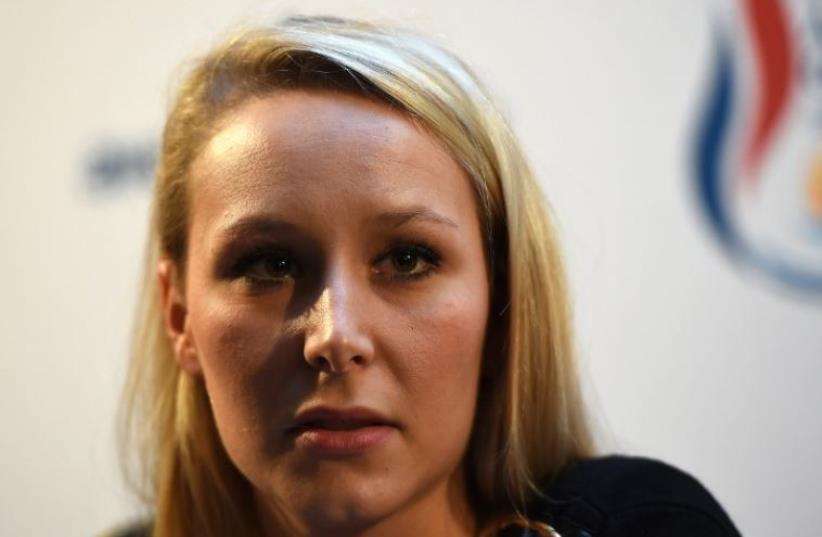 Vice-President of the French far-right Front National (FN) party and candidate for the regional elections in the Provence-Alpes-Cote d'Azur (PACA) region, Marion Marechal Le Pen, answers journalists' questions during a press conference
(photo credit: AFP PHOTO)
Advertisement
PARIS – On Friday, just two days before the first round of the regional elections in France, the Alsace chapter of the French Jewish umbrella organization CRIF, published a statement: "The Alsace chapter, strongly attached to the values of the Republic, calls upon all voters to participate at the upcoming elections – since so much is at stake. We are calling to reject the extremist parties that advocate hatred and try to prosper at the expense of the divide within the society created by fear." The significance of these words was crystal clear to any French voter. The Jewish community is calling upon its members and other French citizens not to support the extreme right parties and to work against sentiments of Islamophobia that have been gaining ground in the country ever since the November 13 attacks.For those who were still not convinced, CRIF president Roger Cukierman published an unequivocal statement Monday morning in which he called on the Jewish community to take part in the second voting round "in order to block the National Front, a party of xenophobia and populism." Indeed, the results of the first round yesterday shocked many.The leaders of the political parties, including Marine Le Pen, leader of the National Front, suspended for about a week their election campaigns after the Paris attacks. Nevertheless, or maybe because of that, the participation rate in this round of voting was exceptionally high for regional elections – more than 50 percent.Boosted by fears over the Islamic State attacks that killed 130 people in Paris on November 13, Marine Le Pen’s National Front party secured 27.7 percent of the vote nationally.It came first in six of 13 regions in Sunday’s vote, its best showing ever. The anti-Europe, anti-immigration party has been gaining ground for years among voters frustrated by the government’s failure to tackle unemployment, fearful of immigration and disillusioned by mainstream politics.Riding a wave of euroscepticism and anti-immigrant feeling which has brought far-right parties to prominence across Europe, the breakthrough bolsters Le Pen’s position as a serious contender for the 2017 presidential election.Some 16 percent of those who voted for the FN said they had changed their voting intentions after the November 13 attacks, an exit poll published on Monday said.Sixty-eight percent said their aim had been to punish the unpopular Socialist government of President Francois Hollande, the poll by Ifop and Fiducial for iTELE, Paris Match and Sud Radio said.The outcome also exposed fault lines within both the country’s main traditional political groupings over the right tactics to confront the National Front in the decisive second round of the regional elections next Sunday.To try to make sure Le Pen does not win in the final round, France’s ruling Socialist Party decided to tell its supporters in three regions where it came third to back Nicolas Sarkozy’s conservative Republicans.Party seniors admitted that they themselves never expected such results.Dr. Simon Samuels, international relations director of the Wiesenthal Center in Paris, feels that French society has undergone deep changes over the past few years. "If elections had taken place before the November attacks, we could have perhaps argued that the dire economic situation pushed people to the margins. But following the attacks, it is clear that we are talking about something else. This is not a protest. People have just had enough. They are tired of insecurity and they are looking for other political routes and solutions." Samuels regrets the small minority of French Jews who have been voting in past elections, and probably also this time around, for the National Front party. "A few months ago members of the European Jewish parliament discussed the possibility of meeting with Marine Le Pen. I voted against it, but the majority agreed, and so a group of Jewish leaders met with her last summer. She made very positive declarations in this closed meeting with them about the Jewish community and about Israel, but said that she cannot say the same things in public. For me, this is dangerous. Those who are against Muslims in general, might also turn against Jews one day." Dr. Samuels stressed that this does not contradict in any way the necessary pan-European battle against extreme Islam.The Jewish community, and with it all those who oppose the National Front, have but a week now to turn this trend around. According to current estimations, the National Front won’t take over all of the six regions where its candidate came in first at the first round. Still, Marine Le Pen in the northern Pas-des-Calais region and her niece Marion Marechal-Le Pen in the southern Province-Cote d’Azur, might very well duplicate last Sunday’s results. With or without any Jewish vote, these two women might preside over two important French regions in the very near future.Reuters contributed to this report.