Hassan Rouhani, who was supposed to visit France in November but postponed his arrival because of terrorist attacks that killed 130 in Paris that month, landed in the French capital on Jan. 27. 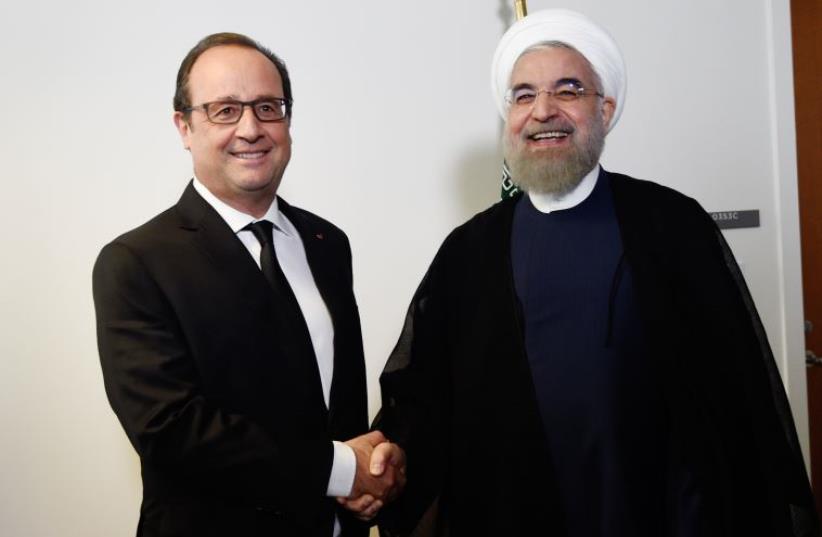 French President Francois Hollande (L) welcomes his Iranian counterpart Hassan Rouhani for a meeting during the 70th UN General Assembly on September 27, 2015, in New York
(photo credit: ALAIN JOCARD / AFP)
Advertisement
French Jews protested against the arrival to Paris of Iran’s president, saying it was particularly unacceptable because it fell on International Holocaust Remembrance Day.Hassan Rouhani, who was supposed to visit France in November but postponed his arrival because of terrorist attacks that killed 130 in Paris that month, landed in the French capital on Jan. 27.In 2005, the United Nations designated that date to commemorate the genocide because that was the day that the Red Army reached the Nazi death camp of Auschwitz-Birkenau in Poland.“The world marks International Holocaust Remembrance Day while France welcomes the Iranian president,” CRIF, the umbrella group of French Jewish communities, wrote on Twitter. “We say ‘no’ to Rouhani,” CRIF also wrote.Rouhani’s five-day visit to Italy and France, which will end Friday, is the first by an Iranian president in nearly two decades, as Tehran seeks to rebuild economic ties and secure new trade deals following the lifting of international sanctions over Iran’s nuclear program.Speaking Tuesday at the French National Assembly, the French lower house, lawmaker Meyer Habib, who used to be CRIF’s vice president, cited Iran’s track record of promoting Holocaust denial, threatening to destroy the Jewish state and its human rights violations as incompatible with French values, and those being commemorated on Jan. 27.Both CRIF and Habib opposed hosting Rouhani in Paris regardless of the visit’s date.Marceline Loridan-Ivens, a Holocaust survivor, and Simone Rodan-Benzaquen, the Europe director of the American Jewish Committee, also lamented the timing of the visit, calling it “laughable” in an Op-Ed they coauthored and that Atlantico.fr, a centrist news and analysis site, published Tuesday.They proposed French President Hollande invite Rouhani to visit with him a local Holocaust commemoration site.