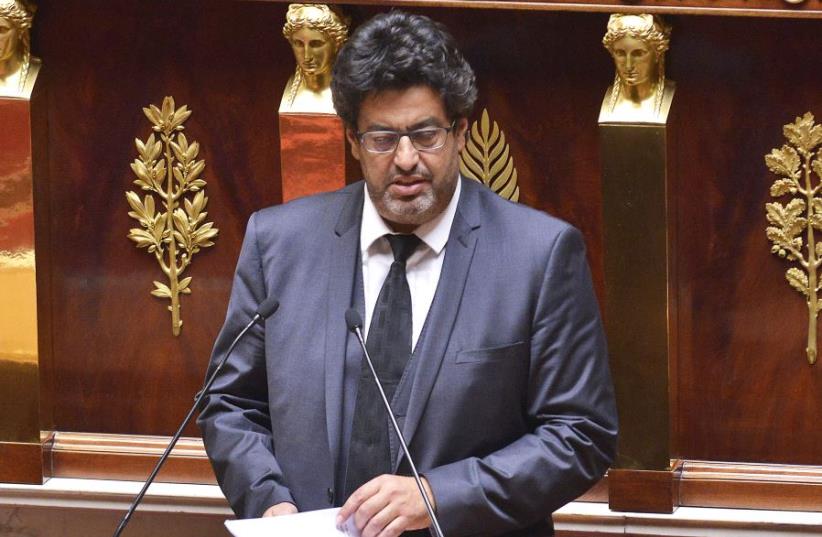 Meyer Habib
(photo credit: THE NATIONALE ASSEMBLY - FRANCE)
Advertisement
A French Jewish MP on Sunday reminded presidential candidate Marine Le Pen of “Europe’s unremitting debt to the Jewish people” after the far-right politician raised objections to dual-citizenship, which, if enforced, would require French Israelis to choose between the two countries.“You can’t ask Jews to choose between their mother and father,” Meyer Habib, who represents expats in Israel and other Mediterranean countries, told The Jerusalem Post while slamming the proposal as unconstitutional.Some 150,000 French Jews are thought to live in Israel. “I want to remind her [Le Pen] that Israel is the ‘life insurance’ of Jews everywhere in the world and that if this country existed 70 years ago there would not have been a Holocaust,” Habib said in a statement.“Even if it does not suit you, we will never demand that French Israelis choose between France and Israel!” he exclaimed.
France is no longer safe, National Front leader Marine Le Pen says
Le Pen, the National Front party leader, said Thursday in an interview with France 2 TV that, if elected, French citizens would not be allowed to hold additional citizenship in non-European countries.During the two-hour interview, French-Lebanese host Léa Salamé asked Le Pen: “So you would ask French Jews who have dual nationality with Israel to renounce their Israeli nationality?” Le Pen replied: “Excuse me, them and others. They can remain Israeli. I’m asking them to choose their nationality.”Habib, however, stressed the connection of dual citizens’ to both countries. “What’s the problem with being Israeli and also French?” he asked, adding that the same rule applies for citizens of other countries who would be affected by such a law, naming Canada, the US, Algeria and Tunisia by way of example.“The problem is not nationality one, two or three; the problem is values,” he said.“What you can’t be is a Jihadist who hates France; rejects its fundamental values and throws back its way of life; [or] represents a lethal threat to French people and [at the same time] hold French citizenship,” he stated, expressing support for proposed measures to strip terrorists of their French passports.Habib also highlighted the infamy of Le Pen’s father Jean-Marie Le Pen – who founded the National Front – and who routinely minimized the Holocaust. Reports emerged Saturday that the elder Le Pen has been charged with inciting hatred for a pun he made in 2014 about Jewish singer Patrick Bruel that apparently referred to the Nazi ovens.The younger Le Pen has sought to move the party past her father’s controversies, but French Jewish leaders still consider the National Front antisemitic.Habib told the Post that while Jean-Marie’s daughter tries to be more politically correct, he does not believe the party’s DNA has changed and expressed confidence that Le Pen will not win the upcoming elections.“She’s not good for France, or for the country or for democracy,” he asserted, opining that both far right and far left are dangerous.Last week, the candidate drew ire from French Jewish leaders when she said the country’s Jews should stop wearing kippot, as a way of helping in the struggle to defeat radical Islam.