French Muslims’ image at stake in wake of terror 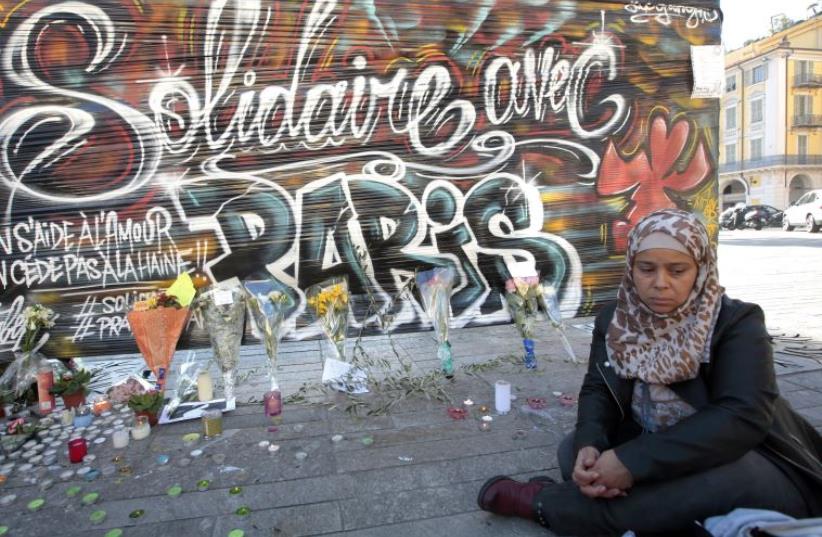 A woman sits by a poster which reads "Solidarity with Paris" in Nice, France, November 15, 2015, after a series of deadly shootings in Paris on Friday.
(photo credit: REUTERS)
Advertisement
PARIS – The French Council of the Muslim Faith was quick on Friday night to condemn the attacks, calling for national solidarity. Similarly, on January 9, shortly after the Charlie Hebdo attack, the head of the council and rector of the Great Mosque of Paris Dalil Boubakeur was one of the first to arrive at the scene, condemning the barbaric act firmly and unequivocally.Indeed, the Muslim community in France has dissociated itself in practically every possible way from Friday’s terrorist acts, but it seems many fear the long term implications of the attacks in public opinion.An imam from a Parisian suburb told The Jerusalem Post, on condition of anonymity, that he is afraid of polarization within French society and of growing Islamophobia.“We keep condemning these acts, but the government needs to speak out louder,” he said. “Not just to call for national unity, but to make it clear that the Muslims in France have no part in these killings.”The imam has reason to worry.Extreme Right protesters barged in on Sunday on a solidarity march in the northern city of Lille, carrying banners that read “throw out Islamists.”For these far-right activists, Middle East immigrants and the French-Muslim community all share the responsibility for the extreme Islam actions.The attitude of French society and of the French political class towards the Muslim community in the country is complex. The French still vividly remember the hunt after Mohammed Merah in 2012, who assassinated French soldier Imad Ibn-Ziaten before attacking the Jewish school Ozar Hatorah in Toulouse. After shooting Ibn-Zaiten, Merah said to the victim that “this is Islam. You kill us, so we kill you.”Riva Kastoryano, research director at the CNRS national scientific research center told the Post that the Muslim community here is extremely distraught.“Their image is at stake. They are rejecting these atrocities, and they are also rejecting any ideological or religious linkage to the perpetrators,” she said.“If you look at social media ever since Friday, you will find many photos of young veiled women who post their picture on Twitter, on Facebook, saying ‘We are united with France.’ Young people of Muslim origin keep emphasizing that the perpetrators of the Friday attacks, together with the terrorists of the January attacks on Charlie Hebdo and the Hyper Cacher, represent just a tiny minority within the French-Muslim community – a minority rejected by the large majority.”Kastoryano explains that the Muslim community in France did not go through the same process undergone by the Jewish community a few centuries ago. Some of the Jews who arrived back then to France, adopted French sounding names.Quite a few of them assimilated into society, embracing French identity.Their Judaism became a private matter of religion, much in line with the Republican values, which champion separation of church and state. But for many within the Muslim community, Islam is not private.“They come from Muslim countries, where Muslim people were the majority, and suddenly find themselves a minority, in a rather secular society. This is a new situation for them. They define themselves as French Muslims, and express openly and strongly this religious identity.On the other hand, they are also adamant in explaining that the ideology of the terrorists is by no means the way of Islam.’’ But not all French people accept these assertions. A survey by the Odoxa Institute published last June by daily Le Parisien indicated that 55 percent of the French feel Islam is too visible in the public sphere. About 76% of them believe Islamophobia is a growing phenomenon.Rue de Charonne at the 11th arrondissement of Paris was one of the locations where terrorists viciously murdered passersby last Friday.Locals and tourists were enjoying the multitude of typical cafés and restaurants in this picturesque neighborhood, when the terrorists attacked. But it is doubtful whether the attackers were aware of the fact that amid these small restaurants, there is also a mosque, well tucked inside an ordinary building. Another small mosque is located on the next street, in a space that served as a shop many years ago. There are no outside signs and no name on the door.These two mosques represent a much larger phenomenon. Despite a population of between five and six million people of Muslim origin (it is illegal in France to publish any official religious statistics), only few mosques have been constructed in France over the past decade. And so, several municipalities offer those who wish to practice Islam discrete locations, which provoke little public objection, and do not require any building permits.As mentioned, the younger Muslim generation proclaims openly its religious identity, but is also very much aware of sentiments around them.Naima, a student at the Sorbonne, is pessimistic.“French people are becoming afraid of Muslims. They hear that the terrorists are Muslim. They see the immigrants coming from Muslim countries. They read about youngsters that are going to Syria to join the Islamic State battle. We can cry out until tomorrow that we are not these people; that this is not Islam.But I think that fewer and fewer here are ready to listen.”