By EYTAN HALON
OCTOBER 4, 2017 12:00
French Prime Minister Edouard Philippe attends a ceremony at the Buffault Synagogue in Paris, France, October 2, 2017.
(photo credit: REUTERS/CHRISTOPHE ARCHAMBAULT/POOL)
Advertisement
French Prime Minister Édouard Philippe announced “a new plan to combat antisemitism” during a speech at Paris’s Buffault Synagogue.Speaking at a ceremony on Monday following the Jewish New Year, Philippe said that the plan, set to be implemented in 2018 to 2020, will be “conceived and developed in close partnership with civil society and obviously [the Jewish community].”One of the key objectives, the French premier explained, is to fight online antisemitism. In particular, he added, there is a need to counter hate that has “overrun social media” and which should not remain unpunished.“A sustainable fight against antisemitism necessarily calls for prevention, through education and culture,” said Philippe.In recent years, France has suffered a wave of Islamist terrorist attacks, including several targeting Jews. Philippe mentioned the kidnap and murder of Ilan Halimi in 2006, the killing of four Jews outside Toulouse’s Ozar Hatorah school in 2012, the attack on the Hyper Casher kosher supermarket in January 2015 and the murder last April of Sarah Halimi in Paris as examples of “the ultra-violence of Islamist terrorism and barbarism.”“When someone attacks a French citizen because of his background or his beliefs,” Philippe continued, “he attacks France and what it holds most precious: its way of life, its values, its heritage... And when you insult a French citizen for these reasons, you insult the memory of those who have given their life to ensure that these values prevail.” 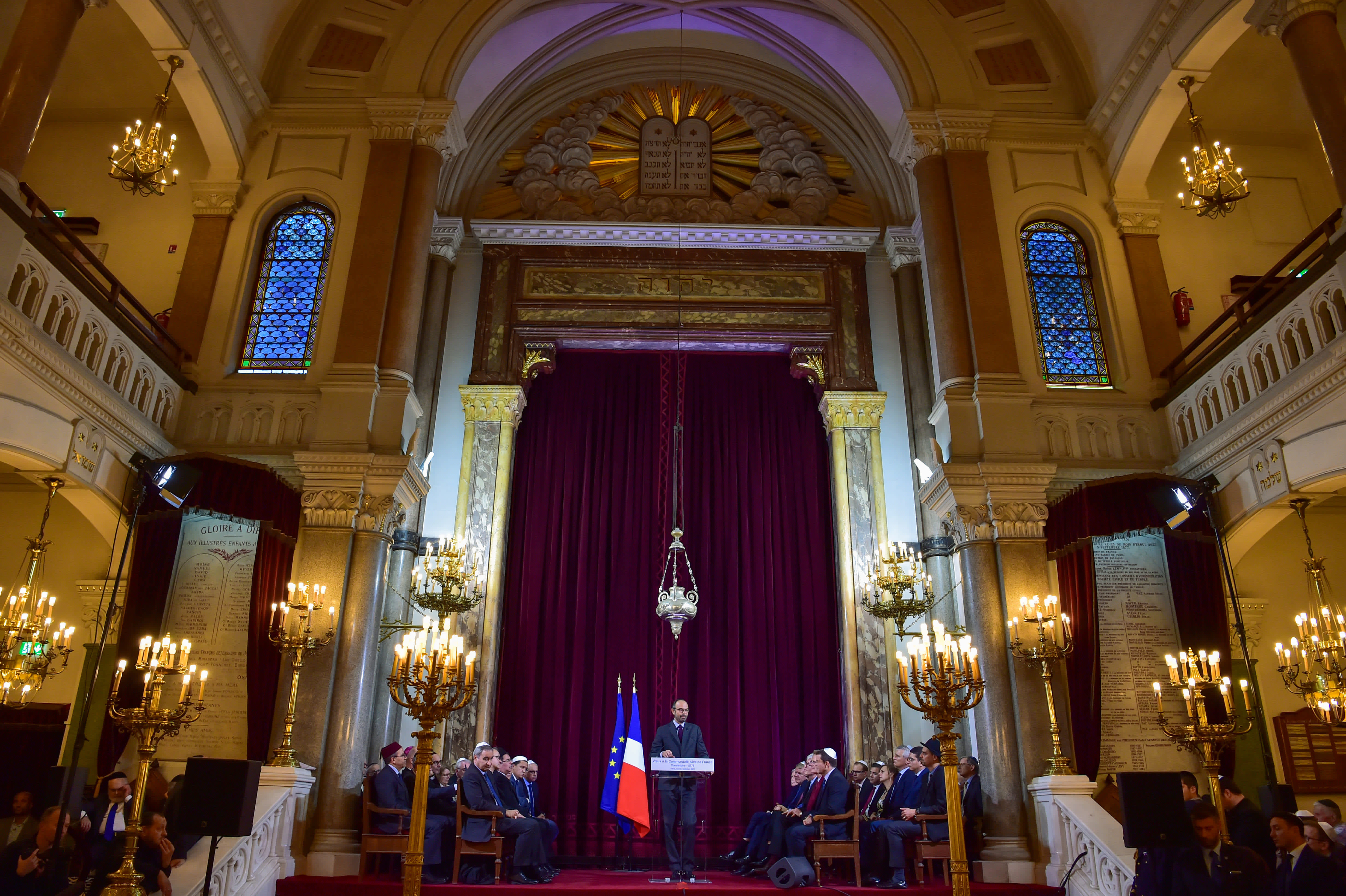 French Prime Minister Edouard Philippe delivers a speech to the Jewish Community for the Jewish New Year, or Rosh Hashanah, at the Buffault Synagogue in Paris, France, October 2, 2017. (Reuters)Philippe emphasized that the “insufficient decrease” in “shameful, cowardly” antisemitism in France does not mean that this dangerous reality has been repaired. “This reality is the normalization of antisemitism, and of its reinvented form, as President [Emmanuel Macron] said, anti-Zionism.”Chief Rabbi of France Haïm Korsia, government officials, ambassadors and former prime minister Manuel Valls also attended the event.Philippe quoted from then-prime minister Manuel Valls’s January 2015 speech to the National Assembly following the attack on the Hyper Casher supermarket: “We cannot permit that, in France, the land of Jewish emancipation two centuries ago, but also that became a place of Jewish suffering 70 years ago, we will hear cries of ‘Death to Jews’ in our streets.“The awakening of antisemitism is a symptom of a crisis of democracy,” Philippe said.The prime minister also paid tribute to France’s “closest partner,” Israel. Philippe saluted the 150,000 French citizens living in Israel, describing them as the best ambassadors of his nation’s language and culture. He highlighted next year’s France-Israel Season, a six-month event that will run simultaneously in both countries, as an example of their close cooperation.Extending his best wishes for the new year to the Jewish community, the prime minister looked forward to developing bilateral ties. “We hold onto this relationship, and we want to deepen it in all ways, economically and culturally,” said Philippe.“President [Macron] has announced his visit to Israel next spring. I would also like to visit next year,” he said.