After posting a tweet with an image that depicted French politician Emmanuel Macron as a conniving, villainous Jew, the Republicans Party came under fire and was forced to apologize. 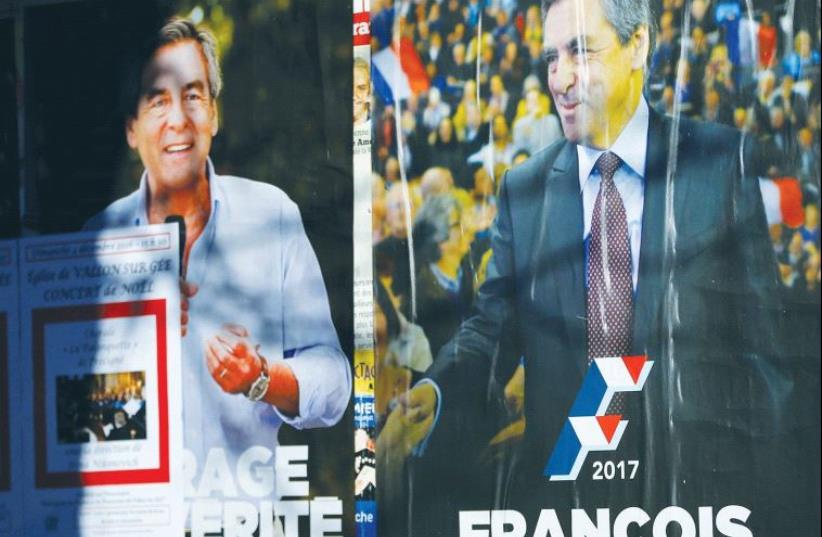 CAMPAIGN POSTERS of François Fillon.
(photo credit: REUTERS)
Advertisement
Francios Fillon's party officially apologized for publishing an antisemitic tweet that targeted Emmanuel Macron, Fillon's main rival in the race for presidency. Francois Fillon's party has apologized for tweeting a caricature of Emmanuel Macron, his main rival in the race to be France's next president, that Fillon himself admitted was antisemitic.Fillon's conservative Republicans party tweeted an image of the independent centrist Macron with a hooked nose, wearing a top hat and carrying a red sickle with which he was cutting a cigar.The image was reminiscent of antisemitic propaganda from World War Two when France's Vichy government collaborated with the Nazis and their deportation and extermination of Jews. While Macron himself is not Jewish, the cartoon appeared to refer to his past as a Rothschild investment banker.A day after the tweet was posted - and subsequently deleted - Fillon called the image "unacceptable" and said he understood the outrage it had caused "because it evoked the images of a dark period of our history and exploited an ideology that I have always fought against.""Politics is tough but it must remain dignified. I will not tolerate my party using caricatures that use the themes of antisemitic propaganda," Fillon tweeted, saying he had demanded his party chief apologize and sanction the people responsible.Despite the fact that the tweet was quickly removed from the party's official Twitter handle, multiple Twitter users were quick to capture the image and engaged in a heated debate concerning the inappropriate use of antisemitic visuals in a political race.

A spokeswoman for Macron declined to comment. Fillon, once considered the favorite to win the presidency, has been badly damaged by a financial scandal and now lies in third place behind Macron and far-right candidate Marine Le Pen in the April 23 first round. Only the top two candidates will go through to a run-off on May 7.