"Zionism is seen as an “extremist movement that is uncompromising and aggressively pursues its goals... and French Jews should refrain from using mentioning "Zionism" to non-Jews," advised CRIF. 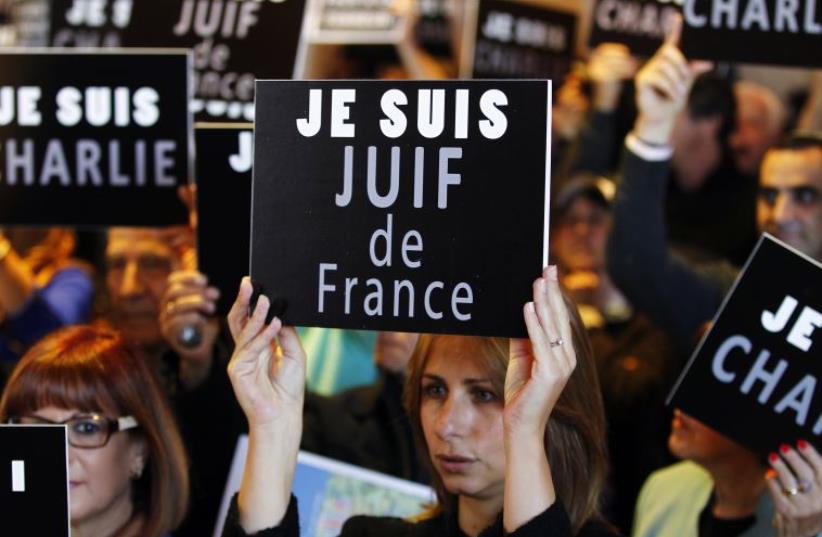 People hold up signs during a rally in Jerusalem, to show support for the French nation and the Jewish victims of terror
(photo credit: REUTERS/Ronen Zvulun)
Advertisement
Stanley Greenberg, a prominent American political strategist from the United States, advised representatives of French Jewry to avoid mentioning Zionism when speaking to non-Jews.Zionism “is seen as extremist and a force mainly in Israel, rather than Europe. Use of the term links your spokespeople to what is seen as an external conflict,” Greenberg, who has advised the campaigns of Bill Clinton and John Kerry, wrote in July to Robert Ejnes, the executive director of the CRIF umbrella group of French Jewish communities.Zionism is seen as an “extremist movement that is uncompromising and aggressively pursues its goals.”In the 17-page recommendation, obtained by JTA, Greenberg also advised CRIF to frame safety issues as pertaining to “French citizens,” rather than French Jews.Greenberg’s advice was based on findings from a 70-person focus group that tested the impact of messaging on subjects relevant to CRIF’s work. The results were released last year.The testing was suggested and paid for by American Jewish philanthropists who wanted to help CRIF combat the rise of violent anti-Semitism in France. The donors wished to remain anonymous, Ejnes said.One far-left voter said during polling: “For me [Zionism is] the Israeli version of Nazism.”Ejnes told JTA he found the findings on Zionism the most unexpected.“All the sectors — Muslims, highly-educated, far-right and far-left voters – they all said the same: Zionism is to Jews what Jihadism is to Muslims,” he said. “It indicates it is very difficult to use the word ‘Zionist,’ in the definition we have of it, in popular discourse.”If the recommendation is implemented, “It wouldn’t be because CRIF has changed its commitment to Israel or Zionism – they are at the core of CRIF and French Jews,” Ejnes said. “But it shows we need to educate people about Zionism while we adjust our message for maximum effectiveness.”While Zionism has a negative effect, Greenberg said, “It is important to value the bond of French Jews with Israel. That bond is seen as strong and normal. ‘Israel’ did not raise a red flag in the groups, and CRIF should continue to promote its cultural and economic diversity.”