American actor Michael Douglas, 70, was honored for his work promoting a more welcoming and inclusive Judaism. 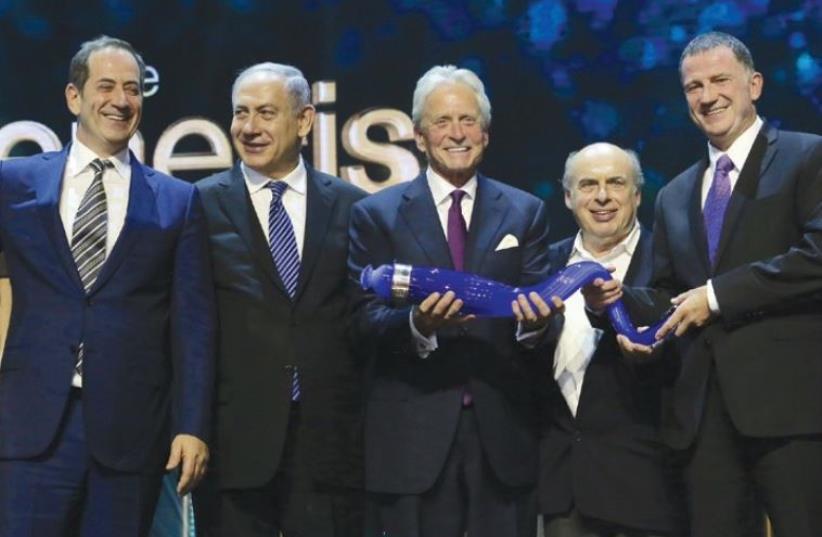 Genesis Prize Foundation CEO Stan Polovets, Prime Minister Benjamin Netanyahu, Michael Douglas, Natan Sharansky and Yuli Edelstein
(photo credit: MARC ISRAEL SELLEM)
Advertisement
“I don’t consider myself your host, I feel like I’m more of your Shabbes goy,” Jay Leno joked during his monologue at the second annual Genesis Prize award ceremony, at the Jerusalem Theater on Thursday night.American actor Michael Douglas, 70, was honored for his work promoting a more welcoming and inclusive Judaism.“The mission of the Genesis Prize group is to honor excellence in one’s chosen professional field, and whose actions and achievements embody the character of the Jewish people who are committed to Jewish values, the Jewish community at large and the State of Israel. And that perfectly describes my friend, Michael,” US comedian Leno explained.“At a time when people around the world debate ‘Who is a Jew,’ choosing Michael Douglas has a profound meaning,” he added.“It’s good to be home!” Douglas proclaimed with glee as he received the Genesis Prize.This year, the Genesis Prize Foundation has awarded Douglas a hefty $3.5 million prize, with $1m. coming from the foundation itself and $1.5m. from the Jewish Funders Network.The Jerusalem Post has learned that Russian-Jewish businessman and philanthropist Roman Abramovich contributed an additional $1m.The foundation and Douglas will work closely together to find the most beneficial way the monies can be re-gifted to enhance the Jewish community.In his acceptance speech, Douglas teared up as he urged Jews to “open their tent flaps... so that all who want to come in and join our tribe know they are welcome."“For if we make those on the outside feel unwelcome, they will never know the joys that I have known: of being welcomed among my brothers and my sisters in a Jewish land; I will always come back to this blessed and heroic place, which for me will always be home.”In a pun playing on the title of Douglas’s first film role, in his father’s Cast a Giant Shadow (1966), Prime Minister Benjamin Netanyahu paid tribute to the actor and his wife Catherine Zeta- Jones’s prolific professional and philanthropic work saying, “You two cast a giant shadow over your profession and set a standard for all actors to follow.”Kirk Douglas had the lead in the movie, playing Jewish-American military officer Col. David “Mickey” Marcus, who was the first general in the fledgling IDF during the War of Independence in 1948.Michael Douglas had an uncredited role as a jeep driver.At the Jerusalem Theater, maintaining a sense of pride for the Jewish community was the theme.“If I have to summarize in one word what it is that we’re trying to foster, that word is ‘pride,’” the prime minister said. “Pride in the Jewish people, pride in the Jewish state. There’s much to be proud of, because the Jewish people is remarkable in so many ways.“The one thing that is unique about the Jewish people, is having been dispersed, they refused to disappear. They kept saying year after, for two millennia, ‘We’ll be back!” Netanyahu boasted, echoing the famous line of another Hollywood actor, Arnold Schwarzenegger.“This is a democracy where Jews and non-Jews alike are equal under the law, it is the one and only Jewish state and they can come and live here from any part of the world, all Jews can feel at home here,” Netanyahu said.“And as prime minister of Israel, I’m committed to strengthen the unity of the Jewish people and I will continue to reject any attempt to delegitimize any Jewish community. Everyone is welcome. Reform, Conservative, Orthodox alike – everyone!” he said, echoing the Genesis Foundation’s primary goal of inclusiveness.“Jay, you come to our Knesset for one day and you’ll have material for a lifetime,” Netanyahu joked.In a good-natured swipe at Netanyahu, Leno said, “I’ve come to cherish my friendship with Prime Minister Benjamin Netanyahu. I know him to be a man of his word – unless of course that word is spoke the day before an election.”“Wow, this is a tough crowd,” Leno observed, noting the lukewarm reception he received compared to at last year’s ceremony, when he emceed the gala honoring former New York mayor Michael Bloomberg.That said, Leno managed to get in a few timely zingers, most notably aimed at the Obama administration.“John Kerry broke his leg riding a bicycle,” he quipped. “In his defense, you know how hard it is to ride a bicycle when you’re back-pedaling?” He added, chuckling: “I actually had more facetime with Netanyahu than Obama has,” in one of the jokes that the audience lapped up.Jewish Agency chairman Natan Sharansky, who heads the Genesis Foundation’s selection committee, told the Post, “Now we have to see if our choice was successful. This prize is not about the great past, it’s about to what extent the person is able to strengthen Jewish values and the importance of Israel. In that sense, I think we made a great choice.”