"We won’t achieve peace by turning our faces against Israel,” Labour's London mayoral candidate Sadiq Kahn said in an interview with the publication, Jewish News. 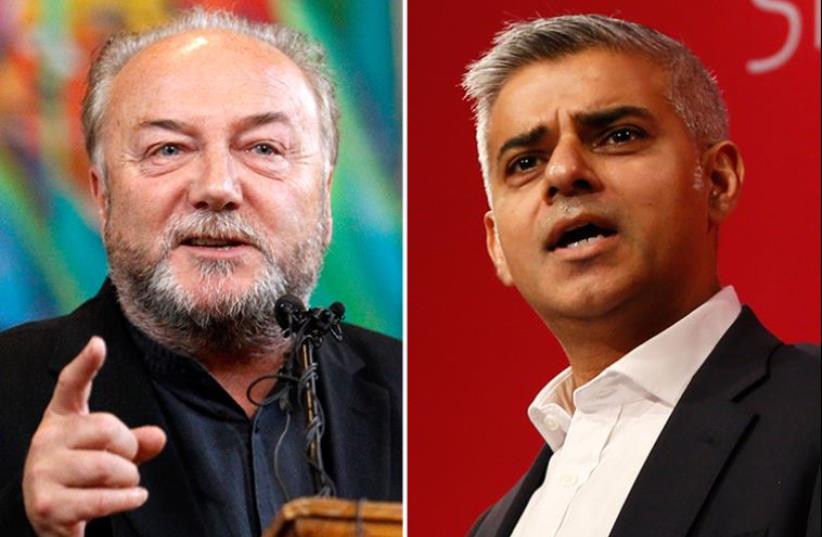 Galloway and Khan
(photo credit: REUTERS)
Advertisement
British Labour MP and London mayoral candidate Sadiq Khan came out against the Boycott, Divestment and Sanctions (BDS) movement in an interview last week, stating that he does not endorse such actions against the Jewish state.Speaking with the London-based publicationm, Jewish News on Febuary 24, Kahn, 46, said that he was unequivocally opposed to the BDS movement, commenting: “I have consistently made absolutely clear that I do not support boycotts, sanctions or divestment of Israel.""We won’t achieve peace by turning our faces against Israel,” Kahn added.On Monday, however, Kahn had removed retweets of the Jewish News Online story from his Twitter page after receiving a wave of negative reactions from Israel critics.Joining the detractors was long-time anti-Israel former British MP George Galloway, who said Khan's statements were "“a new low and should bring him only opprobrium and contempt.”

Even Khan is ashamed of what he said. He tweeted it, then deleted it @alondonforall pic.twitter.com/bSHvT3H0zX
— George Galloway (@georgegalloway) February 29, 2016


Galloway is also standing for London mayor for the Respect party in the 2016 election.

So, if you want a London for property magnates, bankers and celebrants of the Apartheid State vote for Khan! @alondonforall
— George Galloway (@georgegalloway) February 29, 2016

So, if you want a London for property magnates, bankers and celebrants of the Apartheid State vote for Khan! @alondonforall
— George Galloway (@georgegalloway) February 29, 2016

You've got to hand it to Khan, tells you straight. He's with Israel, the bankers, big business. And against Corbyn pic.twitter.com/5E0ytxNin8
— George Galloway (@georgegalloway) February 29, 2016

In a statement released later by the Khan campaign, a spokesperson said that the deletion of the  tweet had been "accidental."On Tuesday the Jewish News article had been retweeted by Khan and  appeared on his Twitter account.


It wasn't the first time Galloway had attacked his mayoral rival over the issue of Israel. In early February, Galloway criticized Khan for his support of a Tel Aviv festival set to be staged next year in the British capital. Galloway made the statement in response to a report in a separate Jewish News Online article after the front-running candidate Zac Goldsmith of the Conservative Party and Khan expressed support for the event.  "So both Zac [Goldsmith] and Sadiq [Khan] are backing a Tel Aviv Festival in London. If I'm Mayor there will be no co-operation with the Apartheid state," Galloway tweeted. Kahn, a British-born politician of Pakistani descent, made the statements shortly after the British government issued guidances stating that local authorities and public-sector organizations in Britain are banned from boycotting Israeli suppliers under new government regulations, and violators could face severe penalties.The British Cabinet Office said that apart from where legal sanctions, embargoes and restrictions have been imposed, procurement boycotts by public authorities were "inappropriate."Reuters contributed to this article.