"Germans are the only people in the world who plant a monument of shame in the heart of the capital," Bjoern Hoecke said. 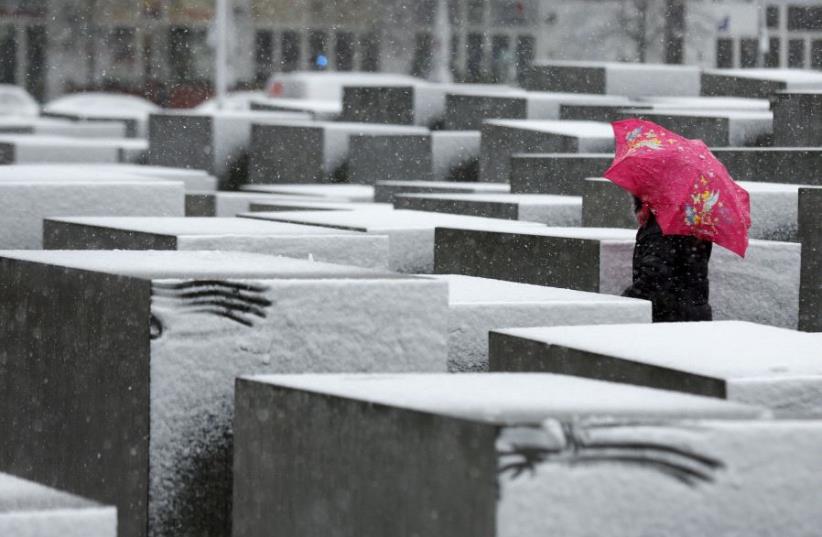 A woman walks through the Holocaust memorial during heavy snowfall in Berlin.
(photo credit: REUTERS)
Advertisement
BERLIN - A German political art group on Wednesday said it had built a pared-down version of Berlin's Holocaust memorial near the home of a far-right politician who sparked outrage by suggesting history books should more focus on German World War II victims.Bjoern Hoecke, a senior member of the anti-immigrant Alternative for Germany (AfD) party, criticized the memorial in Berlin in January, saying: "Germans are the only people in the world who plant a monument of shame in the heart of the capital."The Centre for Political Beauty, a Berlin-based art group, was livestreaming work on a copy of the memorial near the politician's house in a small village in the eastern state of Thuringia.The original memorial includes 2,711 concrete slabs of varying heights, arranged in a grid pattern, that serves as a somber reminder of the six million Jews who were killed by the Nazis.The group said it has collected a third of the 28,000 euros required to keep the replica memorial in Hoecke's neighborhood until the end of 2019.It said it offered to remove the memorial if Hoecke would kneel in front of it and ask sincerely for forgiveness.The AfD politician has defended his speech and denies that he criticized the memorial. He said he had made clear in his comments that the Holocaust was a disgrace and that Germany had a monument to it.Hoecke did not immediately respond to a request for comment on the replica memorial.