The speaker, Lillian Rosengarten, who is a member of the International Anti-Zionist network, accused Israel on the museum’s website of “ethnic cleansing,” “racism” and “apartheid.” 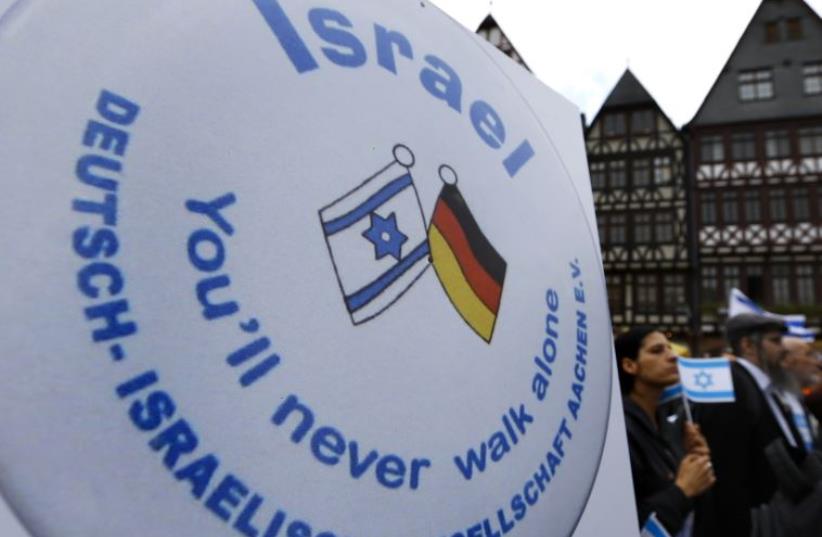 Protesters attend a rally against anti-Semitism in Frankfurt
(photo credit: REUTERS)
Advertisement
BERLIN – A talk titled “Jew against Zionism” slated for Sunday in the municipal museum of Düren has triggered criticism because of the event’s planned anti-Semitic content.The speaker, Lillian Rosengarten, who is a member of the International Anti-Zionist network, accused Israel on the museum’s website of “ethnic cleansing,” “racism” and “apartheid.”“Zionism has been successful in activating a growth in anti-Semitism,” the New York-based Rosengarten said.Dr. Robert Neugröschel, the head of the 1,000-member Jewish community in greater Aachen, which includes the town of Düren, told The Jerusalem Post by the telephone on Saturday that the planned event is a “disgrace and of course anti-Semitic.”Düren has a population of 90,000 and is located in the German state of North Rhine-Westphalia.Dr. Nathan Warszawski, a prominent physician and member of the Aachen Jewish community, was the first to draw attention to the talk, in a letter on Friday to the Sparkasse Düren savings bank titled “Jew-hatred in the space of the Sparkasse Düren.” The bank provided a room for the museum in one if its former offices.Warszawski wrote, “The lecture ‘Jew against Zionism’ has nothing to do with the history of Düren, but rather with spreading anti-Semitism under the cover of anti-Zionism (Israel hate, criticism of Israel).”He noted that the Düren branch of Pax Christi, “the official international Catholic peace movement,” invited Rosengarten. “Pax Christi is known for rejecting everything associated with Israel and is rightly considered an anti-Semitic institution in Jewish circles,” Warszawski said.Axel Holst, from the German-Israel Friendship Society in Aachen, one of the most energetic pro-Israel groups in Germany, told the Post that the event is “disguised anti-Semitism” and is a “form of a dumb mainstream” attack on the Jewish state.“Anti-Semitism is anti-Zionism,” and the converse is also true, Holst added.Post phone calls to the Christian Democratic Union mayor of Düren, Paul Larue, were not immediately returned. Larue, who is currently campaigning for reelection, is listed as chairman of the support association for the museum.Bernd Hahne, the head of the museum’s executive board, told the Post he was aware of the criticism of the event. He said “he has dealt with the Jewish topic for 15 years and is anything but an anti-Semite.” Waiving the “anti-Semitism club is not helpful,” Hahne said. He expects 30 to 40 people to attend the talk.Rolf Terkatz, another board member, told the Post the criticism of the event was “ridiculous.” He, like Hahne, stressed that when one “criticizes Israel it does not mean it is anti-Semitic.”Hartmut Böllert, the treasurer of the museum board, said he was not aware of the controversy because he just returned from vacation. He said he disagrees with Rosengarten’s likening of Israel with apartheid.The remaining board members, Dieter Fücker, Hans-Peter Höner and Helmut Krebs did not immediately respond to Post email and telephone queries.Rosengarten was born in Frankfurt in 1935 and fled Nazi Germany in 1937. In 2010, she was aboard the Irene, a British catamaran that tried to break Israel’s blockade of the Hamas-controlled Gaza Strip. Israel seized the vessel.Helga Dowe, a member of the local Pax Christi group, laughed on the phone when told that there were those who accused the planned event of spreading anti-Semitism. She said her Pax Christi group has not yet decided if it will boycott Israel. Pax Christi in the German state of Thuringia has called for a sweeping boycott of Israeli products.