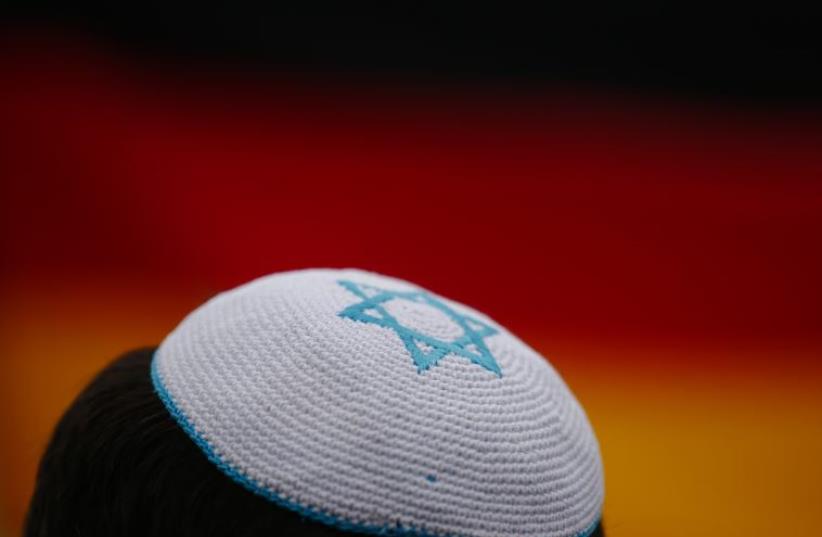 A man wearing a kippa listens to speakers during an anti-Semitism demo at Berlin's Brandenburg Gate September 14, 2014
(photo credit: REUTERS)
Advertisement
The German state of Thuringia announced on Friday it will remove a school book with an antisemitic illustration depicting a video game character – alongside the words “Rothschild Bank” – consuming Europe.A Thuringian Education Ministry representative told the MDR Thüringen news outlet that “like in many other federal states,” Thuringia will remove the book, and called criticism of the book “justified.”The cartoon shows a video Pacman figure devouring Europe, with the Jewish banking family named next to the cartoon.Nazi-era propaganda promoted the anti-Jewish conspiracy theories that the Rothschilds were attempting to conquer the world and destroy the German nation. The Nazis produced an antisemitic film The Rothschilds in 1940.In 2014, Sabine Wölfle, a Social Democratic politician from the southern state of Baden-Württemberg, was accused of endorsing an antisemitic video that she posted on her website titled: “The Power of the Rothschilds.”The schoolbook has been in circulation since 2012. The Thuringian Education Ministry representative declined to comment on the number of books in use in Thuringia’s educational system published by Klett-Verlag.The Berlin-based publisher said it was halting all further deliveries of the book, calling the error “serious.”It told Vice online magazine blogger Philipp Frohn that the “regrettable mistake” would be corrected in a future edition, which will not come out for several years.“The message to pupils... is clear: The driving force behind the whole nasty affair is a bank. A Jewish bank,” he added.The publishing house said no one noticed over the years “the antisemitic caricature and there was no feedback from teachers as well as students and parents.”A spokesman for the German teachers union GEW praised the reaction of the publisher after the revelations surfaced. He added, however, that the company did not exert enough control over the quality of books. Examples of contemporary antisemitism in Germany’s education system have been widespread over the decades.The GEW in Oldenburg published a call by a school teacher, widely viewed as an antisemite, for a complete boycott of Israel.The Simon Wiesenthal Center included the GEW on its list of top 10 outbreaks of antisemitic/ anti-Israel incidents in 2016.“Leaders of the German Teacher’s Union local in Oldenburg have called for a total boycott of Israel. In September, the Oldenburg GEW local published a pro-BDS article by Christoph Glanz, a public school teacher and fanatic opponent of the Jewish state,” the center said.A Jerusalem Post query to Marlis Tepe, the national head of the GEW, was not returned.The state of Lower Saxony, where Oldenburg is located, is considered ground-zero for the spread of anti-Jewish and anti-Israel educational material and activism.Glanz launched new attacks against Jewish Israelis on his Facebook page as “outright racist Zionists” and excoriated “Zionist-interest representatives.”He praised anti-Israel activist Felicia Langer, who left Israel and accepted German citizenship. Langer has compared Israel to Nazi Germany.According to German civil service law, public teachers are required to remain politically neutral.Lower Saxony was rocked by antisemitism and anti-Israel scandals at the HAWK University of Applied Sciences and Arts in Hildesheim and the University of Göttingen.HAWK University held a seminar for more than 10 years that included material saying Israel harvested Palestinian organs and calling it an apartheid state.The University of Göttingen has sought to discontinue the employment contract of a prominent scholar of antisemitism who has written extensively about right-wing extremism. It has also promoted a one-sided “Nakba” exhibit that seeks to undermine the existence of the Jewish state, according to critics.The Social Democratic governor of Lower Saxony, Stephan Weil, has refused to meet with the Berlin office of the American Jewish Committee to discuss allegations of growing antisemitism in his state.Tanja Meister, a spokeswoman for the Lower Saxony Culture Ministry, told the Post that she would soon respond to the criticism.JTA contributed to this report.