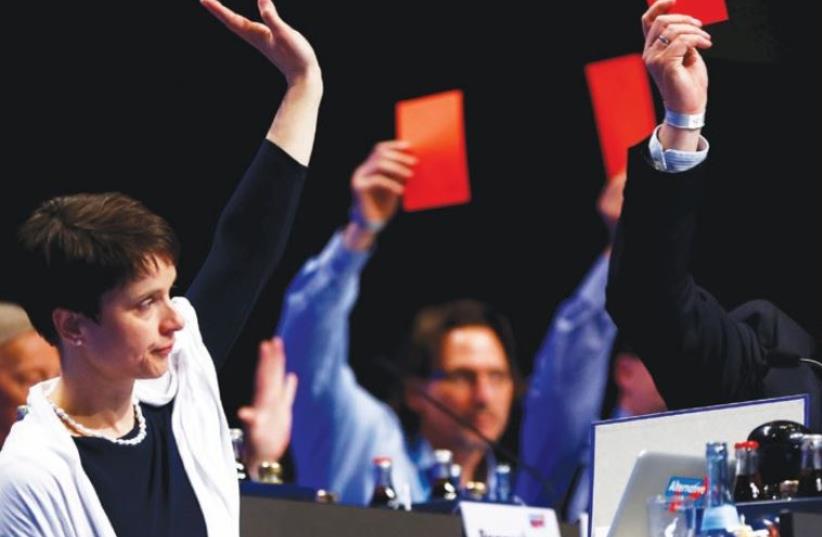 FRAUKE PETRY (left), chairwoman of the anti-immigration party Alternative for Germany, votes during the second day of the party’s congress in Stuttgart in May.
(photo credit: WOLFGANG RATTAY / REUTERS)
Advertisement
BERLIN - A regional branch of the anti-immigrant party Alternative for Germany split in two on Wednesday as a war of words erupted over the party’s handling of an anti-Semitism row with one senior member sharply criticizing party co-leader Frauke Petry.The party has won popular support in Germany due in part to Europe’s migrant crisis, which has seen more than a million refugees arrive in the country over the past year. It now has seats in eight of Germany’s 16 state assemblies.However, the party encompasses a wide range of views which has led to a degree of internal strife. The party’s Wolfgang Gedeon, a doctor turned lawmaker, caused outrage last month for his view that Holocaust denial was a legitimate expression of opinion.Denial of the Nazi Holocaust is a crime in Germany.A row ensued with the state assembly head of Alternative for Germany, Joerg Meuthen, failing to win enough support for Gedeon to be expelled.The crisis came to a head on Tuesday when 13 lawmakers, led by Meuthen, quit the parliamentary party, causing Petry to rush to Stuttgart. The incident led to Gedeon’s resignation.On Wednesday, the Alternative for Germany parliamentary group – originally numbering 23 – officially split into two. Meuthen, widely seen as a moderate within the party, leads one group and Petry has said she backs the remaining members, minus Gedeon.Petry’s involvement has incensed some in the party who do not wholeheartedly support her.In comments widely seen intended to undermine Petry, party vice chairman Alexander Gauland, launched a broadside against her, saying her dash to the state had merely helped escalate the crisis.“I would never have thought of becoming politically active in [the state of] Saxony without Frauke Petry if there were difficulties there,” he said.Petry is head of the party in the eastern state of Saxony.A poll on Wednesday put nationwide support for Alternative for Germany at 9 percent, down 1 percentage point from the previous survey. Germany holds a federal parliamentary election next year.In May, Gauland caused a storm by saying Germans would not want to live next door to national soccer star Jerome Boateng, born in Berlin to a Ghanaian father.