Gloria Mound, who researched expulsion of Jews from Spain, dies at 86

Mound passed away this week at 86 after dedicating almost four decades of her life to researching the history, dispersion and fate who the Jews who exiled from Spain in 1492. 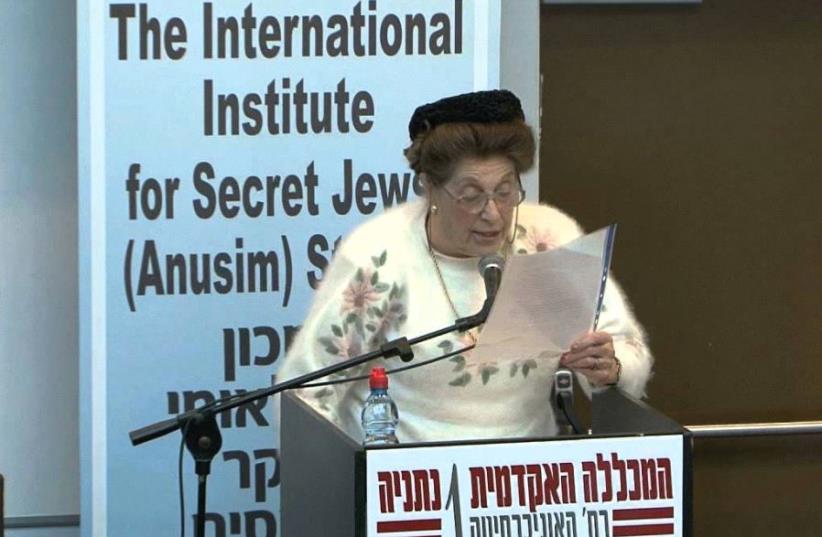 GLORIA MOUND addresses the International Institute for Secret Jews (Anusim) Studies during a January 2013 colloquium at Netanya Academic College.
(photo credit: YOUTUBE)
Advertisement
Untold numbers of people around the world regained their identities thanks to the almost-obsessive persistence of Gloria Mound, a veteran immigrant to Israel from Britain, who devoted almost four decades of her life to researching the history, dispersion and fate of Jews exiled from Spain in 1492, thus opening doors for many of their descendants to reclaim their heritage.Mound died this week at age 86 following a protracted illness. Until the end she maintained her passion for descendants of the exiled Jews of Spain, often referred to as “Anusim,” “Marannos,” “Crypto- Jews,” among other names.Her work started by chance in 1978, when Mound and her late husband Leslie were vacationing on Ibiza in Spain’s Balearic Islands. To their surprise they discovered Jews had been living there since 1492.That discovery prompted the Mounds to return and engage in research, which became increasingly fascinating for them with each new revelation.They came across ancient documents – including a 14th century Scroll of Esther – and four secret synagogues that were in use until the outbreak of the Spanish Civil War in 1936.The more that Mound learned, the more the geography of her research expanded.She and her husband intended to migrate to Israel eventually, but wanted to spend a year on Ibiza before making a permanent move.Early in her studies, Mound was able to trace her husband’s Sephardi lineage back to 1556 in England and 1391 in Spain.The couple set up house on Ibiza in 1985, but instead of one year, they stayed for three before settling in Gan Yavne.They made a point of publishing their discoveries. That sparked interest not only among academics, but also for people worldwide who knew they were of Spanish descent. Many observed customs that were handed down from generation- to-generation along with family Jewish ritual heirlooms, without full explanations for either the traditions or objects.No longer able to rely on their own finances for research, the Mounds began to look for funding. They found it in the form of a three-year grant from the Schalit Foundation, headed by Elie Schalit, a Jerusalem-born shipping magnate who maintained an abiding interest and involvement in Mound’s research until his death in March 2015 at age 94.The grant allowed Mound to research in Spain, USA, Canada, Britain, the Caribbean, South America and Africa.In all those places she met descendants of Jewish ancestors. Many still practiced Jewish customs and traditions without knowing exactly why, other than having heard a parent or grandparent say it was important to do so.With Schalit’s help, Mound established Casa Shalom, a research facility she operated out of her home for several years. In 1994, the facility was officially registered as The Institute for Marrano (Anusim) Studies. By this time, word of Mound’s work had spread, attracting many volunteers to her home to help with documentation or add to the research. Others began to help finance the work.Much as she loved what she did, Mound needed an academic framework. She looked for an institution willing to provide a permanent home for her work and the extensive library she had amassed.What she needed most were commitment and continuity.Netanya Academic College was more than happy to comply.In 2011, Mound transferred her collection of more than 2,500 books – some of them very rare – and 5,000 documents to the school.She was frequently consulted by academics, as well as by individuals who were trying to connect to family histories.Towards this aim, Casa Shalom researched the archives of the International Tracing Service in Bad Arolsen, Germany – which houses perhaps the world’s most complete records of the victims of Nazism – in hopes of learning which victims of Spanish nationality were of Jewish extraction.Casa Shalom also opened a branch office in Jerusalem.Through the years Mound attended conferences, lectured on Crypto-Jews and their descendants, published a monthly newsletter and tried to arrange conversions for those who wanted to return to their ancestral religion.Mound was laid to rest at the Gan Yavne Cemetery on Monday. She is survived by her daughter Ruth Rechtschaffen and her son David Mound. The family is sitting shiva until Saturday evening at the home of her daughter, 37/1 Hish St., Rehovot, phone: 08-945-9176.