Though the image is distorted, the photo is still significant since it does not publish pictures of women. 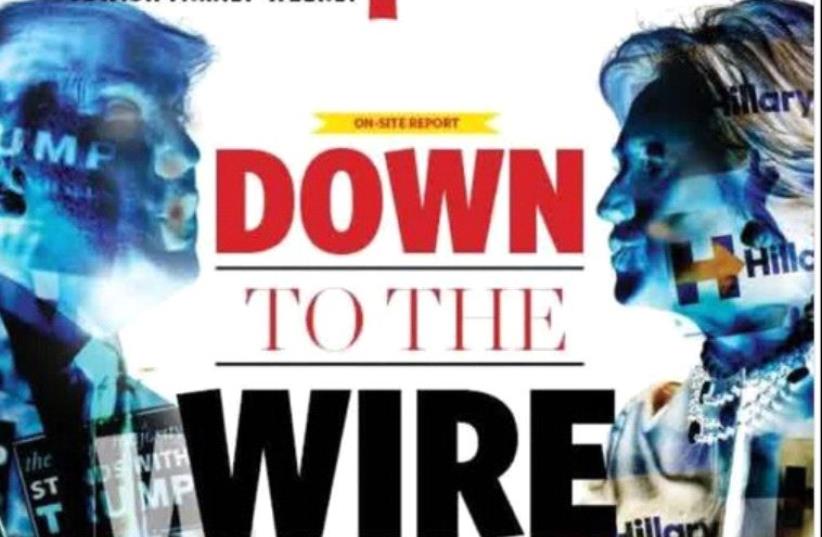 The cover of Mishpacha Magazine for its November 2, 2016 issue featuring Hillary Clinton as the first woman to appear on its cover
(photo credit: SCREENSHOT FROM TWITTER)
Advertisement
The Orthodox Jewish weekly Mishpacha has put a photo of Hillary Clinton’s face on its cover — perhaps the first time a women’s photo has been featured in the magazine or any haredi (ultra-Orthodox) publication.The graphic for the publication’s cover story this week on the 2016 presidential election, “The Finish Line in Sight,” features side-view headshots of both Clinton, the Democratic candidate, and Donald Trump, her Republican rival, facing each other. The headshots are a negative exposure, and include signs and slogans from the campaigns.Some Hasidic and haredi Orthodox newspapers in Israel and the Diaspora have a policy of not publishing photos of women, citing modesty concerns. Mishpacha is published in Hebrew in Israel and in English in the United States, and has subscribers around the world.Clinton complained in 2011 when she was airbrushed out of an official White House photo for use by the New York-based Yiddish language Hasidic newspaper Der Zeitung. The photo showed the iconic White House situation room during the Osama bin Laden assassination on May 1, 2011. The only women in the room, Clinton and Audrey Tomason, then-director for counterterrorism, were airbrushed from the photo.An email from Clinton’s personal server released by the FBI at the beginning of the year under the subject line “Unbelievable” read: “The Jerusalem Post reported today that a NY Hasidic paper Der Zeitung published the sit room photo w/o me (or Audrey T) photoshopped out perhaps because no woman should be in such a place of power or that I am dressed immodestly!!”The airbrushing was first reported by the Failed Messiah website.Der Zeitung apologized to the White House and the State Department for altering the photo. White House photos are provided with the stipulation that they not be altered.