US Jewish leader says valid to criticize American Jewry, comes out against "character assassination" of Oren. 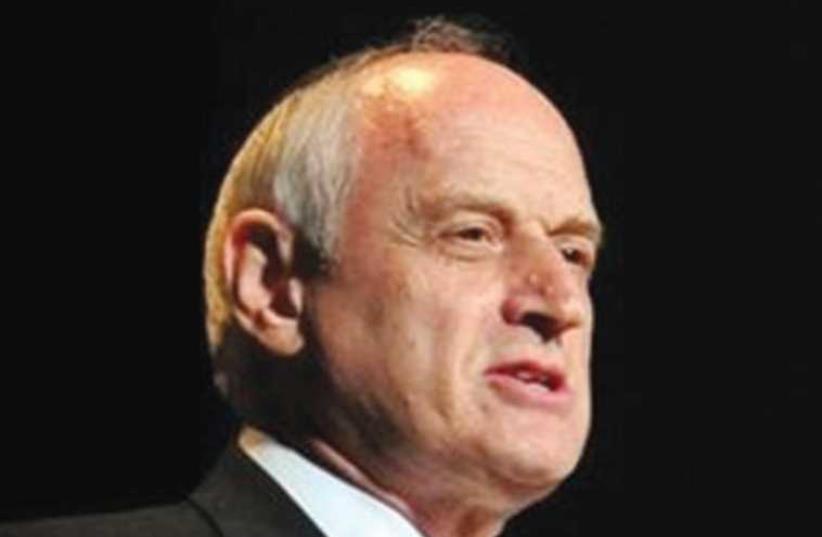 Malcolm Hoenlein
(photo credit: CONFERENCE OF PRESIDENTS)
Advertisement
France is having second thoughts about submitting a Mideast resolution to the UN Security Council that would lock in the parameters of an Israeli-Palestinian two-state solution, Malcolm Hoenlein said on Sunday.Hoenlein, the head of the Conference of Presidents of Major American Jewish Organizations, said at a briefing to The Jerusalem Post editorial staff on Sunday that he was not sure the French will go ahead with their plans to submit a resolution as they will be hesitant to submit a draft resolution if they feel the US will veto it, or if the Palestinians will not be satisfied with a “watered down” resolution the Americans might be willing to let pass.“We’ve met with French officials and they’re telling us now that they’re essentially hesitant or reconsidering and don’t want to introduce it if it will face an American veto or if both parties don’t want it,” Hoenlein said.French Foreign Minister Laurent Fabius was here last month and, according to Hoenlein, heard opposition from both Israel and the Palestinians.“I think they were told by the Palestinians, and certainly by Israel, that they’re not interested in it,” he said. “And I think they’re looking for an alternative way to play a key role here.”Israel views such a resolution as an attempt to impose a solution from the outside.And the Palestinians, he said, were not enthusiastic because they want to focus on the International Criminal Court and are worried that the only way a resolution would not be vetoed by the US would be if it were watered down. They don’t want a “more modified and moderate approach,” he said.Hoenlein said the French were looking for a way to be substantial player in the Mideast and that with their uncertainty now about a Security Council resolution they have come up with the idea of a reconstructed Quartet – which would include, in addition to the US, UN, EU and Russia, several European and Arab states, as well, as their new “vehicle” of involvement.“They want to be a player in the Middle East,” he said.“Some of this, I guess, is reaction toward America and some is just their desire for relevance.”On another matter, Hoenlein came to the defense of former ambassador to the US Michael Oren, who has been sharply criticized by senior administration officials and some American Jews – including ADL head Abe Foxman – for his criticism of the Obama Administration.Oren also has come under a lot of fire for criticizing certain segments of American Jewry in his book.“He’s a historian, he writes a book, people have the right to assess the book to say it’s good, or it’s bad [and whether] it’s appropriate [to publish it] now, or it’s not appropriate now. But I think the character assassination is really inappropriate,” Hoenlein said.Regarding whether Israelis have the right to criticize American Jews, who are increasingly willing to take Israel to task, he said: “American Jewry, all of us, should be subject to criticism if it’s valid, and we have the right to respond if we think it’s invalid.”Hoenlein said that if the underlying theme of the book had been reversed, and if it had been critical of Prime Minister Benjamin Netanyahu rather than US President Barack Obama, it is unlikely there would have been the same reaction.Without saying whether or not Oren’s characterizations of the US-Israel relationship were correct or not, Hoenlein said “there are levels of hypocrisy around [the book] that I think should be examined.”He also said that some in the Obama Administration have been hyper-critical of Israel, including the senior official who called the prime minister chickenshit and have not been held accountable for it.“No one has ever asked to apologize for some of the remarks that they make,” he said.