The demonstration drew to a close after the Spanish and Israeli national anthems sounded. 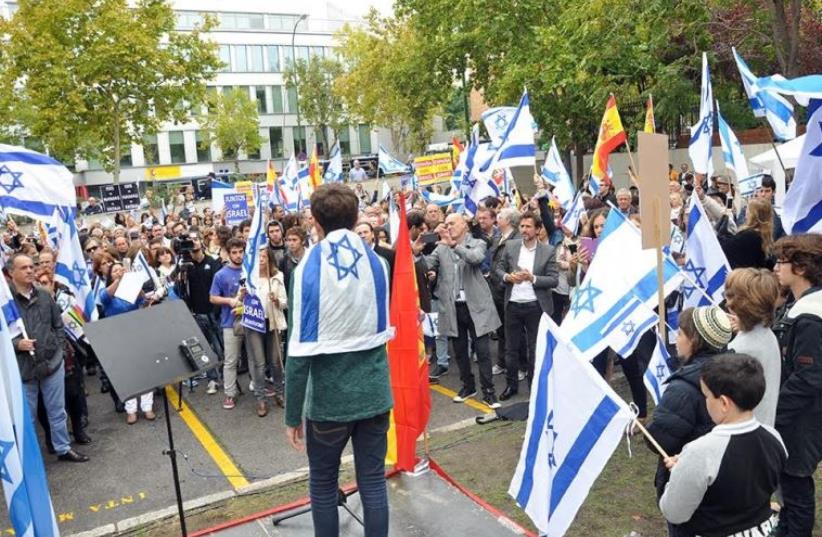 Demonstrators gather to rally in support of Israel
(photo credit: Courtesy)
Advertisement
Some 500 Madrid residents, carrying Spanish and Israeli flags, joined in a demonstration of solidarity with the people of Israel and the recent victims of terror, outside the Israeli embassy on Sunday.In the light drizzle, against a background of Matisyahu, the president of the Madrid Jewish Community, David Hatchwell, addressed the gathering, enumerating the recent terror attacks and pointing a warning finger at Palestinian “made in the Middle East” terrorism, comparing it to other terrorism that is being exported, and warning of potential danger to Europe and Spain if the government does not take a clear stance against terror.He slammed the Spanish Foreign Ministry for its “immoral equidistance” and its use of the terms “cycle of violence” and “disproportionality” when in these cases there were very clearly divided victims and aggressors.Israeli ambassador Daniel Kutner was unable to attend, being out of the country, but he sent his adviser, Yinam Cohen, and a message of thanks for the support shown to Israel in “these difficult times.”ACOM (Action and Communication in the Middle East) president Angel Mas took the microphone to explain that the Jewish state was “the last frontier between civilization and barbarism.” He called it “our frontier,” namely, “the one we have to help preserve, supporting those who defend it for us and our families.”Mas also criticized the Spanish Foreign Ministry, saying that “every time Israel builds a house, the ministry jumps to write a condemnatory statement, because of the ‘terrible danger’ that such a move is, for peace. And yet, but when bloody butchering terrorists go out into the streets and stab innocent people, run them over or shoot at them, this ministry is incapable of even mentioning the word ‘terrorist’ in its statement, and cannot condemn these incidents, using in instead ambivalent and equidistant expressions both for victims and their killers.”Hatchwell read out a manifesto signed by Jewish communities across Europe, condemning the use of children as terror agents and the indoctrination of young people, sent to fanatically stab and kill as many as possible.It expressed rejection of “those governments and media that speak of freedom, but who, in their majority, are accomplices in covering up the truth, equating victims with attackers, while denying them the right to defend themselves.”Hatchwell continued to “censure” those “who seek to divert attention from the systematic wave of political and sectarian murders committed in the countries adjacent to Israel (the death toll has surpassed the 300,000 mark), giving less airtime to these crimes, and comparing them to the Israel-Palestinian conflict.”The manifesto committed, “once again,” to cessation of violence and towards a peaceful Middle East and asked all citizens to show their solidarity with the State of Israel, and to “condemn those who applaud, or are indifferent to, incitement to death.”“At the same time,” Hatchwell said, “we lament the kidnapping of the immense majority of the Palestinian people who are being held hostage by a fanatic and hypocritical government that uses international help to build terror tunnels.”He spoke of the Palestinian Authority’s constant incitement to hatred, as well as its “terrible lies,” in which it imitated language used by Goebbels, Hitler’s propaganda minister.  The demonstration drew to a close after the Spanish and Israeli national anthems sounded.“The rain stopped and a soft breeze started. It seemed to be blowing the winds of change towards the Middle East,” said a spokesperson for the community.