'I was the campus anti-Semite,' says reformed Muslim Zionist

The lifework of a former jihadist is to “get the truth out” about Israel and help others do so too. 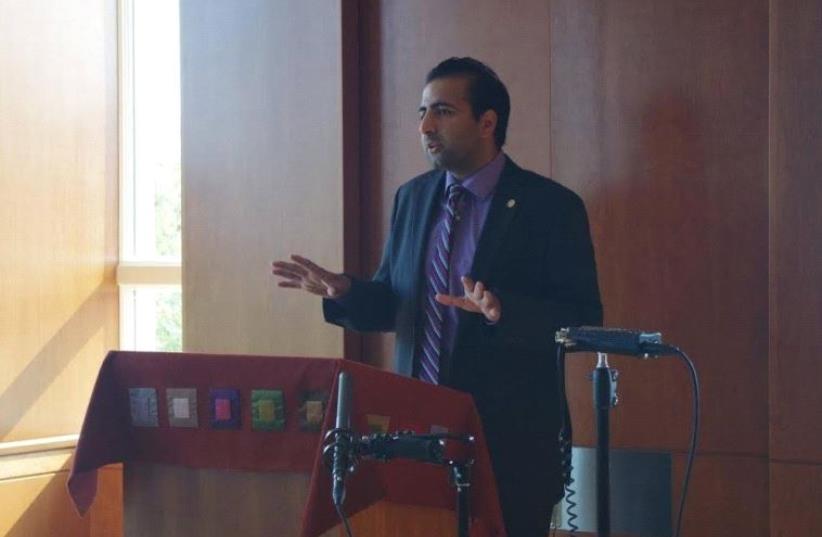 Kasim Hafeez speaking at CAMERA's Student Leadership Conference 2015
(photo credit: COURTESY CAMERA)
Advertisement
Kasim Hafeez's pro-Israel activism on university and college campuses today, is a far cry from when he was a student himself. "I was the campus anti-Semite," he confessed, looking back to his days as a Politics student at Nottingham Trent, UK. Hafeez, 32, is a British Muslim of Pakistani origin whose full time job now, is working as the Outreach Coordinator for Christians United for Israel. But some ten years ago, he was busy making noise on his own campus, in the opposite direction: "If Israel even sneezed in the wrong direction we were protesting. We held events with speakers who were blatantly anti-Semitic, but we couched it by saying they were anti-Zionist. I was generally obnoxious, loud and threatening," he admits. Now living in Canada, Hafeez, is due to speak next week at a conference on anti-Semitic and anti-Israel activity on campus, hosted in Boston by the Committee for Accuracy in Middle East Reporting in America. There he will share the story of his transition from Islamic radicalism to pro-Israel activism - a subject he has related to students of different religions, ethnicities and backgrounds on campuses across the globe. His departure from the UK was largely due to the shift in his politics, and the huge strain it put on his personal life.Hafeez grew up on a diet of anti-Semitism and anti-Zionism, with a father who frequently praised Hitler. American lawyer and author Alan Dershowitz can take credit for his drastic switch, which began in 2005. "I think it was arrogance that made me pick up The Case for Israel (by Dershowitz)," Hafeez says frankly. "I saw it and thought it was ridiculous. I thought I was an expert on the Middle East, I thought Israel was a Nazi state. I thought I could disprove the entire argument with ease - but it didn't work out way." Reading the book introduced Hafeez to a narrative he had never heard before. This was the beginning of Hafeez’s journey to the Israel advocate he is today, which lost him friends and family along the way. He hasn't spoken to his father in years and the rest of his family has yet to accept his changed outlook.Despite the huge personal sacrifice he has made, he is utterly confident that he is doing the right thing. "I believe that we are all accountable for what we do and I don't want to look back and think I took the easy route," he told The Jerusalem Post. "Anti-Israel activism has been a huge gateway for wider Muslim extremism." He says he has seen firsthand how corrosive this has been on the Muslim community. "If I can do anything to stem that - if even one kid doesn't have to deal with the rubbish and hatred that I had to, then I see that as a win," he says."Sometimes you have to put your own personal conflicts aside," he added. "What Israel faced yesterday, the rest of the world is facing today, so this one of the most important causes of my life and our generation," he said in reference to the growing global terror threat. Hafeez describes himself as a traditional Muslim, and believes his identity helps at times, to get the pro-Israel message across. "I think people are intrigued by fact that I'm not a Jew," he reflected. "There's almost a mindset that if you’re Jewish then you’re pro-Israel so a lot of Jewish voices get dismissed. I think it’s good when you have diverse voices speaking out in support of Israel because it also reflects the ground reality of Israeli society." Hafeez has visited Israel about a dozen times and the West Bank three times.Of course, he has also experienced a lot of backlash, and learned to entirely avoid certain areas in Nottingham, where he used to live. He’s received hate mail to the point where he sounds almost blasé about death threats. “Yes, sometimes I get very poorly spelt and grammatically incorrect death threats on the Internet,” he laughed.Hafeez doesn't have a strong opinion on the Israeli government one way or the other. He only stresses the democratic right of the Israeli people to elect their government, and said, "no matter what one's opinion is of the government, it doesn't give them the right to delegitimize Israel's existence." He said it's important to identify what's wrong and what's right on both sides of the Israeli-Palestinian conflict but flags a "default position" to blame Israel for everything. "I think one of the biggest perpetrators of crimes against Palestinians is their own leadership, by brainwashing, embezzlement of money, etc. Buts it's more convenient for them to place the blame on Israel." Looking ahead to the upcoming four-day CAMERA conference, Hafeez hopes the participating students leave inspired. "I hope they realize they can make a huge difference. People feel helpless and they don't realize the impact that they can make. That's my one hope - that they can fight for what is right and get the truth out." Hafeez believes that building relationships and crossing divides is instrumental in conveying one's argument. "It's much easier to reach out to people you have built a relationship with and to tell them your story, rather than handing them a flyer."