The conference has allocated a total of $392 million to more than 300 organizations in 2017. 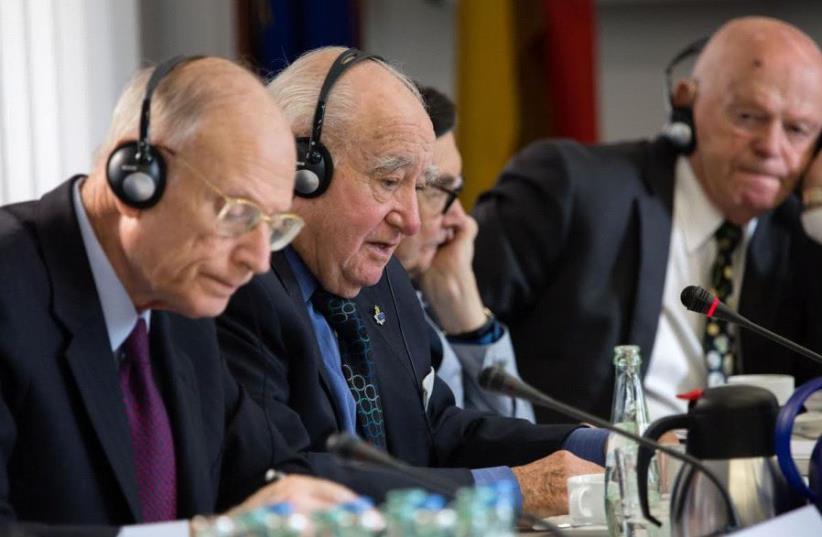 Ambassador Eizenstat is the closest to camera Next to him are Auschwitz survivor, Roman Kent and Marian Turski last is Ben Helfgott, survivor of Buchenwald
(photo credit: MARCO LIMBERG)
Advertisement
The Conference on Jewish Material Claims Against Germany have announced that Holocaust survivors of the death trains, pogroms and ghettos in Iasi, Romania, will for the first time be eligible to receive compensation pensions.Wednesday’s statement follows negotiations between the Conference and the German government that took place this week.Claims Conference special negotiator Stuart Eizenstat said, “The horrors inflicted on the Jews of Iasi have finally been recognized more than 70 years later. These survivors endured unimaginable suffering. For those who are still with us, we have obtained a small measure of justice, even after all this time.”Between 13,000 and 15,000 Jews were murdered in the Iasi pogrom. Some who survived the initial massacre were forced onto train cars, where they were left for days while the train traveled back and forth across the countryside, killing most of the occupants through suffocation, dehydration and starvation. Those Jews left behind in Iasi were forced into a designated section of the town set up as an open ghetto, under curfew, where they lived in constant fear of deportation to labor camps and endured regular beatings and cruelty by both German and Romanian soldiers.The Claims Conference has negotiated for an increase in home care and other services in its programs around the world.Additional funds will be used in part to provide pensions to Iasi survivors who do not currently receive one.Iasi survivor Frances Flescher said, “Jews from Romania, we went through hell, and they didn’t recognize it. We were persecuted and wore yellow stars and the hunger that we went through and everything.I don’t know every place, but I know in Iasi what we went through.”More than the additional financial support, Flescher was concerned that she and those who survived from her town will now receive long overdue recognition of their suffering.Other changes agreed upon by the German government include an increase in the in-home services budget for 2018, from $399 million to $462m. This funding is allocated to social welfare agencies around the globe that are Claims Conference grantees.The amount of time spent living in hiding or under false identity to qualify for a Claims Conference pension was decreased from six to four months. According to the Conference, this will affect some 1,000 survivors who lived in hiding or under false identity for between four to six months.“It is impossible to quantify the suffering of a survivor who lived in terror of being caught or revealed as a Jew, which would have been an instant death sentence. Those survivors who lived under these conditions for even a few months deserve the acknowledgment that these payments provide,” said Greg Schneider, Claims Conference executive vice president.Eligibility for the Hardship Fund will now be open to those who previously received a onetime payment that is less than the amount paid today. The amount of the previous payment will be deducted from the Hardship Fund amount of $2,918. An estimated 5,000 survivors will benefit from this amendment, according to the Conference.“Although no amount of money can ever compensate for the indescribable suffering and losses of Holocaust survivors, these elderly heroes deserve the recognition that these increased payments will provide,” said Claims Conference president Julius Berman.The Conference has allocated a total of $392m. to more than 300 organizations in 2017. These funds will support Holocaust survivors in 45 countries with home care, food programs, medical care, dental work, emergency cash assistance and transportation.The Conference has in the past been marred by corruption.The organization lost $57 m in a massive fraud scam uncovered in 2010.The organization and Germany have also been criticized for failing to meet the needs of Holocaust survivors around the world. Ahead of this week’s negotiations, US Rep. Ileana Ros-Lehtinen, chairwoman of the Congressional Subcommittee on the Middle East and North Africa, issued a statement urging Germany to “step up” and for Claims Conference leaders not to “accept anything less than a comprehensive, permanent, and accountable commitment to fully fund survivors’ medically prescribed needs.”

Tags holocaust survivors before and after
Advertisement
Hot Opinion