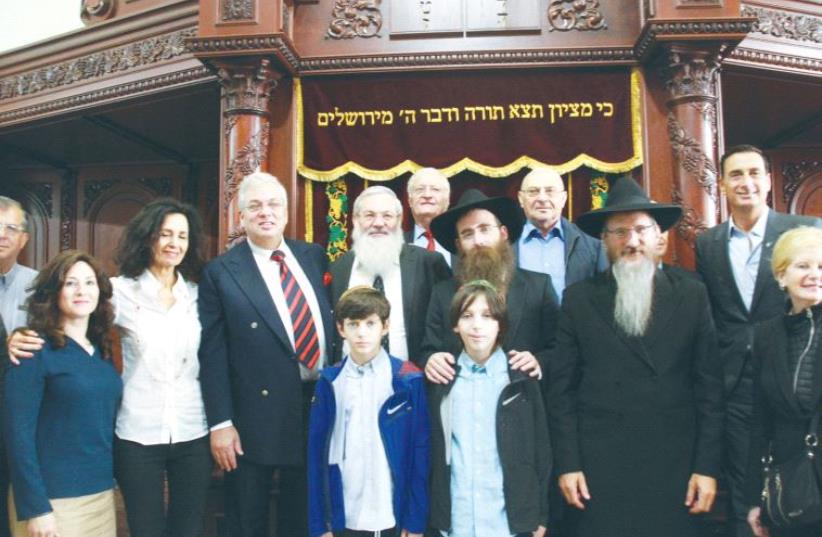 FAMILY MEMBERS and Limmud FSU participants gather at a memorial ceremony for the late IDF Maj.-Gen. Yanush Ben-Gal at the Kazan synagogue.
(photo credit: SARAH LEVI)
Advertisement
KAZAN – Russia’s chief rabbi and several IDF generals commemorated a late war hero in a city he passed through while fleeing Europe during the Holocaust.Avigdor Ben-Gal, better known as Yanush, died in February in Israel, a country he reached in 1943 at the age of six together with hundreds of other orphaned refugees from their native Poland, who are known as the Tehran Children. He was revered in Israel for his role in blocking far superior Syrian forces from advancing into the Jewish state in 1973.“Yanush saved the State of Israel,” said Deputy Defense Minister Eli Ben-Dahan, during a commemoration service for Ben-Gal on Sunday at the synagogue of Kazan, a city located in southwest Russia.The ceremony, attended by Ben-Gal’s widow, Avital, and two of his seven children, the 12-year-old twins Tohar and Ilai, was organized by Limmud FSU, an organization that sets up Jewish learning conferences for Russian-speaking Jews, including in Kazan.Berel Lazar, the chief rabbi, highlighted in his eulogy for Ben-Gal his humanity, which Lazar traced back to Ben-Gal’s difficult childhood.“He helped others around him in need because he never forgot his hour of need,” Lazar said. “He recognized hunger in others because he had experienced it.”Some 500 Russian Jews of all ages came together Sunday at the event in Kazan for the city’s second annual Limmud FSU conference.Limmud FSU is the brainchild of Chaim Chesler and Sandra Cahn, who are dedicated to restoring a tradition of Jewish learning and strengthening Jewish identity in the Diaspora.The residents of Kazan, a predominantly Muslim city, are proud of their ability to coexist with their Jewish and Christian inhabitants. Its mascot – a dragon that, according to local folklore, “keeps the hate away” – is representative of the city as a bastion for tolerance.Workshops, lectures, live music and activities for kids, including a magic show and a workshop on ice cream making, were all on tap for participants who hailed not only from Kazan but from all over the former Soviet Union, including, Kazakhstan, Georgia and parts of Russia.Lectures touched on a variety of topics, such as mythology, the male/female dynamic in a romantic context and a Kabbala workshop.The event benefited from the help and past efforts from Taglit Birthright, the Jewish Agency, MASA and Chabad to reconnect Russian Jews to their roots that were severed during communism.Cahn firmly believes this is an important step to “bring the Jewish people of the Soviet Union back to their traditions,” and to enable them to “feel connected to their history and community,” she told The Jerusalem Post during the conference.After a full weekend of learning, socializing and eating, the participants were treated to an open-air concert of selections from a Jewish trifecta: the Pushkin Klezmer band from Ukraine; The Shuk from Israel; and Ahava from Kazakhstan.Old and new friends of all ages danced and enjoyed the festive atmosphere under the stars as the lively music pumped through the speakers in this sleepy village hotel in Tatarstan.During the concert, event project manager Tatiana Pashaev, boasted that “this event has proven more successful than the previous one because, unlike last year, this one has more people from other parts of the region.”The conference made a point to honor the memory of Elie Wiesel. A traveling exhibition that highlights the life and times of Wiesel is on display at the Kazan Synagogue. Before Kazan, the exhibition opened in Moscow.JTA contributed to this report.