'I'm ashamed I did nothing to stop injustice,' ex-Nazi SS officer says

Reinhold Hanning is being charged by a German court with being an accessory to the murder of at least 170,000 people. 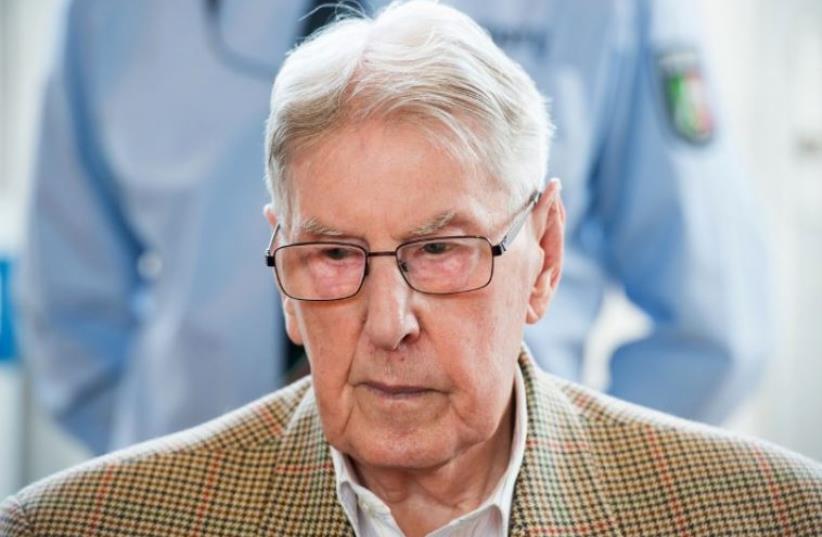 Former Nazi SS officer Reinhold Hanning appears in court in Germany
(photo credit: AFP PHOTO)
Advertisement
A 94-year-old former Auschwitz guard on trial in Germany apologized in court to victims on Friday, telling them he regretted being part of a "criminal organization" that had killed so many people and caused such suffering."I'm ashamed that I knowingly let injustice happen and did nothing to oppose it", said Reinhold Hanning, a former Nazi SS officer, seated in a wheelchair in the court in Detmold.Hanning is charged with being an accessory to the murder of at least 170,000 people.Holocaust survivors, who detailed their horrific experiences at the trial which opened in February, have pleaded with the accused to break his silence in what could be one of the last Holocaust court cases in Germany.Hanning finally broke the silence he kept over the course of 12 hearings, each limited to two hours due to his old age.Reading in a firm voice from a paper he took out of his grey suit pocket, he said: "I want to tell you that I deeply regret having been part of a criminal organization that is responsible for the death of many innocent people, for the destruction of countless families, for misery, torment and suffering on the side of the victims and their relatives.”"I have remained silent for a long time, I have remained silent all of my life," he added.Just before, his lawyer, Johannes Salmen, had given a detailed account of the defendant's view of his life and particularly his time in Auschwitz. In this 22-page long declaration, Hanning admitted having known about mass murder in the death camp in Nazi-occupied Poland."I've tried to repress this period for my whole life. Auschwitz was a nightmare, I wish I had never been there," the lawyer cited Hanning as saying.The accused was sent there after being wounded in battle and his request to rejoin his comrades on the front had been rejected twice, he said."I accept his apology but I can't forgive him," said Leon Schwarzbaum, a 95-year-old Holocaust survivor and co-plaintiff.She said Hanning should have recounted everything that happened in Auschwitz and "what he took part in.”Although Hanning is not charged with having been directly involved in any killings at the camp, prosecutors accuse him of facilitating the slaughter in his capacity as a guard at the camp where 1.2 million people, most of them Jews, were killed.A precedent for such charges was set in 2011, when death camp guard Ivan Demjanjuk was convicted. Accused by the prosecutor's office in Dortmund as well as by 40 joint plaintiffs from Hungary, Israel, Canada, Britain, the United States and Germany, Hanning is said to have joined the SS forces voluntarily at the age of 18 in 1940.Hanning on Friday said however that his stepmother, a member of the Nazi-party, urged him to join.A verdict is expected on May 27.Germany is holding what are likely to be its last trials linked to the Holocaust, in which more than six million people, mostly Jews, were killed by the Nazis.In addition to Hanning, one other man and one woman in their 90s are accused of being accessories to the murder of hundreds of thousands of people at Auschwitz.A third man who was a member of the Nazi SS guard team at Auschwitz died at the age of 93 this month, days before his trial was due to start.