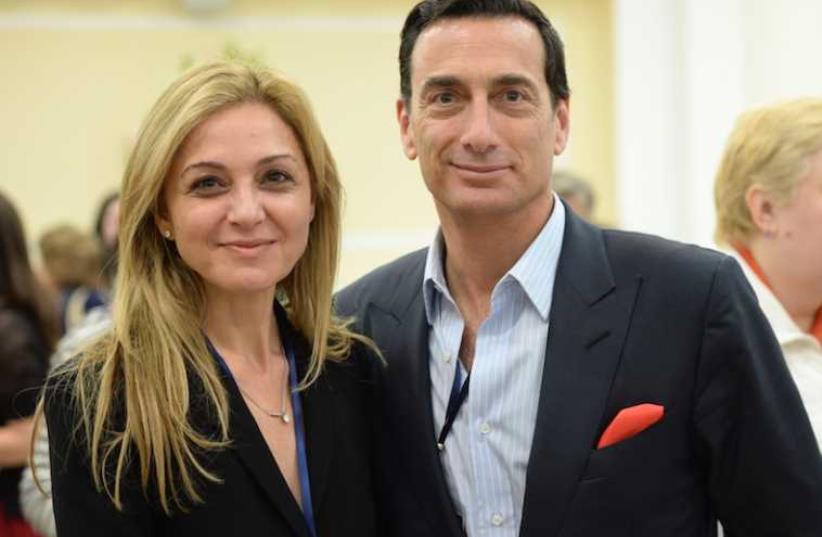 Mattew Bronfman and Michal Grayevsky pose together in Moldova on Sunday
(photo credit: BORIS BUCKMAN)
Advertisement
Following an emotional homecoming by Matthew Bronfman to Moldova, where his family fled Jewish persecution in the late 19th century, on Sunday philanthropist and cosmetics business mogul Ronald Lauder announced a major donation to Limmud FSU.Bronfman, who chair’s the organization’s international steering committee, made a three-day sojourn to the country over the weekend with his 19-year-old daughter Sasha to attend Limmud’s third conference in the capital of Kishinev.Limmud FSU (former Soviet Union) was founded nearly 10 years ago by Chaim Chesler of Israel and Sandra Cahn of New York, to reconnect young Russian-speaking Jews from countries in the region, and around the world, following the fall of Communism.The organization has since hosted over 30,000 Jews from the former Soviet Union at dozens of conferences featuring lectures from Jewish luminaries and scholars.  Among the 400 participants who attended the Moldovan conference was Michal Grayevsky, president of JCS Inc., and a representative of Lauder. Grayevsky was invited by Bronfman to personally experience the event.“Mr. Lauder is proud of what Matthew Bronfman is doing for young Russian-speaking Jews everywhere, and stands alongside him,” said Grayevsky.According to Chesler, the last time that Bronfman and Lauder coordinated their efforts was via the Jewish Congress several years ago.“Mr. Lauder understands how dire the situation is in Ukraine and neighboring countries,” said Chesler on Sunday. “Recently, the two leaders decided to support each other and do everything they can to help and commit to the needs of Russian-speaking Jews all over the world.”
“Mr. Lauder has now committed significant dollars of his own to the Limmud FSU project,” said Cahn.
“It is a symbol of his commitment to the Jewish identity through informal Jewish education of young people for their future.”