In Sweden, a Kristallnacht commemoration without Jews

Some believe the gathering has been repurposed for anti-Israel political reasons. 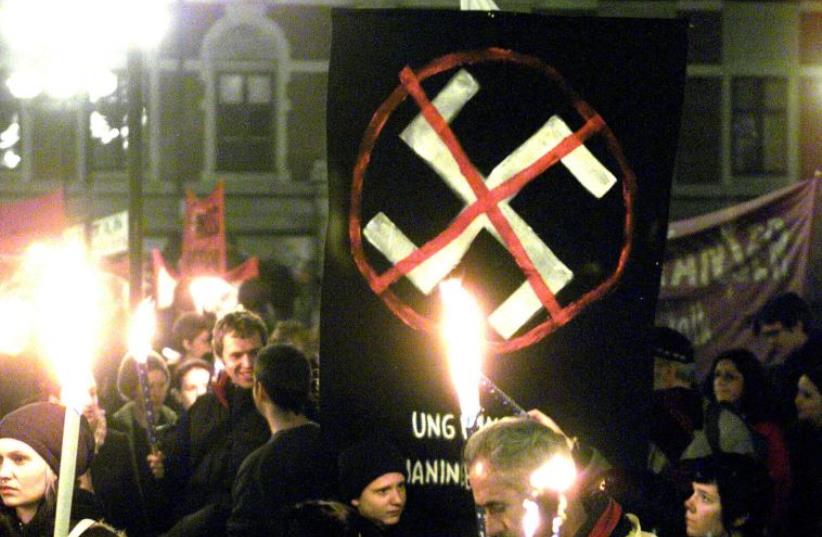 Some thousand people hold banners and torches as they gather in the Maria Square in Stockholm on November 9, 2000, to protest against racism on the anniversary of the Kristallnacht
(photo credit: BERTIL ERICSON / SCANPIX SWEDEN / AFP)
Advertisement
In the Swedish city of Umea, organizers of a Kristallnacht commemoration have been accused of excluding the last group anyone would have expected, the Jews.The Kristallnacht pogroms, carried out in territories controlled by Nazi Germany on November 9-10, 1938, resulted in the destruction of 267 synagogues and the internment of 30,000 Jewish men in | concentration camps.According to local media and the leader of the city’s small Jewish community, organizers from the local branch of the Arbetarpartiet, or Workers Party, failed to invite them to attend or address the gathering, which some believe has been re-purposed for political reasons.Carrine Sjöberg, head of the city’s organized Jewish community, said she was shocked to learn that the reason she was not contacted was because organizers believes that “Jewish people will be scared to come” because often Israeli flags are on display with swastikas daubed across them.She cited a statement by Jan Hägglund of the Arbetarpartiet, one of the primary organizers, to a local paper in which he asserted that he had not involved the Jews because “it can be perceived as an unwelcoming or unsafe situation for them.”Representatives of the various political parties involved in arranging the multi-partisan event told conflicting narratives of what happened.While according to of the Vänsterpartiet (Left Party), a “lack of communication” was the “main reason for this tragic misunderstanding.”“We would never exclude anyone… this should be an event that is unifying and not a matter of division,” she said, adding that she was unaware of Nazi symbols appearing at previous rallies.While in the past the gathering was a “narrow affair for ‘leftists,’” this year seven political parties got together to expand it, said the Arbetarpartiet’s Davis Kaža.“As far as I know, the Jewish Community were never invited in previous years,” he asserted.“However, this year, they were invited. For me it is completely incomprehensible that a lot of people are attacking this rally, this year, when it has taken a huge step in the right direction.”Hägglund told The Jerusalem Post that Sjöberg, who is active in local politics, was invited to the event by a member of her own Liberal Party and she declined,citing a prior engagement, after which he asked for another Jewish representative to appear.“This kind of rally has been organized in Umeå for about 25 years.Sometimes the people responsible for the rally haven’t been clear on the question if they support the right of the Israeli state to exist or not. This year, it was my intention to change this,” Hägglund said.“My intention was to make sure the organizers, on the one hand, were very clear when it came to the question about the right of the Israeli state to exist. But of course, this could be complimented with the right to criticize Israeli government policy when it comes to the question of the conflict with, for example, Gaza. I think it’s important that you make a distinction between the Israeli government on the one hand, and the Israeli people – together with Jews all over the world – on the other hand.”However, he added, “there will be no criticism of the Israeli government tonight whatsoever… I wanted to take the political responsibility for the very rally itself away from small sectarian groups – that sometimes have been very unclear about the right of the Israeli state to exist – and put it in the hands of big and serious political parties that support the right for the Israeli state to exist.“ I personally, and the other parties responsible for this rally, have been very clear when it comes to condemn terrorist attacks against civilians in Israel or Jews in other parts of the world,” Hägglund said.Sjöberg accused Hägglund of contacting her about the memorial only after the Jewish community had already organized its own event.“I asked him to apologize and he said no,” she said.Sjoberg also lashed out at Lena Posner- Körösi, the head of the Official Council of Jewish Communities in Sweden. In an email to the Post, Posner- Körösi wrote that “the Jews of Umeå was asked to take part in commemoration, which turned out to be everything less than what the objective is and should be” and declined the invitation.“I’m very surprised,” Sjoberg said of the statement.Some critics have accused the organizers of using the event to promote agendas unrelated to the Holocaust.On the event’s Facebook page, organizers wrote that the “rally should be seen as a defense of Umeå as a city of openness towards people with different culture, religion and sexual orientation.As well as support for those forced to flee from war and hopes for a future in Umeå.”The Facebook post combined with the alleged decision not to invite the Jewish community led one local to post on the group stating that this year’s event constituted “memorial hijacking.”“For Umea’s left-wing politicians to choose Kristallnacht for a general anti-racism rally betrays startling insensitivity to the Jewish community and ignorance of the Holocaust’s history,” said Andrew Srulevitch, the Anti-Defamation League’s Director of European Affairs.“Ironically, Sweden has been a leader in promoting Holocaust education internationally and domestically.‘Fortunately, proper Kristallnacht commemorations are being held in Stockholm, Malmo, and elsewhere in Sweden. Umea’s event is an aberration, and we congratulate the political and civic leaders who will join the Umea Jewish community’s alternative Kristallnacht commemoration.”According to media reports, another gathering slated to be held at the university town of Uppsala also came under fire in Sweden when it was revealed that the promotional material did not include the words Jews or synagogues.