His "story continues to inspire everyone. It is one of miracle and hope overcoming tragedy and immeasurable loss," Modi wrote. 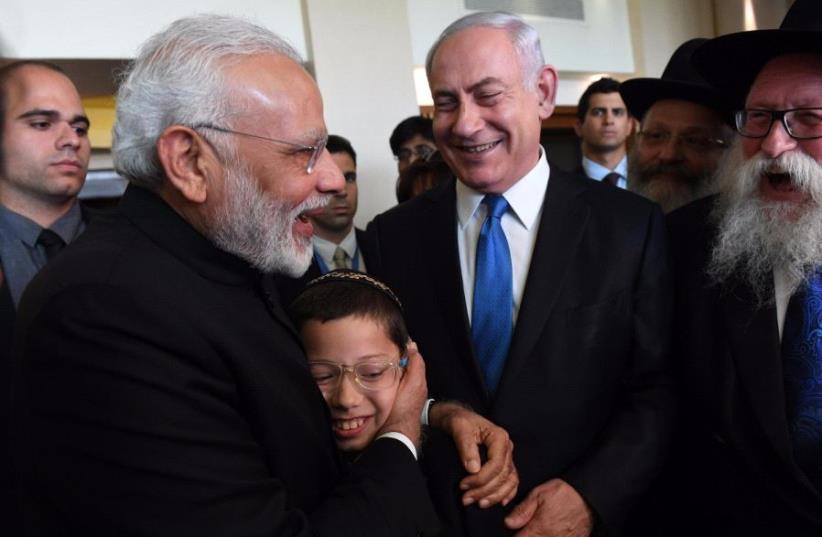 Visiting Indian Prime Minister Narendra Modi with Israeli youth Moshe Holtzberg 5th July 2017.
(photo credit: CHAIM TZACH/GPO)
Advertisement
Moshe Tzvi Holtzberg, who survived the 2008 terrorist attack in Mumbai, received high-profile congratulations on the occasion of his bar mitzvah on Sunday, with Indian Prime Minister Narendra Modi writing him a letter and Prime Minister Benjamin Netanyahu recording a video message.“As you make this important transition and cross a significant landmark in the journey of your life, the courage of [nanny] Sandra [Samuel] and prayers of the people of India will continue to bless you for a long, healthy and successful life,” Modi wrote.India’s Ambassador to Israel Sanjeev Singla read the letter at the boy’s celebration on Sunday night, which took place at Kfar Chabad. Singla brought the letter with him from India.In November 2008, Pakistani terrorist group Lashkar-e-Taiba carried out 12 attacks in Mumbai over four days, killing 165 people and wounding more than 300. Two terrorists targeted the Chabad House in Mumbai, holding eight Jews hostage and murdering them. Two of those killed were Moshe’s parents, Rabbi Gavriel and Rivka Holtzberg, the Chabad emissaries to Mumbai. Rivka was five months pregnant at the time.Sandra Samuel, Moshe Holtzberg’s nanny, saved the two-year-old’s life, running out of the building holding him after finding him next to his motionless parents. Holtzberg then moved to Israel to live with grandparents in Afula, and Samuel came with him, eventually receiving honorary Israeli citizenship.Modi wrote to Holtzberg that his “story continues to inspire everyone. It is one of miracle and hope overcoming tragedy and immeasurable loss. The perpetrators of the cowardly terrorist attack...clearly failed. They could not subdue our vibrant diversity. Nor could they dampen our spirit to march forward. Today, India and Israel stand together even more determined against terrorism and hatred.”Modi met Moshe Holtzberg during his visit to Israel in 2017.“I warmly remember meeting you in Jerusalem, along with Prime Minister [Benjamin] Netanyahu,” Modi wrote. “I hope that your wish to return some day to Chabad House in Mumbai as its director comes true.”Netanyahu said in a video posted to YouTube that “we know that life, revival and mitzvahs came out of this tragedy. You are here now with the love of the entire Jewish People, the citizens of Israel and many, many people abroad.”The prime minister’s wife Sarah Netanyahu said to Moshe: “Since you were two years old, you have been fighting to continue your life each day, but you are enveloped with your grandparents’ and family’s love. All of Israel is with  you.”Holtzberg joined Netanyahu on a visit to India in 2018, when they visited the Mumbai Chabad House and dedicated a memorial to the victims of the 2008 terror attack. Holtzberg said a prayer of thanks to God for sparing his life.Ahead of the Sunday night celebration, Moshe traveled to New York where he donned tefillin for the first time in the presence of his father’s family and friends. He also visited the grave of the last Lubavitcher rebbe, Rabbi Menachem Mendel Schneerson.