Interactive map illustrates uptick in antisemitism across the US

The interactive map, which was created by an investigative journalism organization, chronicles more than 150 antisemitic crimes committed across the US in the past months. 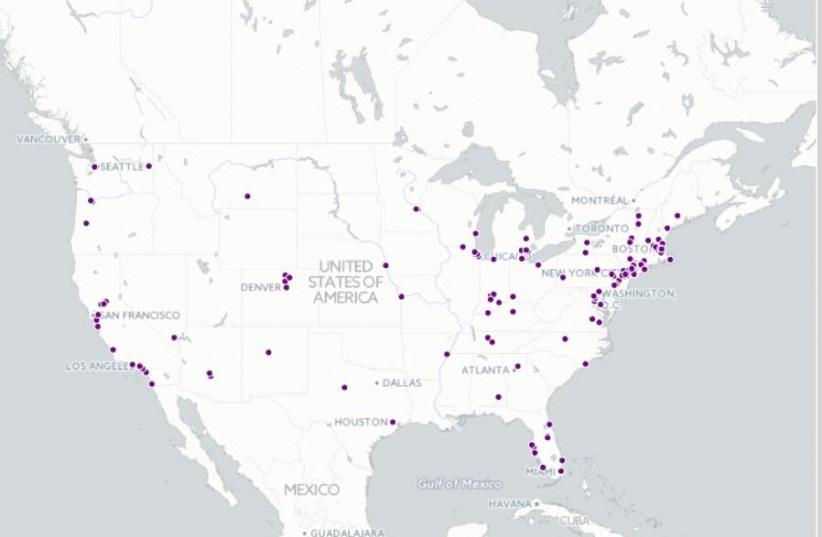 ProPublica's interactive map showing where antisemitic crimes were carried out across the US in recent months.
(photo credit: screenshot)
Advertisement
The investigative journalism nonprofit ProPublica has produced an interactive map that chronicles over 150 antisemitic crimes across the United States from the past few months.The graphic, which was published Wednesday, is a companion to an article ProPublica ran last week, “In an Angry and Fearful Nation, an Outbreak of Anti-Semitism,” which found evidence of over 330 incidents of antisemitism between last November and early February.Both are part of ProPublica’s “Documenting Hate” series, which the company launched last year to “gather evidence of hate crimes and episodes of bigotry from a divided America.”
Philadelphia Jewish cemetery desecrated by vandals , suspected antisemitism (credit: REUTERS)
The interactive map links each pin to local news reports from across the country, allowing users to access the original news stories for each instance of antisemitism. Most of the incidents involve vandalism, such as spray-painted swastikas and other defacement of public spaces.Other organizations have documented spikes in antisemitic incidents since the election of Donald Trump as president in November. The Southern Poverty Law Center recorded 100 incidents in the first 10 days after Trump’s election. The New York Police Department recorded 43 anti-Semitic incidents in New York City in the month after the election.JTA has reported in recent months that dozens of Jewish community centers across the country have been threatened with over 150 phoned-in or emailed bomb threats.The head of the Anti-Defamation League, Jonathan Greenblatt, said at a conference in November that public discourse in the United States on antisemitism was at its worst point since the 1930s.Trump was dogged by assertions during the campaign that he failed to condemn the antisemitism displayed by some of his supporters, such as former Ku Klux Klan leader David Duke. After avoiding the topic while being asked about it multiple times at news conferences and interviews, Trump condemned the attacks on JCCs late last month.