“The planet is this God-given gift we have responsibility for and we’ve been destroying it.” 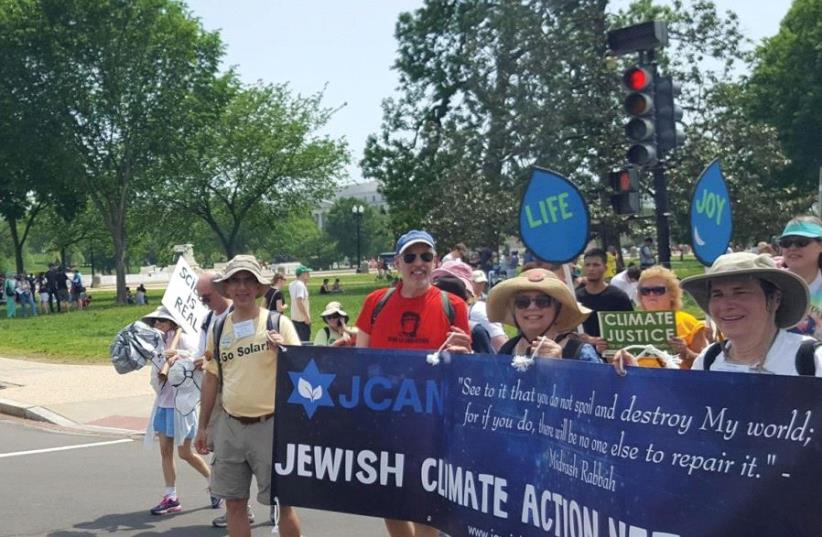 JCAN MEMBERS take part in the People’s Climate March in Washington in April.
(photo credit: Courtesy)
Advertisement
NEW YORK – Preserving the planet is a duty for the Jewish community, rabbis and activists told The Jerusalem Post.“From a Jewish religious standpoint the idea of stewardship for God’s world is incredibly important, and anybody who’s not the elected president of the United States knows that we’re not doing a great job at it in so many ways,” Rabbi Jeremy Kalmanofsky of the Conservative Ansche Chesed synagogue on Manhattan’s Upper West Side said last week. “There is a religious value, that we consider a mitzva, to not destroy natural resources.”Since President Donald Trump announced on June 1 that the US would withdraw from the Paris Agreement on climate change, the decision has stirred up public opinion including within the Jewish world, with organizations publicly denouncing the move. In Israel, too, Trump was criticized as officials reiterated the seriousness of climate change.
Trump pulling US out of Paris climate deal (credit: REUTERS)
“I would think that there is a nearly unanimous feeling in my congregation against [Trump’s] move,” Kalmanofsky said. “There is no support in our community for this maneuver.”Although he avoids politics when speaking from the pulpit, climate is important to Kalmanofsky’s congregation. It has joined the Jewish Climate Change Campaign, an effort to push the community to raise awareness and take action.“We talk about environmentalism, we go on the marches, we do our best to have our own building at home be green, we also do organic agriculture in the community,” the rabbi told the Post.The issues surrounding global warming and the environment are deeply rooted within Judaism and particularly in the concept of creation, he said.“The value of creation from a religious standpoint is to say that God created a good world and the human responsibility is to steward that world and to take care of it,” Kalmanofsky said. “If you look in the Torah, Adam is placed into the garden to tend it and guard it. He’s got a role being placed there, he’s got to take care of it.”Boston-based Rabbi Katy Allen co-founded the Jewish Climate Action Network (JCAN) in 2013.The organization is working to develop a network of synagogues around issues of sustainability and climate change.“The planet is this God-given gift we have responsibility for and we’ve been destroying it,” she told the Post. “It’s about our relationship with God, as well as our relationship with the Earth, as well as our relationship with other people.”According to Allen, one can also look at climate change from a social justice perspective, intrinsic to Jewish values.“We need to be caring about people who are being impacted by the fact that we want to have another whatever in our lives,” she said.In addition, caring for the environment aligns with the Jewish people’s constant struggle for continuity and concern for the well-being of future generations, Allen said.“What’s not Jewish about any of those things?” she asked.Some have gotten involved after experiencing climate change’s effects first hand.Scott Lewis, a resident of Florida, works with the Higher Ground Initiative, a Jewish group focusing on raising awareness about the threat of rising sea levels.“In South Florida, we know that’s going to be an issue for a lot of Jewish congregations that are located near the coast,” he told the Post, pointing out that these communities could experience significant flooding.“We need to be aware that this is connected to climate change, and this is something we should be concerned about as a Jewish community, because there are so many Jews not only in this country, but obviously in Israel, too, who are close to the sea.”Through the Higher Ground Initiative, Lewis tries to educate congregations about the matter.Although he said he is disappointed by Trump’s decision regarding the climate, he is not surprised.“We knew after he got elected that there were going to be significant changes and impacts on the federal support for fighting climate change,” Lewis said. “It’s really unfortunate.”Allen’s organization, JCAN, has been helping synagogues do their share in the effort to preserve the planet by evaluating their food practices, setting energy spending goals, and looking at other issues relating to the sustainability of the synagogue.“This is what we ended up coming to as a way to engage with synagogues, and then we try to connect them to each other,” the rabbi said. “A lot of times, there are a lot of roadblocks for this within a synagogue; there might be some people who are willing [to participate] and some people who are not.“A lot of it is just raising awareness and getting the conversation going in synagogues,” she said.“I think that the Jewish community has been slower to come to this than some of the other faith communities, but if we look back even two years, there has been change. There are a lot more getting on board now.”On April 29, JCAN participated in the People’s Climate March on Washington that drew hundreds of thousands of people to the US capital.Marching there, Allen said, was a way of showing that the community is taking on moral leadership.“When people who care about this see there is something happening in the Jewish community, it really makes a difference,” she said. “Otherwise, they wonder where is my community? They don’t care? “To me that’s a big huge piece of why we need to exist: to let people know that the Jewish community is worrying about it,” the rabbi said.“Even if we don’t have the solution at least we are trying to do something.”