'Israel was created by the Rothschilds, not God,' Labour member's post reads

Website Guido Fawkes quotes a source in the Labour Party as saying "it is the worst we have ever seen." 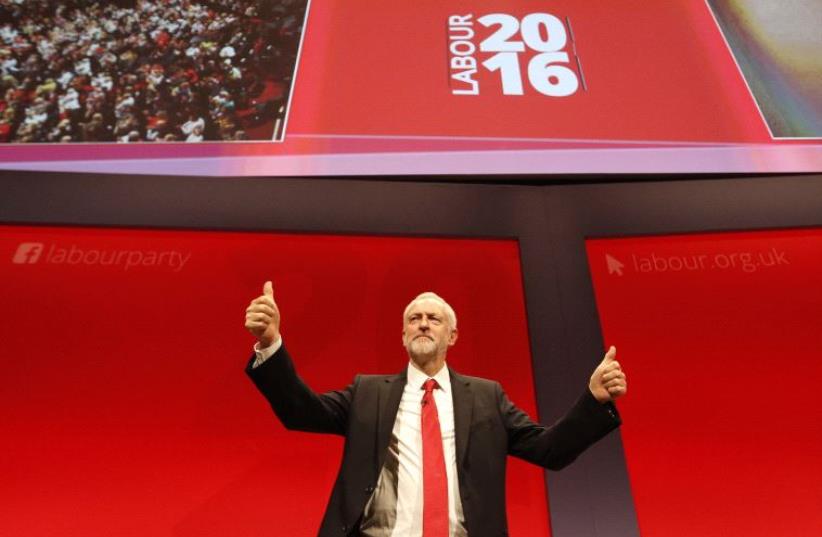 DATE IMPORTED:September 28, 2016Britain's Labour Party leader Jeremy Corbyn gestures after delivering his keynote speech at the Labour Party conference in Liverpool, Britain, September 28, 2016.
(photo credit: REUTERS)
Advertisement
A British Labour Party activist has posted an antisemitic meme on his Facebook page in the latest scandal to hit the party, which has been plagued by antisemitic incidents under the leader of Jeremy Corbyn.The Labour Party member in question, Andy Slack, a councillor from Chesterfield, shared a graphic featuring a hook-nosed IDF soldier with a bloody mouth and reading "Israel was created by the Rothschilds,562310 not God." The UK political website Guido Fawkes brought Slack's September 30 post to light and it was subsequently deleted from his page."And what they are doing to the Palestinian people now is EXACTLY what they intend for the whole world," the post adds.The post originally appeared on antisemitic website smoloko.com. It warns readers, "Today it is a Palestinian child, soon it will be your child."Fawkes quoted a source in the Labour Party as saying "it is the worst we have ever seen."A number of Labour Party members have been suspended from the party in the past year for sharing antisemitic memes or making antisemitic statements. Corbyn commissioned a report on antisemitism in the party, Fawkes quoted a source in the Labour Party as saying "it is the worst we have ever seen."" target="_blank">which critics claimed white-washed the issue.It was not immediately clear if Slack would be suspended for sharing the antisemitic post, however Labour has vowed to have a no tolerance policy for antisemitism.