A police officer wades through the Hurricane Harvey floodwaters in Alvin, Texas August 29, 2017.
(photo credit: RICK WILKING / REUTERS)
Advertisement
Ramit Plushnick-Masti and Rafael Masti woke up at 4:30 on Sunday morning to find their bathroom floor in Houston full of water.“We started waking up the boys,” Plushnick-Masti, who has three sons ages 10, 14 and 15, recounted on Tuesday, days after Hurricane Harvey hit Texas. “Within 15 minutes, there was water going into all of the bedrooms. We started putting towels under the doors – it seemed like a good idea at the time – but the water came in so fast.”At that point, the family began taking irreplaceable items, like family albums, that were close to the floor and moving them to upper shelves.Plushnick-Masti is director of communications at Houston Forensic Science Center and a former journalist who lived in Israel for 10 years, working for Reuters and the Associated Press, among other outlets.Her husband, Masti, is Israeli.She began frantically texting neighbors and friends to see where they could go. One neighbor had much more water and had already called for rescue more than an hour earlier. 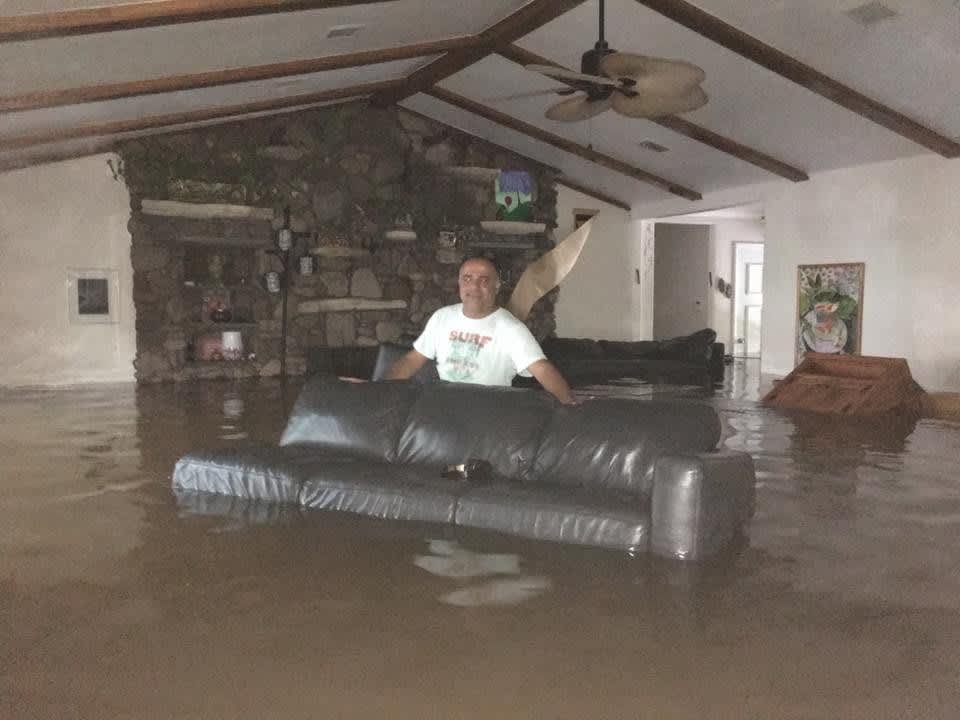 A scene from inside the Plusnik-Masti house (Ramit Plusnik-Masti)“I decided we could wait a little longer. It appeared that the rain was slowing down, and we thought there have to be people worse off than us, like elderly or disabled people – people with babies. But, by 7:30, we said we have to call for rescue,” Plushnick-Masti said.The family packed up necessities in plastic bags and called emergency services, at which point they were put on an evacuation list.“Now, it was just a waiting game,” Plushnick-Masti recalled. “By then, the water was at my knees.I got up on the kitchen counter with my youngest son. Everyone picked a corner – one lay on the dining room table, one on a bed that was floating and we just sat.”They waited and watched the water rise, posting pictures on Facebook to pass the time and checking on friends and colleagues to see if they were alright.At 11:30, when her sons were growing more nervous, Plushnick-Masti called emergency services again, and it was apparent that they were overwhelmed by the number of people needing to be rescued.Plushnick-Masti took to social media to find help, and her plea was shared many times. A friend then sent her a message that Rabbi Barry Gelman of United Orthodox Synagogues of Houston had a boat and was rescuing people, so she texted him and was put on the list.Then, she sent her two oldest sons to the roof to flag down boats, and they saw the rabbi coming by at around 2 p.m.Plushnick-Masti said: “In the house, water was up to my waist, but outside my youngest son and I had to swim. The water was at everyone else’s shoulders.”Gelman brought the family to a church a few blocks away, which was dry but had no power, and was taking in what Plushnick-Masti called “Harvey refugees.”“We waded through knee-deep water to get into the church with garbage bags full of stuff on our shoulders like refugees,” she said.“We didn’t have any blankets and slept on the floor.”The next day, a friend picked them up with a pickup truck, and they spent the night at other friends in Bellaire, a town inside Houston.“We’re hoping to get to our parents who live outside Houston, in Sugar Land, but their reservoir might overflow. The rain just won’t stop,” said Plushnick-Masti.Gelman was not the only Jewish leader in Houston rescuing people.Bnei Akiva emissary Rafi Engelhart saved eight people using an inflatable rowboat.Meanwhile, Chabad warned that the city’s kosher food supply was running out, with flooding shuttering the four largest supermarkets that carried kosher meat, poultry and milk.Chabad-Lubavitch of Texas Regional Headquarters drove in kosher supplies from Dallas, Miami and New York, hoping to have a kosher food pantry available to the Jewish community by week’s end.“It’s a matter of days until we have no milk and other basics,” said Rabbi Yossi Zaklikofsky of Chabad of Bellaire. “If we don’t get food down here, this will become a big problem fast.”Chabad and Jewish Family Services, among other Jewish organizations, set up relief funds. The Ramaz School in New York set up a fund and boxes to collect underwear, socks and cleaning supplies to send to Texas.