Glanz, a hardcore BDS activist, said it would not be absurd to eradicate Israel and relocate Jewish Israelis to the German state of Baden-Württemberg. 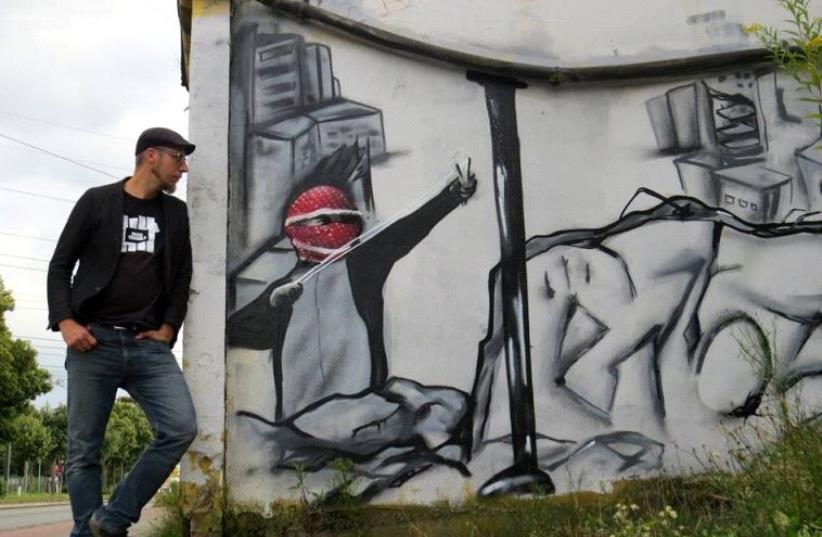 Teacher Christoph Glanz stands next to Palestinian slingshot graffiti.
(photo credit: FACEBOOK)
Advertisement
Israel’s embassy in Berlin slammed a German public school teacher for incitement of hatred against Jews on Wednesday because of his promotion of a photograph stoking violence against Israelis. “A teacher´s mission is to educate pupils and not to incite or to openly sympathize with violence. In his [Christoph Glanz] so called manifest he has committed himself to the BDS movement which does not recognize the right of existence of the State of Israel. A proof to that can be easily found on official websites of BDS, ” wrote the embassy to The Jerusalem Post. The embassy added, “This antisemitism has no place in the 21th century, especially not in Germany where incitement of the people (Volksverhetzung) is against the law.” Glanz, a teacher in the northern city of Oldenburg, posted a picture on his Facebook page of himself standing next to a stone mural, which depicts a Palestinian wearing a keffiyeh and aiming a slingshot.Glanz, who uses the false identity Christopher Ben Kushka on his Facebook page, wrote above the photograph: “feeling definitely not neutral.” The words on Glanz’s T-shirt in the photograph read “Make Trouble.” Glanz’s Facebook post was liked 34 times and shared once. It is unclear if his students read and endorsed the violent post. Glanz, a hardcore BDS activist, said it would not be absurd to eradicate Israel and relocate Jewish Israelis to the German state of  Baden-Württemberg. BDS is the abbreviation for the Boycott, Divestment, Sanctions movement targeting the Jewish State. The German word Volksverhetzung is codified in German criminal law and is usually translated as incitement to hatred. The term applies to Holocaust denial, as well as racism, antisemitism and xenophobia. Palestinian rock-throwers caused a vehicle carrying the Biton family to crash in 2013, wounding four-year-old Adele Biton, who died of her injuries in 2015. At least 14 others have been killed by stone-throwers. The alleged endorsement of Palestinian violence against Jewish Israelis by Glanz has triggered calls for his immediate removal from the classroom. Post telephone queries to his school Integrierte Gesamtschule Flötenteich and home were not returned. Glanz’s organization, BDS Oldenburg, published on October 13 a statement on the BDS-Kampagne website stating: “The accusations against Christoph Glanz are entirely untrue. Legal measures concerning this matter will be examined." The group BDS-Kampagne’s representative Doris Ghannam has ties to the terrorist group The Popular Front for the Liberation of Palestine.In December 2014, Ghannam and BDS-Berlin delivered a talk to celebrate the founding of the PFLP. The Post located a YouTube video of the pro-PFLP speech from Ghannam. In August, Glanz wrote on on his Facebook page "BDS Berlin rocks Galeria Kaufhof mall again- kudos! [...]".BDS Berlin activists urged customers in front the Berlin department store Galeria Kaufhof to boycott Israeli products. It is unclear if Glanz has ties to the PFLP. The school authorities in the state of Lower Saxony, where Glanz teaches, launched an investigation into his alleged misconduct. Tanja Meister, a spokeswoman for Lower Saxony state's Education Ministry, told the Post, on Tuesday that the authorities need time to conclude the investigation. She wrote the PFLP “information was sent to the person handling the examination” of Glanz. The PFLP has used suicide bombers to murder scores of Israelis and hijacked American and Israeli planes. The European Union, Canada and the US classify the PFLP as a terrorist entity. In February, the DAB bank in Munich terminated the bank account of BDS-Kampagne. The Post learned that the boycott group’s link to Palestinian terrorism and discrimination against Jews played a role in the bank account closure.