Israeli flag defaced with swastika in front of Massachusetts synagogue

“This should be a wake-up call for everyone who lives on Cape Cod,” Rabbi Elias Lieberman of the Falmouth Jewish Congregation told the Cape Cod Times. 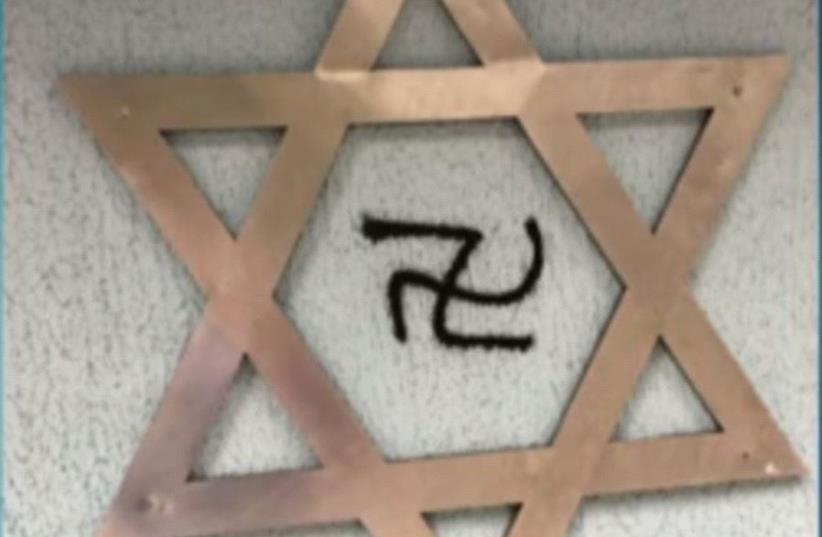 Swastika painted on Rio Jewish Club
(photo credit: SCREENSHOT/ GLOBO TV)
Advertisement
An Israeli flag was found defaced with a swastika and the numbers “14” and “88” in front of the Falmouth Jewish Congregation in Cape Cod, Massachusetts on Thursday, hours after Yom Kippur ended.The “14” on the flag stands for the white supremacist slogan, “We must secure the existence of our people and a future for white children,” while “88” is shorthand for “Heil Hitler” because “H” is the 8th letter of the alphabet. Rabbi Elias Lieberman of the Falmouth Jewish Congregation told the Cape Cod Times that he believes the “flag initially was spread out in the courtyard or near the pavement by the main entrance” before it was blown into the bushes, where he found it.“This should be a wake-up call for everyone who lives on Cape Cod,” Lieberman said. “The Cape is not the picture-perfect postcard people like to think it is, or for that matter, any place in the country.”Lieberman sent photos of the flag to the Falmouth Police Department and the Anti-Defamation League New England office, both of which are investigating the incident, the Cape Cod Times reported. The rabbi added that police have started increasing patrols.“Historically, the best response to existential threats to us as Jews is to live fulfilling Jewish lives,” Lieberman said, adding that the flag incident was the first time he felt his community was targeted in his 30 years as a rabbi in Falmouth.On October 4, swastikas and sexual images were found in parking spaces at Sandwich High School, which is located 14 miles from the synagogue. That incident is under investigation and appears not to be connected with the flag at the synagogue, Sandwich Police Chief Peter Wack told the Cape Cod Times.“I was heartbroken,” Rev. Nell Fields, a leader at Waquoit Congregational Church and a member of the steering committee for No Place for Hate Falmouth, told the Cape Cod Times. “It’s hateful, it’s frightening, and fortunately we are not talking about a shooting, but we are talking about our town, our community and our friends. We cannot normalize this. The only way to stop that is to point out and say it’s wrong and let’s do better.”