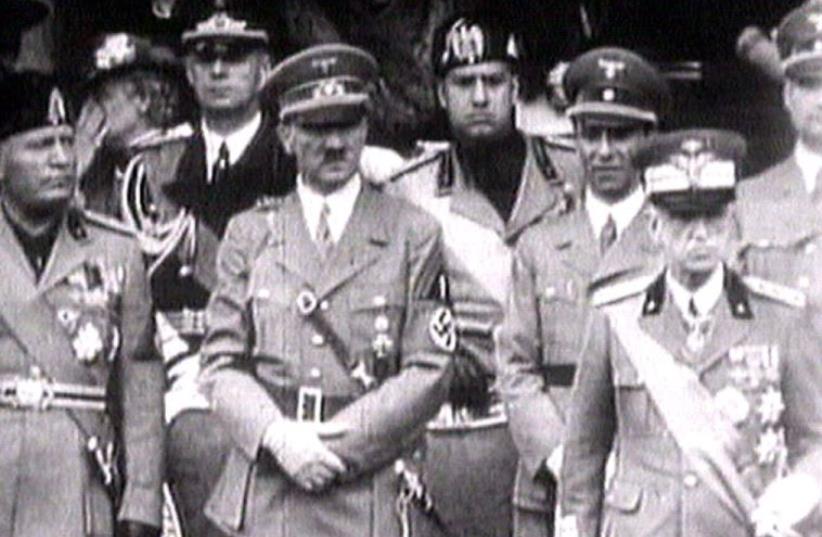 King Victor Emanuel III, (R) Adolf Hitler (C) and Benito Mussolini (L) watch fascist troops march past from a balcony in central Rome in this 1941 television file footage
(photo credit: REUTERS)
Advertisement
The Italian government has released thousands of previous classified documents related to fascist and Nazi war crimes committed in Italy during World War II.The documents were declassified from a parliamentary commission that had investigated the concealment of files related to these crimes. Specifically, the commission had dealt with what was dubbed the “cabinet of shame” – a wooden cabinet discovered in 1994 in a storeroom of the military prosecutor’s headquarters in which 695 files on war crimes had been hidden for decades.The documents concerned specifics of crimes ranging from anti-Jewish persecution to massacres of civilians that in total had resulted in 15,000 deaths.On Tuesday, the historical archives of the Chamber of Deputies put an index of some 13,000 pages of material on its website. The documents include declassified material from the investigating commission as well original documents that had been hidden in the “cabinet of shame.”  Users can consult the online index and request digital copies of specific documents.Renzo Gattegna, the president of the Union of Italian Jewish Communities called the move a “historic breakthrough.” Opening the “cabinet of shame” to the public, he said, “fills a serious gap and announces the start of a new season of awareness about the crimes and responsibilities of fascism and Nazism in Italy.”